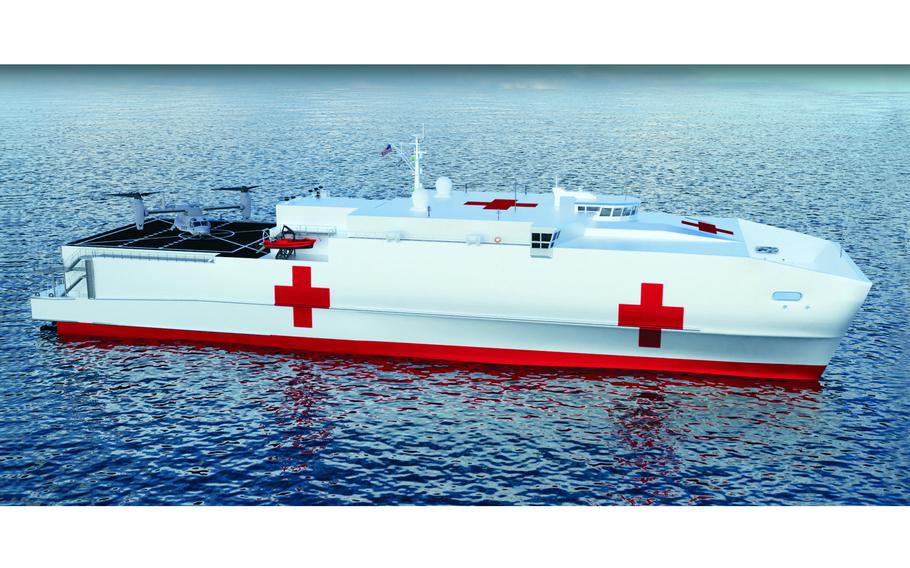 A concept image by shipbuilder Austal USA shows the expeditionary medical ship to be built for the U.S. Navy. (Austal USA)

The massive defense spending bill signed into law last month includes funding for a new breed of Navy medical ship with the speed and agility to serve more as ambulance than hospital.

The vessels, dubbed expeditionary medical ships, will be built by Austal USA in Mobile, Ala.

The design is based on the Navy’s existing expeditionary fast transport vessels, which are capable of operating in shallow waterways and can moor in austere port conditions.

Fast transport ships are used by the Navy to “support a wide range of operations including maneuver and sustainment, relief operations in small or damaged ports, flexible logistics support, or as the key enabler for rapid transport,” according to an online Navy fact sheet.

“We took the best of the EPF concept, such as high speed and shallow draft, and put it into bigger platform,” Larry Ryder, vice president of development and external affairs at Austal USA, told Naval News. Ryder was interviewed at the Sea Air Space show in Maryland, where the company unveiled the design in August 2021.

An expeditionary medical ship is a “smaller package” but with all the capabilities of the Navy’s two hospital ships, USNS Comfort and USNS Mercy, Ryder said.

Ryder said the concept would allow the Navy to field a much greater number of medical ships globally, which could then quickly reach hotspots should the need for more hospital beds arise.

The 417-foot-long catamaran-style expeditionary medical ship will have three operating rooms and 66 beds, six designed for intensive care, according to an Austal fact sheet.

The ship will have a top speed of just over 30 knots and a range 5,500 nautical miles, Austal said.

The ship’s deck is big enough to land a tilt-rotor Osprey.

By comparison, the USNS Comfort, at almost 900 feet long, has 12 operating rooms and 1,000-bed capacity if double-bunked in the event of mass casualties. Its top speed is just over 17 knots.

“I don’t think it makes sense to have one big thousand-bed facility rather than two or three ships spread out really supporting the forces,” Ryder told Naval News.

A hospital ship that can weave through shallow-water littorals dovetails with the emerging focus by the Navy and Marine Corps on a potential conflict with China in and around the South China Sea.

Both services are moving toward the concept of dispersing forces throughout a battlespace in lieu of a concentration of ships or troops.

The Navy has in recent years moved toward decommissioning at least one of the existing hospital ships but has been stymied by lawmakers. Navy officials cite the high cost of maintaining the aging ships and that they don’t fit the paradigm shift to a more agile force.

“The problem with those ships is, there’s only two of them and they’re big, and we’re moving to a more distributed maritime operations construct,” Vice Adm. Bill Merz, deputy chief of Naval Operations for Warfare Systems, told the House Armed Services during a hearing in 2018.

The Navy expects delivery of the first expeditionary medical ship by December 2026, with two more to follow, according to a report published Thursday by Sandboxx News.