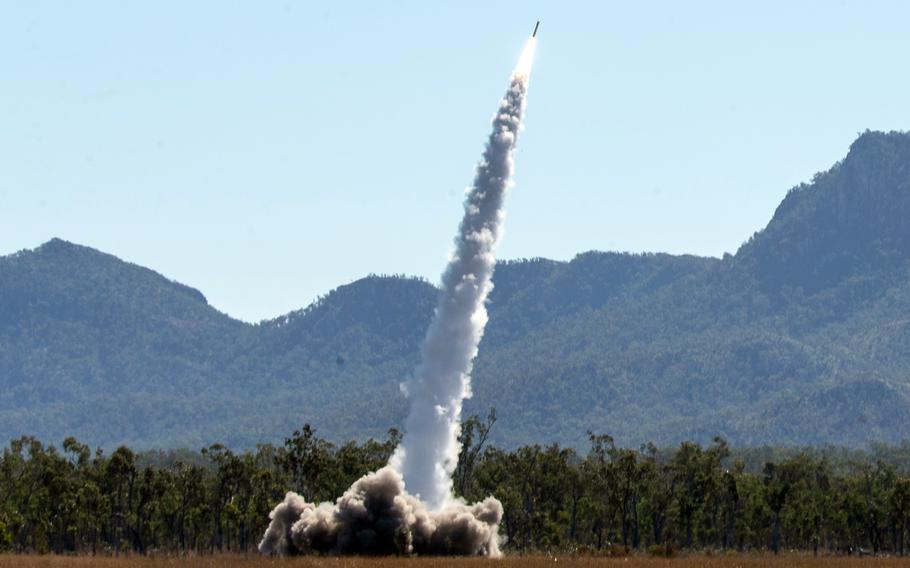 Australia is buying the same type of U.S.-made long-range missile systems that have helped Ukrainian forces even the odds against invading Russians.

Marles didn’t state how many systems Australia will acquire. However, in May the U.S. State Department approved a potential foreign military sale to Australia of 20 HIMARS and related equipment at an estimated cost of $385 million.

The Australian announcement followed a HIMARS strike by Ukrainian forces on New Year’s Day that killed more than 80 Russian troops.

Australia is taking a proactive approach to defense and “HIMARS launchers will give our Defence Force the ability to deter conflict and protect our interests,” Marles said.

Australia has strengthened its alliances and military capabilities in recent years amid concerns about China’s rapid military buildup, occupation of disputed territory in the South China Sea and efforts to gain influence in the South Pacific. For example, Australia joined the U.S. and United Kingdom in the AUKUS defense pact in September 2021.

HIMARS munitions have a range of up to 186 miles, which is expected to increase with technological advances, according to the Australian announcement.

Australian company CEA Technologies is delivering the Lockheed Martin-designed system that includes a radar to detect and respond to land, air and maritime threats, according to the announcement.

U.S. forces in the Indo-Pacific have trained regularly with HIMARS in recent years, including during the biennial Talisman Sabre drills in Australia in 2021.

In August, an Air Force Special Operations C-17 Globemaster III delivered a HIMARS launcher to an airfield on the Indonesian island of Sumatra where troops drilled on the steps to rapidly fire the weapon.

Marines in October fired HIMARS launchers on the Philippines’ main island of Luzon and on Japan’s northern island of Hokkaido.

The Defense Department, which has sent 20 HIMARS to Ukraine to help battle Russian invaders, on Oct. 4 announced shipment of four more launchers.

Australia’s Defence Department has also contracted with Kongsberg Defence & Aerospace of Norway for the Naval Strike Missile, which will be employed on the Hobart-class destroyers and Anzac-class frigates from 2024, according to the Australian announcement.

Australian forces would most likely use the HIMARS in an expeditionary conflict where it would be airlifted into a theater, according to Paul Buchanan, a U.S. security expert based in New Zealand.

“It might be used against ships approaching Australian land positions, but the Australian navy has enough capability to… interdict hostile ships on its own,” he said by email Thursday.

“Strong allied support of this type has the potential to strengthen the deterrence and defense of regional neighbors and friends in ways they may not be able to provide themselves,” he said by email Thursday.