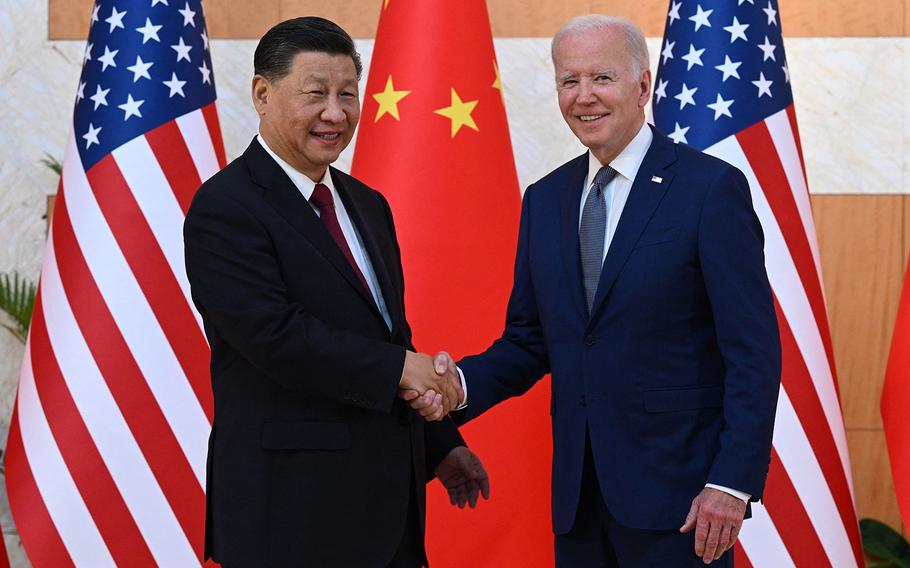 U.S. President Joe Biden, right, and China’s President Xi Jinping shake hands as they meet on the sidelines of the G-20 summit in Nusa Dua on the Indonesian resort island of Bali on Nov. 14, 2022. (Saul Loeb, AFP via Getty Images/TNS)

(Tribune News Service) — New Chinese Foreign Minister Qin Gang sought better Sino-U.S. ties in a phone conversation with Secretary of State Antony Blinken on New Year’s Day, according to a statement from the Ministry of Foreign Affairs in Beijing.

Qin, who served as China’s ambassador to the U.S. prior to his new job, looked forward to maintaining a close working relationship with Blinken, the ministry said in the statement Monday. Blinken separately said on Twitter that the two discussed “maintaining open lines of communication.”

The change of guard at China’s Foreign Ministry comes as Beijing shows signs of moving back to a lower-key diplomatic strategy following a growing backlash against its confrontational style. The two rivals have clashed over a variety of topics ranging from trade to technology, while continued U.S. support for Taiwan has remained a key source of tension with China, which regards the self-governed island as part of its territory.

The exchange of pleasantries indicates that Blinken is still set to visit Beijing soon to follow up on a November summit between Joe Biden and Xi Jinping, the first face-to-face meeting between leaders of the world’s biggest economies since before the pandemic. In recent weeks the U.S. and China again sparred over American military support for Taiwan.

Beijing’s more assertive foreign policy has contributed to a collapse in public support across the developed world during Xi’s decade in power, with the share of people in the U.S. who hold unfavorable views of China rising to 82% in 2021.

In a previous role as the Foreign Ministry spokesman, Qin, 56, has delivered some of China’s most moderate messages on hot topics. He has said Beijing would have tried to stop the invasion of Ukraine had it known Russia’s plans, and he’s played down the risk of a war with Taiwan.

With assistance from Ocean Hou.