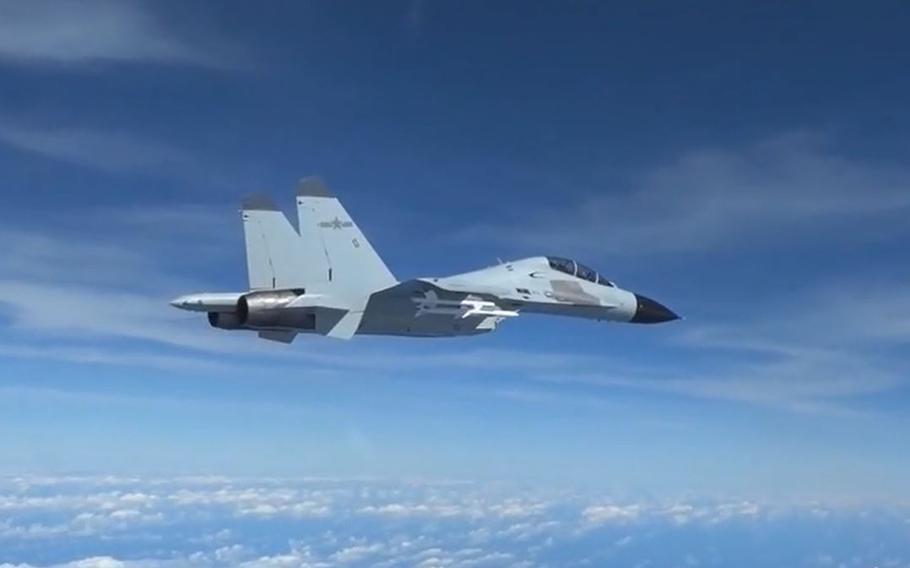 The U.S. military accused a Chinese fighter jet of flying within a mere 10 feet of a U.S. Air Force plane during an intercept last week over the South China Sea.

U.S. officials said a People’s Liberation Army Navy J-11 fighter maneuvered within about 10 feet of a U.S. RC-135 Rivet Joint reconnaissance plane’s wing during the intercept Dec. 21. The Chinese jet then cut in front of the American plane, coming within about 20 feet of its nose, according to a Indo-Pacific Command statement released Thursday.

The American pilot was forced to “take evasive maneuvers to avoid a collision,” Indo-PACOM said in the statement, which labeled the Chinese maneuver “unsafe.”

Video released by the Pentagon on Thursday appears to show the Chinese fighter closely approaching the American jet on its left, before briefly cutting in front of the RC-135 and veering back away to the left. The video appears to be shot from inside the RC-135.

Indo-PACOM said the RC-135 was conducting lawful, routine flight operations over the South China Sea when it was approached by the J-11.

The incident is the latest in a series of tense encounters between the U.S. and Chinese militaries in and around the South China Sea, parts of which China claims as its own.

The Pentagon has warned such close encounters can lead to accidents or miscalculations. Defense Secretary Lloyd Austin in June called recent increases in such unsafe interactions between Chinese and U.S. aircraft and Naval vessels “alarming.”

Last month, Austin raised the issue with China’s Defense Minister, Gen. Wei Fenghe, the Pentagon said in a readout of the Nov. 22 meeting.

Austin called for increased communications between the two powers to increase operation safety because of the “increasingly dangerous behavior demonstrated by PLA aircraft in the Indo-Pacific region that increases the risk of an accident,” according to the readout.