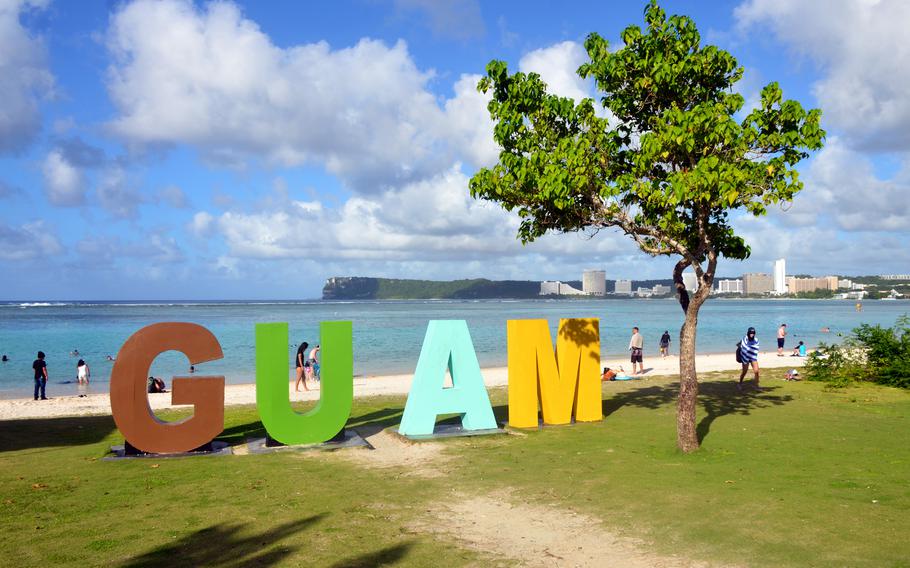 TUMON BAY, Guam — The warm, sandy beaches and crystal-clear waters of Guam are once again hosting visitors from around the world, a sign that the island’s critically important tourism industry is steadily recovering from the pandemic.

With most travel restrictions eased, the island mask mandate lifted and nearly 85% of its 170,000 population fully vaccinated, Guam is beckoning travelers. But only last year, the industry measured its worth in fractions of its 2019 numbers, thanks to COVID-19.

Only 61,000 people visited the island in 2021, a mere 4% of the 1.6 million tourists that arrived on Guam in 2019, according to the 2021 Transportation Safety Administration Economic Impact report. Tourism dollars fell to about 13% of the $2.4 billion generated two years earlier and nearly half of the 23,100 jobs sustained by tourism had evaporated.

Today, the tourism tide is rising again. Visitors to the island have increased to around 200,000 people so far this year, Gerald Perez, vice president of the Guam Visitors Bureau, told Stars and Stripes on Dec. 6.

“You can see that we’re ramping up very quickly,” he said.

Tumon Bay — a tourist favorite because of its restaurants, shopping, hotels and extensive beach front — has been a “ghost town” over the past few years, according to Andrew Brunson, head brewer at The Guam Brewery, and assistant manager Geremy Grey.

Grey, 30, moved to Guam two years ago from New York in the middle of the pandemic. He said the difference between then and now is unmistakable.

“The beaches were empty, all the restaurants were shut down and, obviously there wasn’t a tourist in sight,” he said of 2020 and 2021. “Over the last few months, I’ve seen a lot of tourists come back.” In June, the most recent data available, Guam’s unemployment rate had fallen to 4.8%, closer to the pre-pandemic low of 3.6% and significantly lower than 19.4% in December 2020.

Factors encouraging the economic recovery are numerous but include recently reduced pandemic restrictions and a high vaccination rate, Perez said.

Situated nearly 4,000 miles from Hawaii and a mere 341 square miles in size, Guam relies heavily on tourism. In 2019, the industry represented 60% of the island’s annual business revenue, according to the visitors bureau.

Worldwide tourism was riding high on the eve of the pandemic and represented 10.3% of GDP, a share that fell to 5.3% in 2020, according to the World Travel and Tourism Council. The pandemic, with its travel restrictions, lockdowns and closed borders, erased much of that.

“We saw basically a complete collapse, over a 95% drop” in visitors, Perez said. “With the volume of visitors we had here, the cash flow we had to the island was roughly $200,000 per hour at the height. So, imagine a spigot of cash being turned off. You can see why there was an awful lot of hurt immediately.”

This year, many barriers to travel either eased or vanished. In March, Guam officially rescinded all quarantine requirements for visitors; by May, territorial Gov. Lou Leon Guerrero ended a mask mandate in place since December 2020. Guam’s population of nearly 170,000 was 92% fully vaccinated as of Oct. 28, according to the most recent report from the Pacific Island Health Officers Association. “During the height of COVID, we tried an innovative concept called ‘Air VnV,’” Perez said. “Come to Guam and get vaccinated and then spend your vacation here.”

The program worked well for a time, drawing in large numbers of Taiwanese and U.S. residents with dual citizenship in Indo-Pacific countries, but issues with visas and quarantine requirements put the campaign to bed.

The bureau has since pivoted to new strategies, including ad campaigns on social media and inviting a group of more than 100 social media influencers from Japan — part of a bid to rebuild Guam-Japan relations.

Looking ahead, Perez predicts a significant increase in visitors next year. The bureau’s estimates for 2023 range from 535,000 to 670,000 visitors, which represents a 167% uptick on the conservative end.

“Compare that to this year's performance, you can see we're really ramping up in terms of what our expectations are,” he said.

The island is also reevaluating how it markets itself. Over the past few decades, tourism has largely centered on Tumon Bay. Now, the bureau is working with Guam’s 19 villages to expand tourism into new areas.

“Tourism is like fashion, right? You either renew your product, or you get old and tired,” Perez said. “That’s our main focus now, changing from a Tumon-centric stage to making the whole island the center stage of tourism.”

Perez hopes to highlight the uniqueness of each village, including individual specialties, cultures and histories. He hopes this will renew interest in Guam and benefit the island’s 170,000 residents.

“Tourism is not for the airlines or the hotels, it’s for the people. They own this business,” he said. “The fruits of tourism really ought to ultimately benefit the people.”