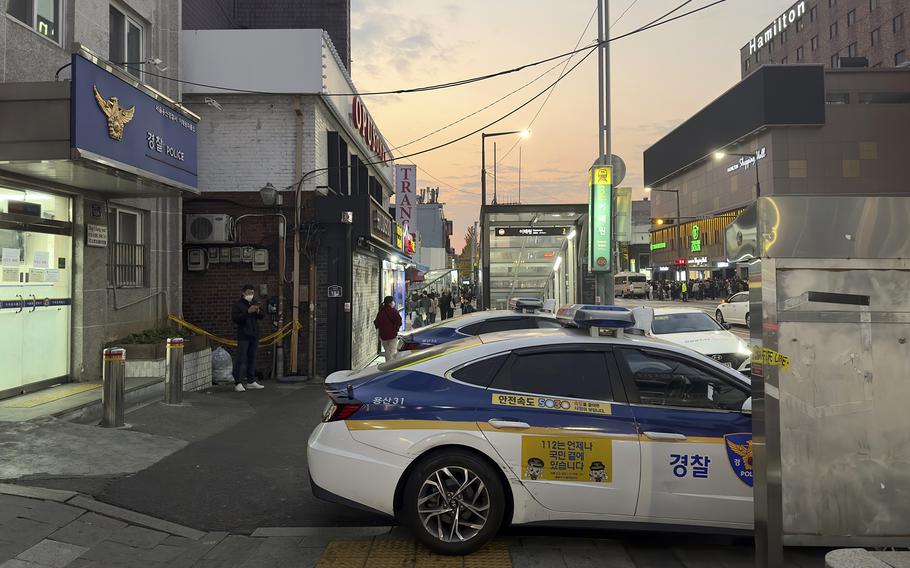 A police station in the Itaewon district of Seoul, South Korea, Oct. 31, 2022. (David Choi/Stars and Stripes)

CAMP HUMPHREYS, South Korea — Police in a city south of Seoul accused a U.S. service member of punching a woman taxi driver late last month after she asked for her fare.

The service member started “bickering over the cab fare” early Nov. 27 and assaulted the driver outside a convenience store near the gate to K-16, a U.S. Army airfield southeast of the capital, according to police in Seongnam city.

Police did not rule out the possibility that the service member was drunk, an officer with the Criminal Affairs Division in the Sujeong district told Stars and Stripes by phone Wednesday.

The officer declined to provide any further information about the service member, including whether he was arrested. South Korean officials customarily speak to the media on the condition of anonymity.

A spokesman for U.S. Forces Korea said the command is cooperating with the South Korean police investigation into the incident.

USFK takes “all reports of inappropriate behavior seriously,” spokesman Wesley Hayes said in an email Wednesday to Stars and Stripes. He declined to provide additional information due to the ongoing investigation.

Video footage from the taxi aired by the Seoul Broadcasting System showed the passenger attempting to open the door while the taxi was moving. After arriving at the air base, his credit card was declined by the taxi's register, the driver told SBS in a news segment broadcast Sunday.

The service member then went to a nearby convenience store to withdraw cash, the driver told SBS. She said he then started punching her face and body, according to the SBS report.

Video and audio from the taxi's recording system showed the service member landing several punches on the driver, who screamed for help in Korean.

Hayes said “this type of alleged behavior does not represent USFK’s values or the respect we hold for Korean people and their culture.”