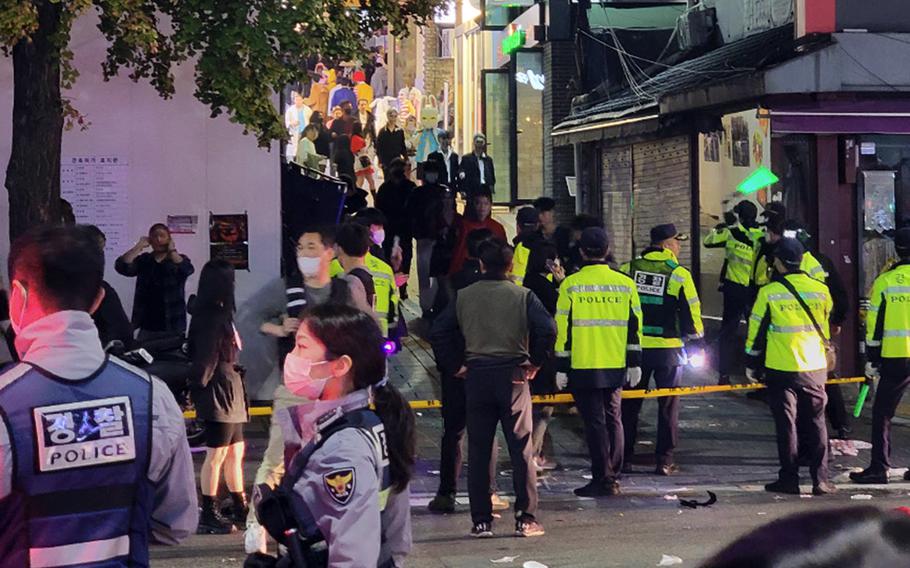 At least 158 people were killed and dozens were injured in a crowd surge in the Itaewon district of Seoul, South Korea, Oct. 29, 2022. (Riley Watts)

CAMP HUMPHREYS, South Korea — Riley and Allyson Watts, an Army couple from Camp Humphreys, are still processing what they saw and what happened to them Oct. 29 in Itaewon, where a crowd surge took at least 158 lives.

The couple were caught up in the surge but survived the deadly night. They told their story to Stars and Stripes soon after the incident in Seoul’s nightlife district that changed their lives.

Staff. Sgt. Riley Watts, 33, an AH-64 Apache helicopter maintainer, and his wife, Allyson, 32, a former Apache avionics technician, are on their second tours in South Korea since 2010. They arrived at Camp Humphreys in July, this time as a married couple.

After seeing TikTok videos about Itaewon’s scene during Halloween, they decided to take part in the festivities, the couple said by phone on Nov. 1. Riley dressed as a Jedi from the movie “Star Wars”; Allyson dressed as a witch.

From Dragon Hill Lodge at Yongsan Garrison, they walked the short distance to Itaewon, the Seoul nightlife district teeming that Saturday night with thousands of young, costumed revelers. They mingled with other foreigners from England, Iran, the Netherlands and elsewhere.

The couple “just wanted to go check it out and have a good time” that night, Allyson Watts said.

“It’s not just about going out to drink,” Allyson Watts said. “It’s such a welcoming atmosphere with so many different cultures and food. It’s a very unique place and we always appreciate that about Itaewon.”

Within hours, the couple’s weekend in Itaewon became a frightening, real-life brush with death. The crowd, as large as 100,000, according to police officials, became densely packed. In one narrow, sloping alley, people surged into a suffocating mass from which escape for many became impossible.

At least 158 people were killed, and dozens remain injured from the crowd surge, according to the Central Disaster and Safety Countermeasure Headquarters. The victims include 26 foreigners, among them two American university students. U.S. Forces Korea said none of its 28,500 uniformed personnel or Defense Department employees were among the casualties.

Seoul police for four hours had fielded calls about the growing crowd size by around 10:25 p.m., when the Wattses were on the street lined with bars near the Itaewon subway station. The narrow alley adjacent to the Hamilton Hotel was becoming a deathtrap.

“Everybody acts like we were supposed to know that this was happening,” Riley Watts said. “Nobody knew.”

As the crowd grew and space on the sidewalk became scarce, the Wattses were surrounded by people who were unintentionally “pushing really hard,” the couple said.

The force of so many people together “would pick me up without me even trying to move,” Riley Watts said, and his feet left the ground.

“It was kind of like being in water; it was just pushing us down the road,” he said.

Amid panicked screams in the crowd, Riley Watts saw a girl fall, he said.

“I reached down to get her and she put her hand in mine, but when I tried to pull her up, she wouldn’t budge,” he said. “And she was on the ground and when the crowd surged, it pushed her down away from me and pushed me away from her.”

Riley said he does not know what became of the girl.

The couple soon realized that hunting for open space in the crowd was a dangerous task, according to Allyson Watts. As soon as open space materialized, people rushed so quickly into it that it became a “stumbling risk,” she said.

“If there was a sudden opening … then you risked falling over,” she said.

The Wattses eventually got off the sidewalk and onto the street because “it was the only place that was clear,” Allyson added.

“I would rather be in front of a car at that point rather than what we were up against,” Riley Watts said.

On the street, near the Hamilton Hotel, the Wattses took shelter next to a police vehicle. There, they saw emergency personnel wheeling droves of bodies in stretchers.

“We were like, ‘OK, that happened. There can’t be many more,” Riley Watts said. “And it just kept coming. They didn’t stop. It was just body after body.”

After making their way back to the hotel, the Wattses were up for hours trying to understand what had happened. They used a translator app on their phones to understand what Korean TV news was reporting about the incident. Riley said he saw himself on a TV news segment.

“We definitely didn’t go to sleep,” Allyson Watts said. “We were up for hours.”

Three weeks later, her husband still thinks about the girl he tried helping. He said he started seeing a counselor to discuss the incident.

“The key moments that I remember … just things that happened that were engraved in my mind,” he said by phone Monday. “I definitely needed a little help with.”

Meanwhile, his wife seeks answers to the harrowing night by following news reports on the incident.

“I keep watching the news articles and translating things to see what’s going to change,” she said. “I feel like I would like to see something come of what’s happened.” A man places a written tribute as a Buddhist monk prays at an alleyway where a crowd surge killed at least 158 people last month in Itaewon, South Korea, Nov. 17, 2022. (David Choi/Stars and Stripes)