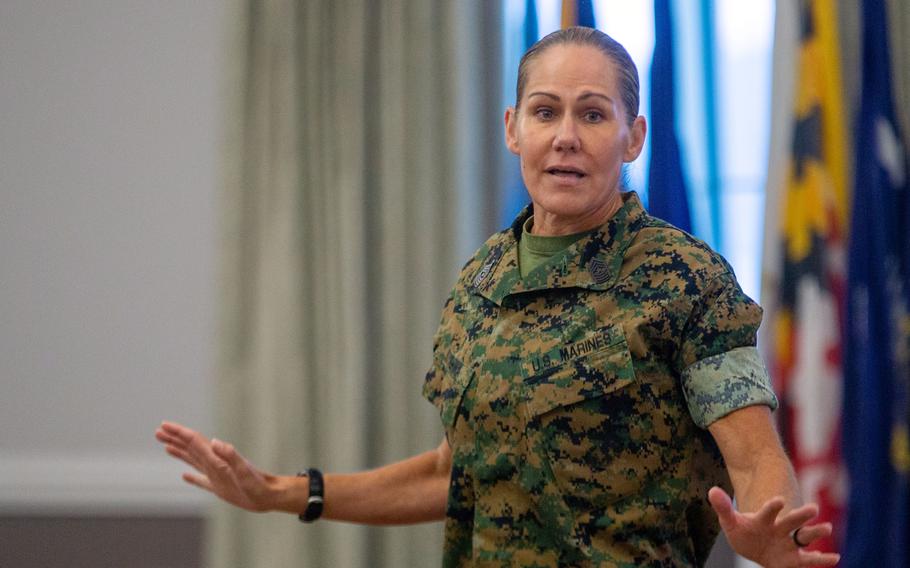 The next chief enlisted adviser to the commander of III Marine Expeditionary Force on Okinawa will write a page in Marine Corps history.

Sgt. Maj. Joy Kitashima will become the first female Marine to fill the senior enlisted role in a Marine expeditionary force when she takes up her new responsibilities next year at Camp Courtney, according to a spokesman for III MEF. “She will be the first ever female force-level sergeant major in the Marine Corps,” Capt. Brett Dornhege-Lazaroff told Stars and Stripes by phone Tuesday.

Kitashima, a native of Bloomington, Ill., is scheduled to succeed Sgt. Maj. Eric Cook at III MEF in July 2023, according to a Marine Corps message Nov. 22 from Commandant Gen. David Berger.

III MEF is a huge organization, a “force in readiness” in the Western Pacific, prepared for crisis response or combat operations, according to its website.

At full strength, it consists of 27,200 Marines and sailors at camps and air stations on Okinawa, on main-island Japan and on Hawaii, according to a III MEF informational booklet posted online.

“The Marine Expeditionary Force is the principal warfighting organization during larger crises or contingencies,” the booklet says. It would be “first to fight” in a conflict in the Indo-Pacific region.

Kitashima, who joined the Corps in May 1996 and trained as a military police officer at Fort McClellan, Ala., previously served as sergeant major for Marine Corps Installations Pacific, also headquartered on Okinawa at Camp Foster, according to her Marine Corps biography. She is currently sergeant major of the 2nd Marine Aircraft Wing at Marine Corps Air Station Cherry Point, N.C. In a Marine Corps video filmed in August 2020, while Kitashima was with MCIPAC, she talked about women’s equality in the Corps.

Kitashima earned a Legion of Merit award for her service with MCIPAC, according to the Marine Corps. The award recognizes “exceptionally meritorious conduct in the performance of outstanding services and achievement,” according to the Code of Federal Regulations.

Her record includes deployments to Afghanistan, Iraq and Haiti. Her other awards include the Meritorious Service Medal, and the Navy and Marine Corps Achievement Medal.