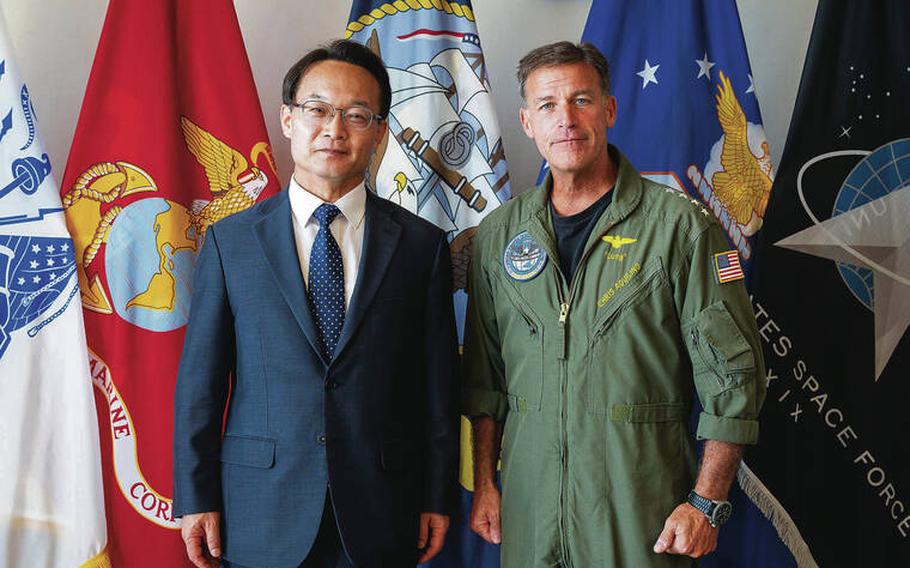 According to a Friday media release from South Korea's Honolulu Consulate, Cho Haejin arrived in Hawaii on Wednesday for a weeklong visit to discuss the Republic of Korea's newly minted Indo-Pacific strategy, North Korea's missile program and the upcoming anniversary of the arrival of Korean immigrants to Hawaii.

Tensions have run high on the Korean Peninsula amid a sharp increase in North Korean missile tests, some of which have flown over Japan. North Korea has launched more missiles this year than at any time during the rule of leader Kim Jong Un.

According to the news release, during a meeting with U.S. Indo-Pacific Command chief Adm. John Aquilino, the South Korean lawmaker discussed North Korean missiles and also "emphasized that the ROK government is willing to not only strengthen the ROK- U.S. alliance and the ROK- U.S.- Japan security cooperation, but also be ready to play more roles in maintaining the peace and stability of the Indo-Pacific region."

Last month the South Korean government released its new Indo-Pacific strategy, which asserts the ROK's role as a "global pivotal state" and calls for greater engagement with countries around the region with an emphasis on Southeast Asia and seeing its interests go as far west as Africa's Indian Ocean coastline.

South Korea has the world's 10th largest economy, but because it shares its only land border with its hostile northern neighbor it is dependent on ocean trading routes. In recent years, Seoul has prioritized building up the ROK Navy using South Korea's massive shipbuilding industry to build warships for itself and has also begun selling them to other countries around the region.

During this year's iteration of exercise Rim of the Pacific in Hawaii the ROK Navy sent its largest-ever participating force to the recurring naval war game. The Philippine Navy also debuted its newest warship, the South Korean-built guided-missile frigate BRP Antonio Luna.

The exercise took place amid a backdrop of simmering tensions as China has been locked in a series of disputes with its neighbors over territorial and navigation rights in the South China Sea, a critical waterway through which more than one third of all international trade travels. China considers the entire waterway to be its exclusive sovereign territory over the objections of neighboring countries, particularly the Philippines and Vietnam.

Escalating tensions between China and self-governing island Taiwan, which Beijing considers a rogue territory that it has vowed to put under its control, have raised fears of a conflict in the South China Sea — and the possibility it could disrupt trade and oil exploration in the region.

In a September interview Kim Jin Pyo, the speaker of the ROK National Assembly, told the Honolulu Star-Advertiser that "we have to ensure the free navigation of maritime paths in the Pacific Ocean, including the Taiwan Strait." But in discussing China, Kim was diplomatic, saying that when it comes to Seoul's relationship with Beijing, "I believe that there is not a major military issue between the two countries, " and stressed diplomacy in averting conflict.

Among South Korea's Pacific trading partners is Hawaii itself. According to data from the state Department of Business, Economic Development and Tourism, South Korea is Hawaii's No. 2 source of international imports and No. 6 international export market.

Cho met with Luke, who immigrated from Korea and will be Hawaii's first Korean American lieutenant governor. According to the consulate's media release, Cho congratulated Luke on her election and Hawaii's role in the alliance between the U.S. and South Korea. The two discussed North Korean missile threats, which have been a concern for Hawaii residents since a 2018 false alarm amid high tensions between the U.S. and North Korea.

They also discussed the upcoming 120th anniversary of Korean immigration to the islands. Hawaii was the first place Korean immigrants to the United States arrived and became a hub for the Korean independence movement. After the defeat of Imperial Japan during World War II, Korea gained independence and exiled independence activist turned Honolulu businessman Syngman Rhee became the ROK's controversial first president.