Among the 460 members of the training group are 164 midshipmen from the Republic of Korea naval academy sailing aboard the ROKS Hansando, a newly built training ship.

Joined by the combat support ship ROKS Daecheong, this is the first training cruise for the Hansando after commissioning last year.

Before arriving in Hawaii the training group made stops in Vietnam, Malaysia, India, Indonesia, Papua New Guinea, Australia, New Zealand and Fiji. The group's final port of call in its 110-day voyage will be in Guam before returning home to South Korea.

"It's a meaningful opportunity where our midshipmen can experience and have an opportunity to learn the Indo-Pacific strategy that the Korean government has put out recently," said Rear Adm. Kang Dong-goo, commander of the cruise training group.

South Korea has the world's 10th-largest economy and has become an increasingly visible player on the global stage. Earlier this month the South Korean government unveiled its new Indo-Pacific regional strategy, which asserts the ROK's role as a "global pivotal state" and called for greater engagement with countries around the region as far west as Africa's Indian Ocean coastline.

South Korean officials say that Hawaii itself plays a key role in that strategy. Kang said that exercises such as the biennial Rim of the Pacific and others demonstrate how Hawaii "functions as a connection" between the ROK navy and the United States.

This summer at RIMPAC, the Republic of Korea navy sent its largest-ever participating force to the recurring naval war game. About 1,000 sailors and marines trained on and around the islands, operating aboard the amphibious assault ship ROKS Marado, the destroyer ROKS Sejong the Great and submarine ROKS Shin Dol-seok.

The U.S. has looked to tighten ties with South Korea as its power and influence has grown. The training group's stop in Hawaii takes place amid a turbulent year of geopolitical conflict. The ongoing war in Ukraine has killed thousands and disrupted global food production, North Korea has launched more missiles this year than at any time in the reign of leader Kim Jong Un, and tensions have ratcheted up in the South China Sea as China fights with its neighbors over navigation rights in the critical ocean waterway and Taiwan increasingly asserts its status as an independent nation.

During a dinner at the Royal Hawaiian Hotel on Nov. 18 commemorating the alliance between South Korea and the United States, Adm. John Aquilino, commander of the U.S. Indo-Pacific Command, told assembled American, South Korean and Hawaii state officials that "the ROK-United States alliance has never been stronger, and that comes at a time in place that I continue to describe as probably the most dangerous times we've lived in since World War II."

Honolulu's South Korean Consul General Hong Seok-in said that this week's visit underscores the long connection between the U.S. and Korea, noting that it comes as the 120th anniversary of Korean immigration to the U.S. approaches. The first Korean immigrants arrived in Hawaii and the islands became a hub for the Korean independence movement. Honolulu entrepreneur Syngman Rhee became the ROK's controversial first president after the end of the country's occupation by Japan.

During the visit, members of the training group will participate in cultural events including a friendly soccer match with Koreans in Hawaii, visits to cultural sites and a reception hosted on the Hansando that will include a K-pop performance.

The Hansando, built by Hyundai Heavy Industries, is the Korean navy's first ship built specifically for training. It includes classrooms for midshipmen to participate in workshops and listen to lectures. Officers with the U.S. Pacific Fleet, including its commander Adm. Samuel Paparo, will give lectures to the Korean midshipmen.

"In our past cruise trainings, lectures held during our visits to various nations took place in spaces like hangars. This year, they will be held in our training ship ROKS Hansando's various lecture halls and facilities," said Cmdr. Park Jin-sung, Hansando's commanding officer. "On top of that … simulation rooms containing state-of-the-art training facilities and consoles, ROKS Hansando's participation in our cruise training this year not only amplifies its training and education capabilities for our midshipmen, but it also raises our navy's prestige all around the world."

Also aboard the ship is a showcase room with models and samples of weapons and equipment that have been produced by South Korea's growing defense industry that the crew has showed off to visitors at its various port stops.

"It's very important for (our allies) to learn about Korean defense companies, " said Kang, noting that the Korean government expects to play a larger role in the global arms market as its defense industry has grown. 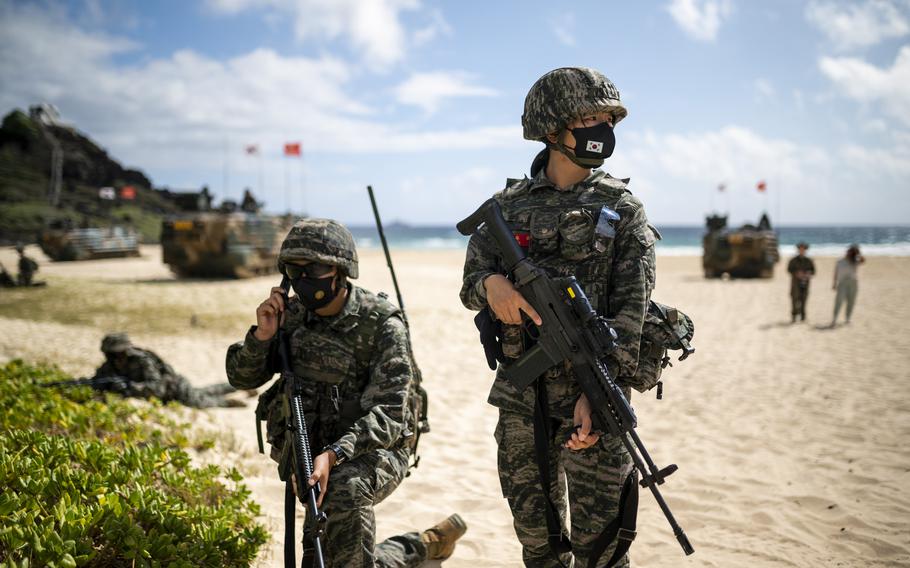 South Korean marines take part in an amphibious raid during a multinational Rim of the Pacific drill at Marine Corps Base Hawaii, July 30, 2022. (Devin Langer/U.S. Navy)