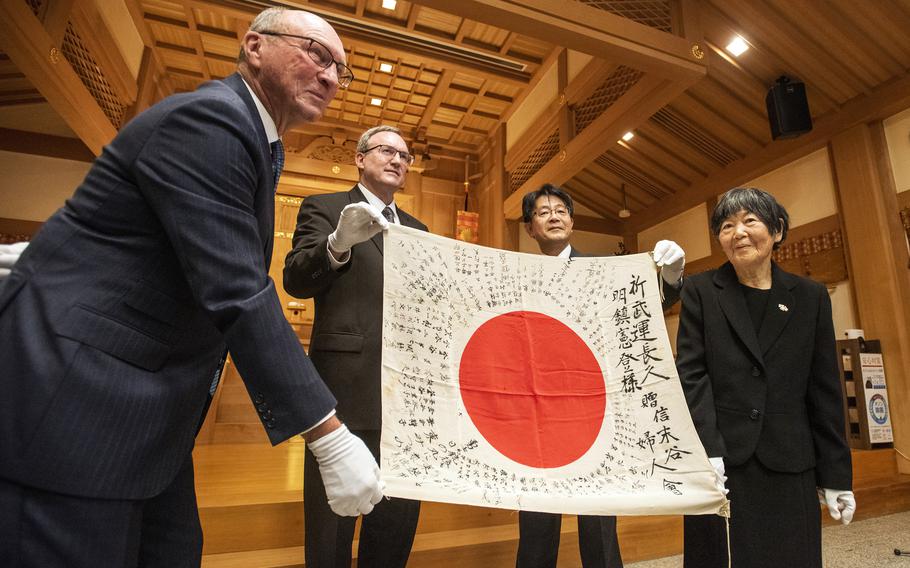 A U.S. Marine’s family returns a “good luck flag” to the family of a Japanese sailor during a ceremony Sunday, Dec. 4, 2022, at Gokoku-jinja, a shrine dedicated to the spirits of Hiroshima’s war dead. (Jonathan Snyder/Stars and Stripes)

HIROSHIMA, Japan – A U.S. Marine’s family returned a “good luck flag” Sunday to the family of a Japanese sailor who carried it with him in battle during World War II.

Richard Johnson, 79, and Chris Johnson, 54, the son and grandson, respectively, of the late Richard Wanlass Johnson, a Marine veteran of World War II, returned the flag, or yosegaki hinomaru, to the family of Norito Myochin. The return took place at the Gokoku-jinja, a Shinto shrine dedicated to the spirits of Hiroshima’s war dead.

The Obon Society, an Oregon-based nonprofit that helps U.S. veterans and their families return old war trophies like flags and swords, organized the ceremony.

Japanese troops often carried with them a small national flag signed in ink by their friends and family as a token of good luck. The flag was folded and carried securely beneath their clothing onto the battlefield, according to the society. 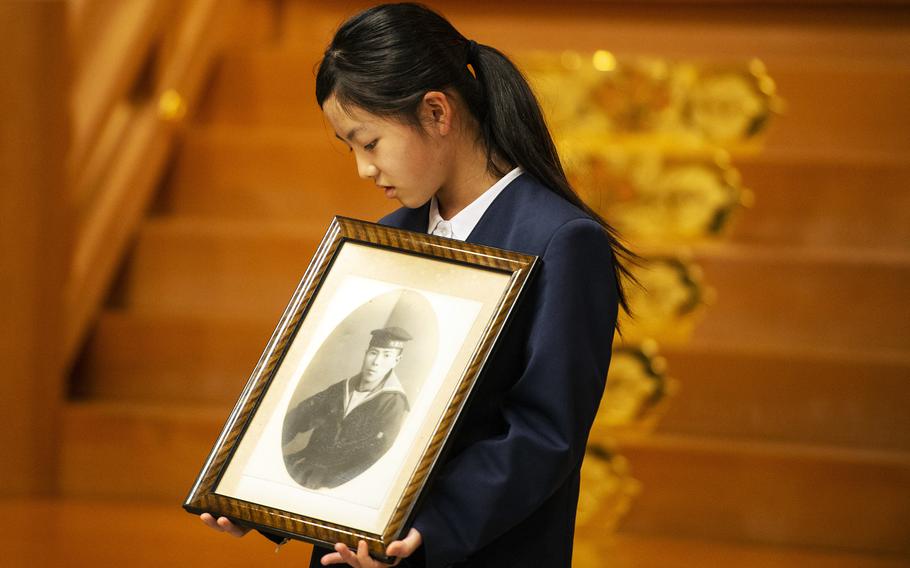 Akari Terahara, 11, holds a photo of her relative, Norito Myochin, during a flag-return ceremony at Gokoku Shrine in Hiroshima, Japan, Sunday, Dec. 4, 2022. (Jonathan Snyder/Stars and Stripes) Myochin died at the Battle of Peleliu, fought from September through November 1944 and marked by savage combat, according to the U.S. Naval History and Heritage Command. Nearly 11,000 Japanese troops were killed. U.S. casualties numbered 1,544 killed in action and 6,843 wounded in a fight many later considered unnecessary.

“Norito Myochin died when he was 22 years old in Peleliu,” Haruko Arimura, a member of the upper house of the National Diet, Japan’s parliament, said during the ceremony. “He was born on Sept. 21, 1923, and would have been 99 years old if he were still alive.”

Richard W. Johnson, of Lehi, Utah, served in the Marine Corps for 20 years and retired as a sergeant major. He joined the war in early 1943 and fought in New Guinea, Okinawa and Peleliu.

“When he came back from the war, I was about 2, 2 ½, and then he resumed his life and he never spoke of this flag,” the Marine’s son told Stars and Stripes on Friday. “Only once that I ever got him to talk about his wartime experiences was about a year before he was killed in an airplane crash.”

“When my father died, I inherited this flag and, frankly, another one,” he said.

He said the flag was kept in a drawer and taken out periodically by the Marine’s curious grandson, Chris Johnson.

“About two years ago Christopher asked if he could have the flag, which I was happy to give to him,” Richard Johnson said.

At the time Chris Johnson didn’t know how meaningful the flag is to the Myochin family.

“I found it fascinating, and I knew it was historically significant,” he told Stars and Stripes on Friday. “I didn’t know what to do with it, but I just asked if I could have it and I just had it in the storage until I found out about Obon Society.” Chris Johnson sent photos of the flag to the society and in April it discovered the flag belonged to Myochin and contacted his family.

Myochin volunteered to join the Japanese Imperial Navy, according to his nephew, Toshinari Myochin.

His family is happy to have something that stands in their memory for the missing sailor himself, his nephew said at the ceremony.

He said the family will offer it at a Buddhist altar.

“Hopefully this brings some closure to the family,” Chris Johnson said.