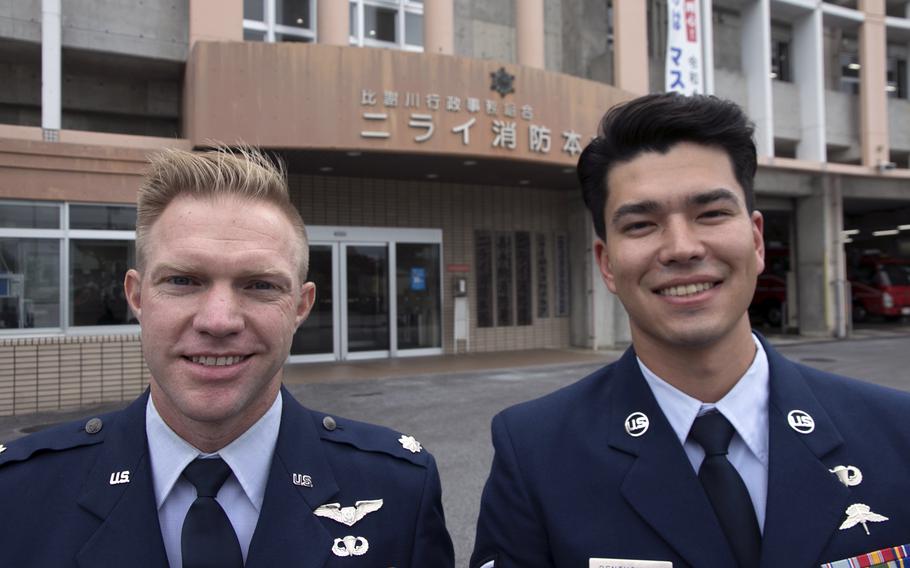 Air Force Lt. Col. Matthew Schlittler, 38, and Senior Airman Shane Pentkowski, 27, of the 31st Rescue Squadron at Kadena Air Base, Okinawa, received a certificate of appreciate from a local fire chief Thursday, Dec. 1, 2022, after their squadron rescued a fisherman who had fallen into the sea at Cape Zanpa. (Matthew M. Burke/Stars and Stripes)

A squadron of Air Force pararescuemen was recognized by a local fire chief Thursday for saving a fisherman who had fallen into the sea at Cape Zanpa, an Okinawa tourist attraction known for its lighthouse, towering jagged cliffs and heaving swells.

Lt. Col. Matthew Schlittler, 38, and Senior Airman Shane Pentkowski, 27, of the 31st Rescue Squadron at Kadena Air Base, received a certificate of appreciation from Nirai Fire Chief Keiichi Teruya during a morning ceremony at the Kadena city firehouse.

Schlittler, the squadron commander, and Pentkowski said a small rescue team was training in one of the unit’s 30-foot boats around noon Sept. 24 when they spotted the man, who is in his 30s, about 700 feet from the lighthouse. The fisherman was wearing a life vest and was uninjured in the incident.

“The man you rescued has family and this rescue means a lot for the family for the rest of their lives,” Teruya said during his remarks. “It is truly a wonderful thing.” Schlittler, who was not present for the rescue, accepted the award on behalf of the team, 18th Wing spokeswoman Senior Airman Anna Nolte told Stars and Stripes in an email Monday. Nolte declined to name rescuers other than Pentkowski or say how many there were for operational security reasons.

A friend of the fisherman had called the Yomitan firehouse at 11:20 a.m. and reported the fisherman had lost his balance and fallen into the water from a 10-foot cliff, a Nirai department spokesman said after Thursday’s ceremony. Some government officials in Japan speak to the media on condition of anonymity as a requirement of their employment.

The department dispatched a boat, two Jet Skis, ambulances and a command vehicle to search for the man, the spokesman said. The Japan Coast Guard and Okinawa police also responded.

About 30 minutes after the man had gone into the water, the pararescuemen, also known as PJs, spotted him from their boat, Pentkowski, a native of Burbank, Calif., recalled during a post-ceremony press conference.

“From far away, we saw someone in the water," he said.

The pararescuemen raced to intercept the man, who was headed out to sea, Pentkowski said. The waves were “pretty high,” so it was “crucial” to keep an eye on him, Yomitan firehouse chief Hiroto Arashiro added.

As they got closer, the pararescuemen could see the fisherman waving, Pentkowski said. They pulled up alongside and pulled him out of the water. They found him in good shape and gave him a blanket, the airman said.

Schlittler, of Colorado Springs, Colo., said he was proud his airmen saved a life that day.

“It’s why we do what we do,” he said. “Our mission is to save lives and as the commander of the squadron it makes me happy to see that the team is ready to do the job at any time.”

Editor’s note: A previous version of this story incorrectly stated that Lt. Col. Matthew Schlittler helped rescue the Okinawan fisherman. Schlittler accepted the certificate of appreciation on behalf of the 31st Rescue Squadron but wasn’t on the boat that day.