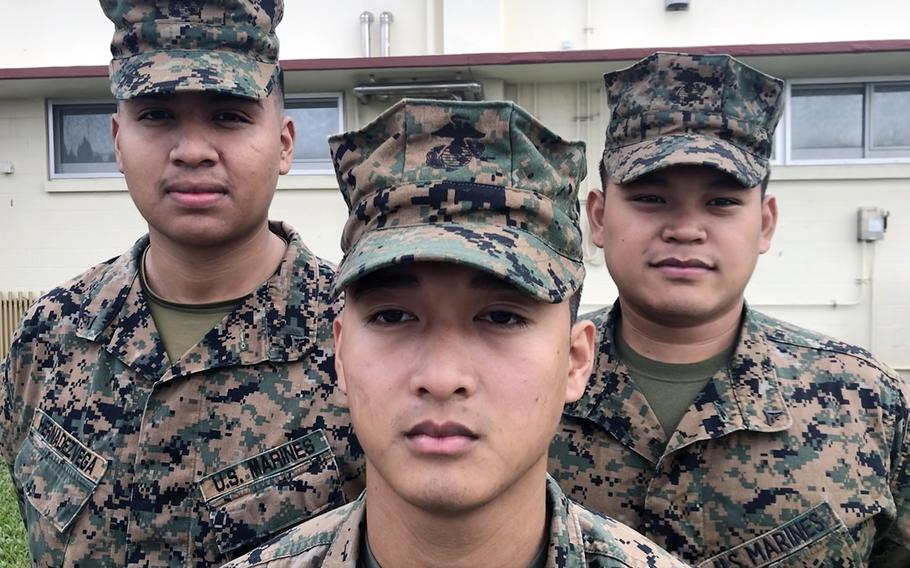 CAMP KINSER, Okinawa — Marine Lance Cpl. Vivencio Bio III remembered hearing a reassuring voice spurring him into a rip current on July 4 to save a woman being sucked out to sea at Blue Cave, a popular diving spot on Okinawa.

“I was very scared when I first got out there,” he said Thursday at the Combat Logistics Regiment 37 headquarters at Camp Kinser. “I could feel him protecting me, guiding me the whole time I was rescuing that woman. I could hear like a voice in my head saying, ‘Keep going, son. Don’t give up.’”

Bio was one of four Marines awarded a certificate of appreciation for the rescue by Ishikawa police chief Yasushi Oshiro on Oct. 27. He was also nominated by his command for a certificate of commendation, and the others for letters of appreciation, 3rd Marine Logistics Group spokesman Capt. Johnny Coronel told Stars and Stripes on Friday.

The Marines described working together to summon help while Bio pulled Marine Staff Sgt. Cody Shelton, 37, and his wife, Ririka Uehara, 26, of Okinawa city, from the water. Some of Okinawa’s beaches are notoriously hazardous and drowning in rip currents are a leading cause of accidental death on the island.

Blue Cave has its own reputation.

“There are many water accidents in this area; we put signs to warn people to be careful when swimming,” vice police chief Shingo Sunabe told Stars and Stripes at the station on Nov. 8. “I really appreciate them. They were brave, and thanks to them a life was saved.” 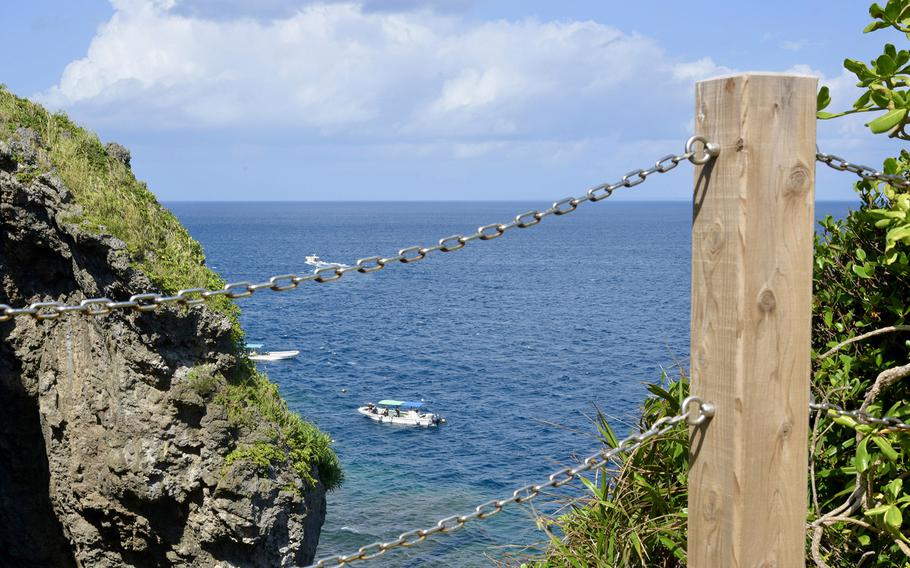 Blue Cave, a popular diving spot on Okinawa, is pictured on Oct. 27, 2022. (Frank Andrews/Stars and Stripes)

After an hour, they noticed Shelton and Uehara waving at them from about 1,000 feet offshore. The four soon realized the tide had come in quickly and the couple was in danger.

“Something was telling us this is not right,” Bio said.

Bio said he jumped in and swam out. Cambronero provided eyes from the shore. Hernandezvega called for help while Alcantara combed the crowd for any divers with equipment who might be able to assist.

Shelton, an Arkansas native who was assigned to Marine Air Control Squadron 4 at Marine Corps Air Station Futenma in Ginowan, pleaded with Bio to help save his wife.

Cambronero pulled Shelton, who wasn’t wearing a life vest, out of the water, Bio said.

“My body being so fatigued and exhausted … I could barely muster words loud enough or raise my arm high enough when I was attempting to signal the people I saw near the shoreline for help,” Shelton, now based at Camp Pendleton, Calif., told Stars and Stripes by email Friday. “I was fearful my spouse would be overwhelmed by the waves crashing down on her and drown.”

Bio continued after Uehara, who was wearing a vest, although the water was becoming rougher. Uehara was panicking, Bio said.

“The ma’am was swinging her arms,” he said. “She drowned me for like five seconds.”

Bio surfaced and calmed her down. Now they were another 200 feet from shore. Bio labored for 20 minutes to pull her to shore, he said.

“Fortunately, I was able to make it out of there,” Bio said. Shelton was pale and coughing up water, but Uehara was “perfectly fine” due to her life vest, he said.

Police and emergency medical crews arrived shortly after 2:10 p.m., Sunabe said. He said he had not seen a U.S. service member honored by the department for participating in a rescue since his arrival in April 2021.

Shelton said they are grateful to all four Marines but could never thank Bio enough.

The July Fourth weekend was a dangerous one on Okinawa due to a passing typhoon, Sunabe said. At the same time Bio was making his rescue, Army Maj. Robert Bourgeau was saving three people from a rip current at Mermaid’s Grotto, eight miles to the north. That incident claimed the life of Kazuki Takahashi, 60, creator of the popular Japanese manga series “Yu-Gi-Oh!”