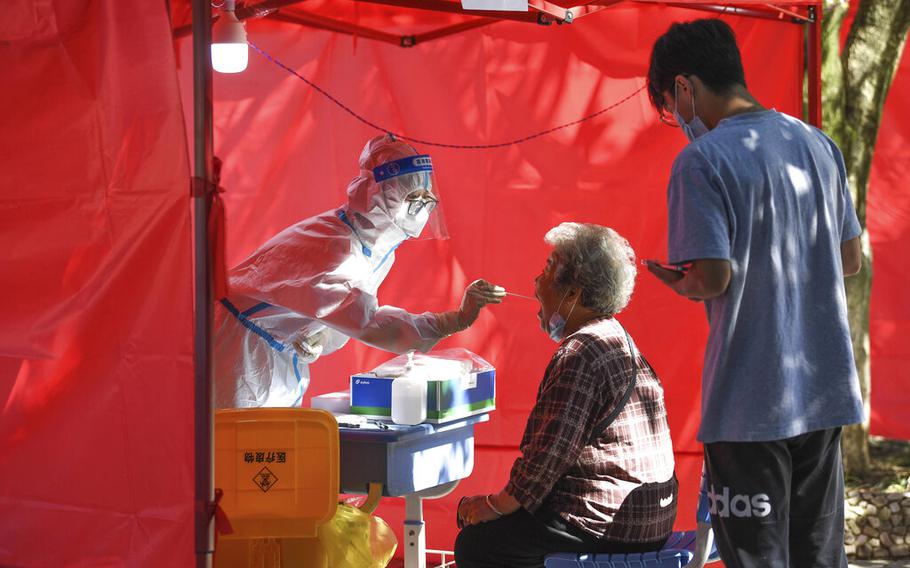 A medical worker takes a swab sample from a resident for nucleic acid test at a community testing site for COVID-19 in Yunyan District of Guiyang, southwest China’s Guizhou Province, Sept. 5, 2022. (Yang Wenbin/Xinhua)

A coronavirus outbreak on the verge of being China's biggest of the pandemic has exposed a critical flaw in Beijing's "zero covid" strategy: a vast population without natural immunity. After months with only occasional hot spots in the country, most of its 1.4 billion people have never been exposed to the virus.

Chinese authorities, who on Thursday reported a record 31,656 infections, are scrambling to protect the most vulnerable populations. They have launched a more aggressive vaccine drive to boost immunity, expanded hospital capacity and started to restrict the movement of at-risk groups. The elderly, who have an especially low vaccination rate, are a key target.

These efforts, which stop short of approving foreign vaccines, are an attempt to keep the virus from overwhelming a health-care system ill-prepared for a flood of very sick covid patients.

More intensive-care beds and better vaccination coverage "should have started 2 1/2 years ago, but the single-minded focus on containment meant fewer resources focused on this," said Yanzhong Huang, a senior fellow for global health at the Council on Foreign Relations.

Huang believes that even mRNA boosters, which have proved more effective at fighting disease from the latest omicron variants, wouldn't now resolve the fundamental problem with China's goal of eliminating infection rather than mitigating symptoms. To raise immunity by allowing a degree of community transmission "is still not acceptable in China," he said.

China's strategy of smothering outbreaks originally protected everyday life and the economy while preventing severe illness and death. But it has become increasingly costly as ever-stricter measures fail to keep up with more-transmissible variants.

Earlier this month, the government announced what on paper appeared to be the most significant easing of controls so far, with shorter quarantine times and fewer testing requirements. Officials insist that the 20-point "optimization" plan is not a prelude to accepting outbreaks.

But the effort to break cycles of disruptive lockdowns has had a rocky start. Some cities relaxed measures, while districts in others ordered residents not to set foot outside their homes. The result: confusion, fear and anger.

Confrontations have erupted in a few locations, most prominently at a huge Foxconn plant in central China that makes half the world's iPhones. The scene there turned violent this week as thousands of workers protested the company's failure to isolate people testing positive and to honor the terms of employment contracts.

Curbing outbreaks is again taking priority. Shijiazhuang, a city of 11 million about 185 miles from the capital, suspended its reduced requirements for mass testing on Monday and announced five days of citywide screening.

The first deaths to be reported since May - though only one or two per day - have intensified concerns that hospitals are poorly prepared to handle a surge in severe cases. Bloomberg Intelligence estimated that fully relaxing coronavirus controls could leave 5.8 million Chinese needing intensive care in a system with only four beds per 100,000 people.

At a news conference Wednesday, Chinese health officials said the 100-plus critical cases meant more hospital beds and treatment facilities were "very necessary" given the health risks for the elderly and individuals with preexisting conditions. The spread of infection was accelerating in multiple locations, they added, with some provinces facing their worst outbreaks in three years.

Major cities including Beijing, Guangzhou and Chongqing have ordered residents in certain neighborhoods to stay at home. Shopping malls, museums and schools have been closed once more. Major conference centers are being turned back into temporary quarantine centers, reflecting the approach adopted in Wuhan at the start of the pandemic. Some of the tightest restrictions are for nursing homes, with 571 such facilities in Beijing implementing the strictest tier of control measures and preventing all but essential exit and entry.

Opening to a world that's now mostly living with the virus would cause a wave of deaths, officials fear. China's vaccines initially were limited to adults ages 19 to 60, a policy that continues to have repercussions for vaccination rates today. Just 40 percent of Chinese older than 80 have received a booster shot, despite months of campaigning and gift-giving to encourage uptake. (Among people older than 60, two-thirds have gotten a booster.)

Since the beginning of the pandemic, China has relied solely on domestic vaccine makers. It approved nine locally developed options, more than any other country, with the earliest and most-used vaccines coming from state-owned Sinopharm and privately owned Sinovac. Both received approval from the World Health Organization early last year after being found to significantly reduce deaths and hospitalizations.

Sinopharm and Sinovac distributed their products widely throughout the world as part of a Chinese push to become a leading provider of global public goods and to improve China's image. Yet in late 2021, demand for Chinese vaccines started to dry up as Pfizer's and Moderna's production and distribution increased.

China has still not approved any foreign vaccines or explained its decision to shun what could be an effective way to plug its immunity gap. A visit by German Chancellor Olaf Scholz to Beijing in early November ended with an agreement for the Pfizer-BioNTech vaccine to be made available to foreigners living in China via the company's Chinese partner, Shanghai Fosun Pharmaceutical.

BioNTech has a development and distribution deal with Fosun that gives the Chinese company exclusive rights to supply the country. But Chinese regulators have repeatedly delayed signing off on the vaccine, despite it being made available in Hong Kong, Macao and Taiwan.

When asked last week if the government would approve BioNTech for public use, the director of the Chinese Center of Disease Prevention and Control said authorities were working on a new vaccination plan to be released soon.

Without access to the most effective mRNA-based candidates from Pfizer-BioNTech and Moderna, which have been updated to fight the omicron variant, the world's most populous country remains reliant on vaccines developed using the original strain of the virus.

Some health experts consider Beijing's reticence hard to justify. "China should approve the BioNTech and Moderna vaccines for the general Chinese population as soon as possible," said Jin Dong-yan, a virologist at the University of Hong Kong. "It's ridiculous that they only allowed foreigners in China to receive the BioNTech vaccine. It is as if they think Chinese people are inferior to foreigners."

China is instead trying to develop 10 of its own mRNA candidates. The one furthest along is from biotechnology group Abogen Biosciences and the state-run Academy of Military Medical Sciences. Indonesia approved it for emergency use in September, but it has not received the nod from Chinese regulators and may not get that until data is available from Phase 3 clinical trials in Indonesia and Mexico. The trials are expected to conclude in May.

Other options in China include an inhalable vaccine developed by CanSino, which has been available in Beijing, Shanghai and Hangzhou since October. A Chinese-developed antiviral drug, Azvudine, originally used for HIV patients, was approved to treat covid in July. Traditional Chinese medicines are widely used.

But new and more-effective vaccines remain a top priority, and the country's leading pharmaceutical companies are poised to mass-produce them. CanSino is completing a production facility in Shanghai that will be able to manufacture 100 million doses a year - after receiving approval.