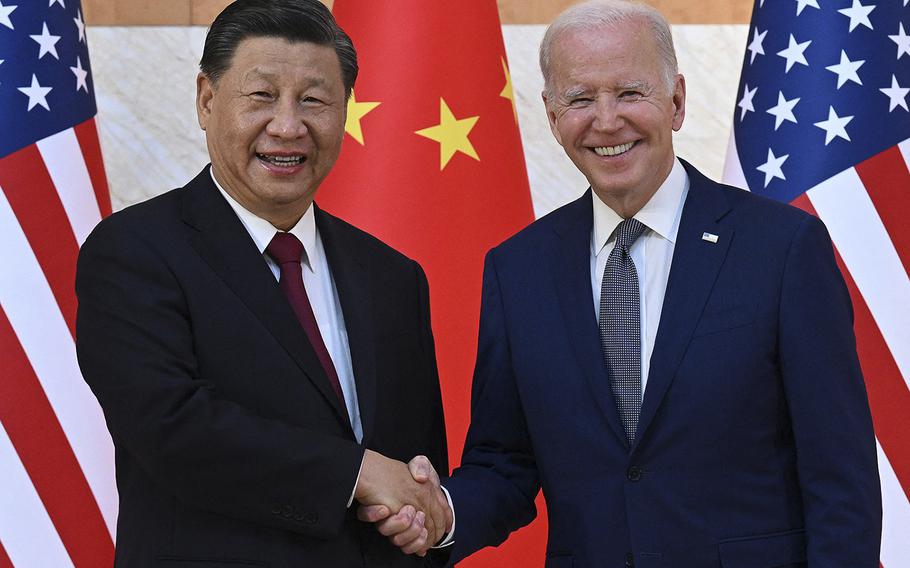 U.S. President Joe Biden, right, and China’s President Xi Jinping shake hands as they meet on the sidelines of the G-20 Summit in Nusa Dua on the Indonesian resort island of Bali on Nov. 14, 2022. (Saul Loeb/AFP via Getty Images/TNS)

(Tribune News Service) — Turns out Chinese President Xi Jinping’s partnership with Vladimir Putin has limits after all: He doesn’t want to follow the Russian leader into diplomatic isolation.

With speeches and gestures in recent weeks, Xi has taken his most significant steps to create space between Beijing and Moscow since Putin invaded Ukraine almost nine months ago. The latest signal came at the Group of 20 summit on the Indonesian resort island of Bali, where China signed off on a communique Wednesday saying that “most members strongly condemned the war in Ukraine.”

“The Russian president is almost alone in the world with his policy and has no strong alliance partner,” German Chancellor Olaf Scholz, who met Xi in Beijing earlier this month, told reporters in Bali on Wednesday. He noted the statement’s “astonishingly clear words.”

That show of solidarity followed a series of relatively warm meetings between Xi and world leaders who have led the campaign to punish Moscow, including his first sit-down with U.S. President Joe Biden on Monday. In those talks, Xi has reinforced his opposition to the use of nuclear weapons in Ukraine — a stance that outlines China’s red lines without abandoning Russia altogether.

The moves appeared to be part of a broader return to pragmatism since Xi set himself up to rule for life by breaking succession norms at a twice-a-decade party congress last month. China has also in the past week relaxed COVID-19 quarantine requirements and delivered a plan to rescue the battered property sector — telegraphing shifts in key policies blamed for battering financial markets and the economy.

“Finally getting all these meetings legitimately raises the prospect of whether this is a juncture after the congress where we will finally see that slight shift in tone,” said Andrew Gilholm, director of analysis for China and North Asia at Control Risks.

“Still I’d be very surprised if we saw a more fundamental change in policy,” he added. “And certainly I don’t think there’s any chance of sort of abandoning Russia and making major shifts.”

Xi is looking to reestablish himself on the world stage after avoiding overseas travel for the first 2 1/2 years of the pandemic — a period during which opinions of China deteriorated in most developed nations. During his meeting with Biden in Bali, Xi sought to cast himself as a grown-up in a world riven by divisions.

That doesn’t mean Xi is tearing up the “no limits” partnership he proclaimed with Putin weeks before the Russian leader launched the biggest conflict on the European continent since World War II. Beijing views Moscow as a valuable partner in challenging US power and still refuses to publicly condemn the war.

Foreign Minister Wang Yi was the only diplomat at the G-20 to officially meet with Russian counterpart, Sergei Lavrov, who was standing in for Putin. It was their 10th chat this year.

Wang said China would “continue to uphold an objective and fair position and play a constructive role” in promoting peace talks. Lavrov, in turn, said he was confident “the continuity of approaches toward our overarching partnership and strategic cooperation will be ensured.”

“China is trying to wear a ‘peaceful’ hat, but in reality there is not any significant criticism of Russia’s invasion of Ukraine, killing innocent civilians,” said Justyna Szczudlik, deputy head of research at the Polish Institute of International Affairs in Warsaw. “Anti-Western and anti-US glue sticks China and Russia very strongly.”

Still, China’s recent summitry indicates that repairing ties with some of Russia’s biggest critics is a priority — and that requires reassuring them that Xi’s isn’t allied with Putin. During the G-20, Xi met with Scholz and French President Emmanuel Macron, and he’s scheduled to sit down with Japanese Prime Minister Fumio Kishida on Thursday at the Asia-Pacific Economic Cooperation forum.

In a news conference on Wednesday, Macron called Xi’s commitment to the United Nations charter “sincere” and said he has “no doubt that there are limits to the partnership” with Russia.

“China has always firmly condemned the use of the nuclear weapon in any form, China has always put that limit,” Macron said. “And President Xi Jinping has always been clear on that, he is calling for peace and the end of the conflict.”

One Ukrainian diplomat in Beijing traced China’s efforts to distance itself from Russia to the Ukrainian counteroffensive that has reclaimed large swaths of territory since early September. That showed that the combination of Ukrainian troops and Western weapons were stronger than Russia and China realized, the diplomat said.

Putin told Xi during a meeting in Uzbekistan that month that he understood Beijing’s “questions and concerns” about the conflict, in a rare sign of strains between the two. As the Russian setbacks pile up, Kremlin officials including former President Dmitry Medvedev have warned about the possible use of tactical nuclear weapons in Ukraine.

Then, in the Scholz visit earlier this month, Xi warned against any use of atomic weapons. A US statement after the Biden meeting, which China didn’t dispute, said both leaders expressed opposition to Russia’s loose talk of using nuclear weapons in Ukraine.

“There is a clear desire by Beijing to show that they want to move the US relationship to a more stable basis,” said Raffaello Pantucci, a senior fellow at the S. Rajaratnam School of International Studies at Nanyang Technological University in Singapore. “All of this is signaling to the West, rather particularly than a sign of distancing from Putin. More a clarification and signal that they want to find a stable way forwards.”