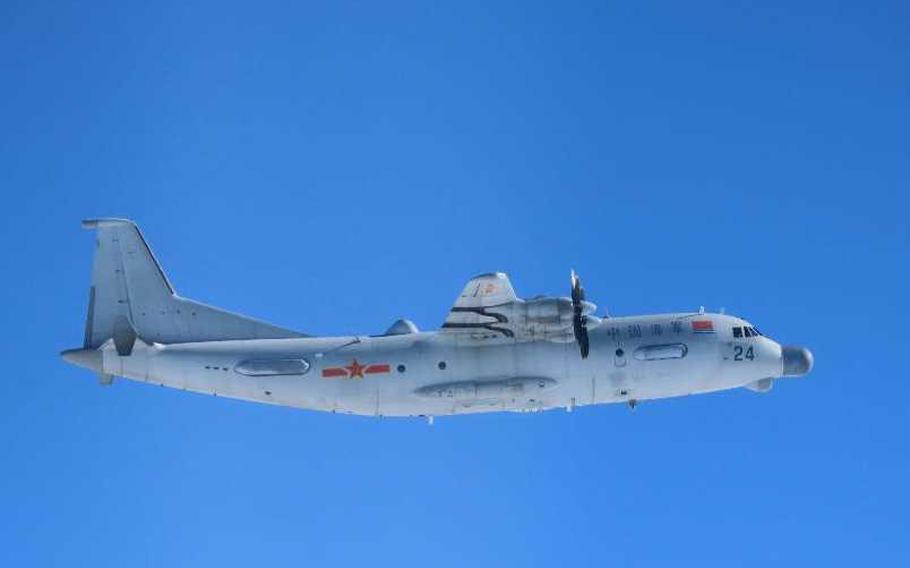 The Japan Air Self-Defense Force intercepted a BZK-005 high-altitude reconnaissance drone, a Y-9 intelligence-gathering aircraft and a Y-9 patrol aircraft that flew between Okinawa and Miyako Island, 175 miles to the southwest, a spokesman for the Joint Staff told Stars and Stripes on Tuesday. Miyako is part of Okinawa prefecture.

The spokesman declined to provide details of the Self-Defense Force response, including how many and what type aircraft responded, what time the incidents occurred or what action the aircraft took in the air. None of the Chinese aircraft entered Japanese air space, he said.

However, these aircraft turned north after passing through the Miyako Strait from the East China Sea, then continued to an area off the east coast of Okinawa, where the Y-9s flew a box pattern. All three aircraft returned by the same route, according to a map accompanying the Joint Staff news release Tuesday.

Japanese authorities cannot be certain, but the Chinese aircraft may have been “gathering information” on the Keen Sword 23 exercise underway across Japan, including the area surrounding Okinawa and the Ryuku, also called the Nansei, islands, the Joint Staff spokesman said.

“We will carefully observe China’s military move, continue our surveillance activities and take all possible measures to act against any air space violation,” he said.

Keen Sword is a series of field training exercises by the Japan Self-Defense Forces and U.S. Navy, Marine Corps, Army, Air Force and Space Force. A regular event since 1986, the exercises increase combat readiness and hone the allied forces’ ability to work together, according to a U.S. Forces Japan news release on Thursday.

Japan committed F-35A and B model stealth fighters to the exercise this year, according to another Joint Staff spokesman Friday.

Keen Sword exercises this year are taking place around Yonaguni, Japan’s westernmost island, about 150 miles west of Miyako and less than 100 miles east of Taiwan.