China moved another step closer to completing its own space station with the launch of a rocket carrying the third and final module for the ambitious project.

The Long March 5B rocket blasted off from Wenchang Satellite Launch Center on Hainan island at 3:37 p.m. local time Monday with the Mengtian laboratory module on board. The module, whose name translates to dreaming of the heavens, will join the Tianhe core module and the Wentian experiment module to complete the T-shaped Tiangong space station.

China started building its own space station in April 2021 after the U.S. barred Beijing from participating in the International Space Station. In May, it released a high-definition image of Tiangong, which is in orbit around 250 miles above the Earth and expected to be finished later this year.

Once Tiangong is complete, China will be the only country to operate a space station of its own, adding to other accomplishments such as landing on Mars last year and on the far side of the moon in 2019.

Under President Xi Jinping, Asia's biggest economy has increased efforts to match the U.S. as the dominant power in space, teaming up with Russia on a proposed lunar research station and opposing the Washington-backed Artemis Accords, which are intended to help govern future space activity such as mining on the moon.

China's Global Times said in September that the Mengtian module will be oriented to microgravity scientific research and is equipped with experimental cabinets for fluid physics, materials science, combustion science, basic physics and space technology experiments.

Zhang Wei, director of the Space Utilization Development Center, Technology and Engineering Center for Space Utilization, under the Chinese Academy of Sciences, said previously Mengtian will carry the world's first space-based cold atomic clock system. Cold atomic clocks may one day "form the most precise time and frequency system in space, which should not lose one second in hundreds of millions of years," Zhang was quoted as saying.

The Mengtian module, almost 18 meters long, also has a payload airlock, allowing the station's small robotic arm to take science payloads and install them on an experiment platform on the module's exterior, according to Space.com.

Monday's launch may draw criticism if stages of the Long March 5B rocket crash back to Earth in an uncontrolled re-entry — something that happened after China's previous two space station launches.

In late July, remnants of a massive Chinese rocket fell over the Indian Ocean, leading U.S. space officials to criticize China's lack of information-sharing about its boosters re-entering the atmosphere.

China's spaceflight agency said at the time that the vast majority of the wreckage burned up upon re-entry but some experts estimate about 20% to 40% by weight of the part of the rocket survived, and chunks have begun turning up in Indonesia and Malaysia. 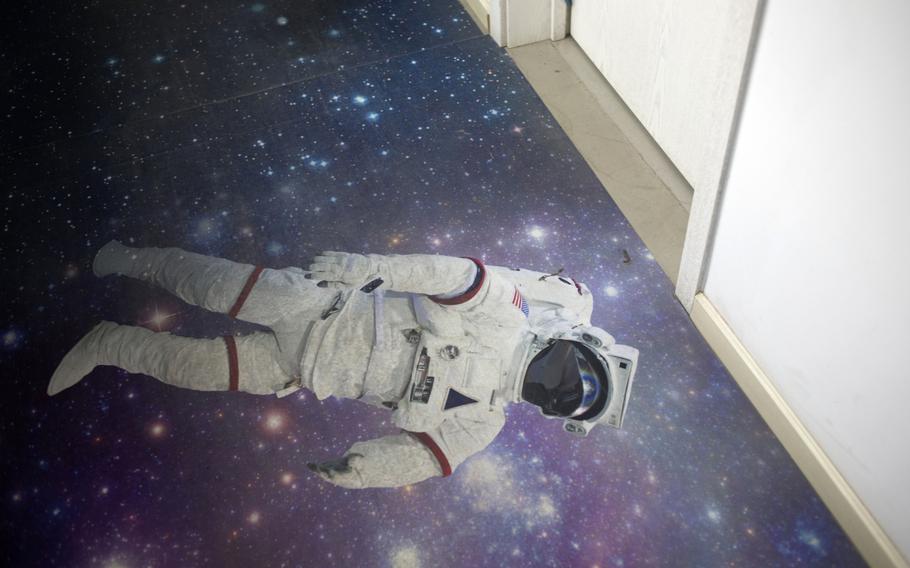 Flooring featuring an image of an astronaut is seen inside a corridor of a building at the Chinese Academy of Sciences in Beijing on Nov. 14, 2018. (Giulia Marchi/Bloomberg)