Taiwan, missiles and spying set to be China's priorities under new Xi term 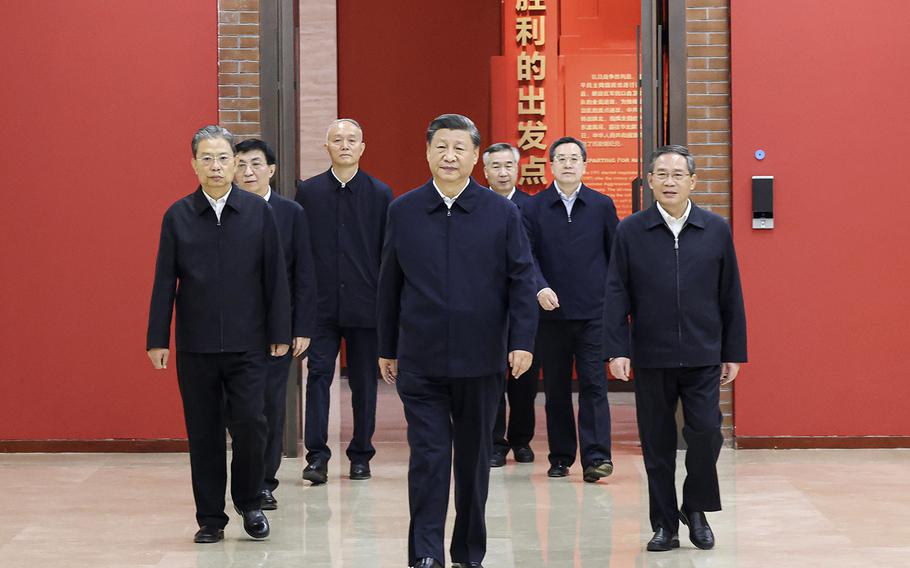 Fresh from securing another term - if not life tenure - as China's paramount leader, Xi Jinping on Thursday led a symbolic field trip of his newly appointed top lieutenants to the historical revolutionary base of Yan'an, the cradle of Mao Zedong's Communist Party takeover of the nation.

Standing in the cave from which Mao led his Red Army troops, China's most powerful leader in decades delivered a warning about the need for loyalty, hard work and sacrifice. The party must carry forward the Yan'an spirit, Xi told the assembled leaders, which he described as primarily one of "pioneering self-reliance and arduous struggle."

According to Xi, that wartime ethos is needed today as much as in the 1940s, when the Communists fought first the Japanese invasion and then a civil war with the ruling Nationalist Party.

The nature of the battle for which Xi is preparing can be divined from the backgrounds of the country's two dozen most senior leaders, selected at the twice-a-decade political meeting that just concluded. His choices reflect a focus on developing advanced military and technological capabilities so that Beijing can withstand any pressure from the United States and its allies, particularly when it comes to enforcing territorial claims over Taiwan, the self-governing island democracy of 23 million.

"Xi is emphasizing that he succeeds the tradition of Mao," said Guoguang Wu, a senior research scholar at the Stanford Center on China's Economy and Institutions. "Under his leadership, just like under Mao's leadership in the 1940s, the party will be able to gain whatever they would like to."

Despite China's growing global clout, Xi still worries that slowing growth and deep links with Western industrialized economies will weaken the party's hold on power, said Wu, who worked as an adviser to reformist Chinese leader Zhao Ziyang in the 1980s until he was deposed during the 1989 Tiananmen protests. "Xi has huge ambition. In his own words, he would like to bring China back to the center of the world stage. For that purpose, China is not strong enough."

During the meeting, Xi underscored the severe challenges facing China. He elevated security concerns alongside economic concerns and he called for the country to be "united in struggle" to overcome hardships.

The meeting cemented Xi's role in setting the policy agenda. His former rivals, Li Keqiang and a one-time would-be successor, were both pushed out, indicating that alternative political networks had been erased. And most of the 13 individuals promoted to join the 24-member Politburo not only have strong personal ties to Xi but technical expertise or experience relevant to his policy priorities of advanced technologies, security and military power.

Yuan, the current Zhejiang party boss who studied aerospace in Germany, led a program that in 2003 sent the first Chinese astronaut into space. Liu majored in the design and manufacturing of fuses for artillery systems at East China University of Science and Technology and later worked in one of China's earliest bomb and missile factories before switching to a political career.

The promotions reflect Xi's "focus on scientific and technological expertise as a critical input for China to innovate itself out of the middle-income trap and out of Western chokeholds on core technologies," said Neil Thomas, senior China analyst at the Eurasia Group.

Xi talks often about how officials must re-create the hard-won breakthroughs in satellite and nuclear weapon technologies from the early days of the People's Republic, which were essential to keeping China from being pushed around by other nuclear-armed nations.

The other major issue that looms over the Politburo appointments is Taiwan, with 15 of the two dozen members having some kind of links to the island, either through managing cross-straits business ties - the carrots of Beijing's effort to compel unification - or as part of the army that may one day be charged with bringing it back into the fold should it ever formally declare independence.

Cai Qi, one of the more surprising additions to the elite seven-member Politburo Standing Committee, visited Taiwan in 2012 when he was working under Xi as a local official in Zhejiang and called for China to engage and shift political allegiances in the independence-leaning south of the island.

Cai, whose work with Xi across two provinces helped him skip stages of promotion to become Beijing party boss in 2017, wrote positively about meeting with an elderly relative, encouraging Taiwanese investment in China and getting along well with politicians from the more China-friendly Kuomintang party that ruled Taiwan at the time.

Much of this experience with Taiwan could merely reflect Xi's own career path: He spent many years in Fujian and Zhejiang, two coastal provinces with deep business ties to Taiwan. An exception, however, is He Weidong, leader of the Taiwan-focused Eastern Theater Command. The 65-year-old general's rise from not even being a member of the 370-odd Central Committee to a seat on the Politburo represents the more menacing side of Xi's Taiwan agenda.

Shen Ming-Shih, the director of national security research at the Institute for National Defense and Security Research, a think tank in Taiwan, said the personnel changes appear to show that Xi is "losing patience" over Taiwan and is pushing a "tough Taiwan strategy that does not care about the deterioration of cross-strait relations."

The decision to retain Zhang Youxia, 72, despite an informal age limit of 68, is probably driven by Xi's desire for combat experience at the top of the PLA. Zhang, the oldest Politburo member, fought in China's 1979 war with Vietnam.

Another norm-breaking decision was to make Chen Wenqing, China's current spy master, a Politburo member for the first time since the Ministry of State Security was created in the 1980s. Chen became the youngest deputy secretary in the corruption watchdog that Xi used to purge graft and rivals.

The promotion indicates that "the spies have come to power" in Xi's China, much like the KGB in the Soviet Union, said Wu, the Stanford scholar. "Now it seems that Xi Jinping really wants to use the system to control not only social forces, but also to play a role in the surveillance of the political elite and in foreign relations," he said.

Hung Yao-nan, a China studies scholar at Tamkang University in Taiwan, said that Xi's emphasis on security reflects a dilemma of his highly centralized rule. Hung calls it the "Mao Zedong trap," whereby Xi will either need to make internal control ever more stringent, like Stalin, or pursue rampant nationalism and aggression.

"With Xi Jinping at the center of an ever smaller decision-making circle, it is becoming easier to make the bad decisions," he said. In his speeches, Xi often warns that the whole world must fight against divisions and entering a "new Cold War" but, to preserve personal control, "he has built the wall by himself," Hung said.

The Washington Post's Lyric Li in Seoul, Theodora Yu in Hong Kong and Vic Chiang in Taipei contributed to this report.