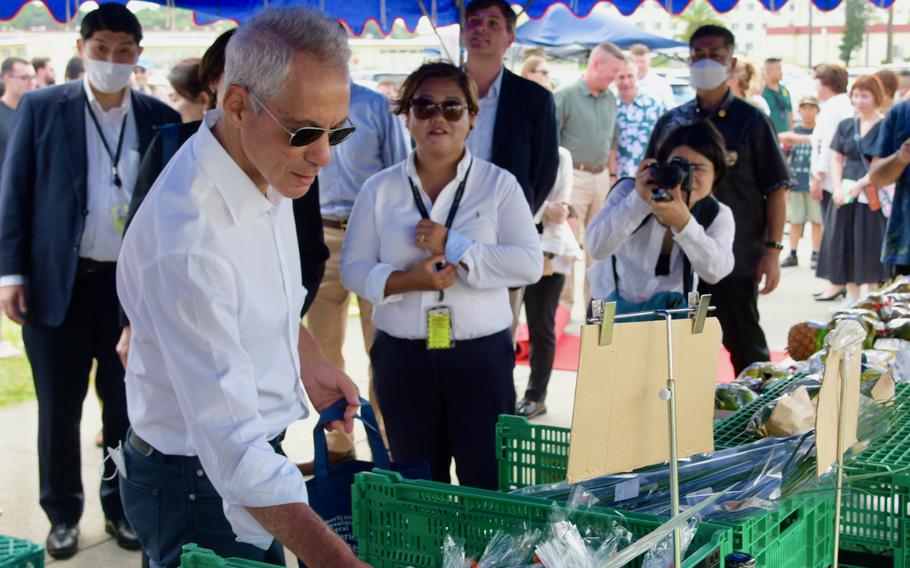 U.S. Ambassador to Japan Rahm Emanuel looks over vegetables at the farmers market at Camp Hansen, Okinawa, on Oct. 31, 2022. (Frank Andrews/Stars and Stripes)

CAMP HANSEN, Okinawa — The U.S. ambassador to Japan kicked off an era of produce diplomacy at a farmers market that welcomed local growers onto this Marine Corps base Sunday.

More than a dozen Okinawan vendors brought a variety of products to sell, from artisanal bagels to locally grown bananas. The gates were open for Japanese customers who mingled with the U.S. military population over fresh fruits and vegetables.

“It’s a great time for families to come together,” Ambassador Rahm Emanuel said during a press conference at the market. “You create a real community between the military and members of the neighborhood.”

Emanuel said the idea for famers markets on U.S. bases in Japan came to him in April while dining with service members at Camp Hansen. He passed the idea to the base commander, Marine Corps Installations Pacific and the U.S. Consul General in Naha.

In a statement posted on the embassy website, Emanuel said he’s seen as the mayor of Chicago and a U.S. congressman how farmers markets bring communities together.

“I fully expect this market to foster a similar benefit between the people of Okinawa and the American men and women who are contributing to the defense of Japan,” according to the statement. “To me, this is the very definition of ‘win-win-win,’ and I look forward to establishing more farmers markets at other U.S. bases across Japan.”

The market collaboration is a first on an island known as much for its anti-military protests as for its large U.S. military presence.

Emi and Genki Nakada, owners of “a bagel” sandwich and coffee shop in Kin Town, said they were pleasantly surprised by the turnout. They sold all 60 fresh bagels they brought to the market in the first 2 ½ hours, they said.

“It’s nice,” Emi Nakada, 35, said. “We see a lot of people are communicating with each other. People are smiling. It’s a good atmosphere.”

Airman Jared De La Garza, 20, from the 44th Air Maintenance Unit at Kadena Air Base, nodded with satisfaction as he sampled a strawberry smoothie.

“I think it’s sweet because we actually get to talk to each other, interact with each other,” the Del Rio, Texas-native said.

Emanuel filled a bag with vegetables and left around 1:40 p.m. after an hourlong stay. He posed for photos and chatted with vendors and American and Japanese customers. He left a voicemail message by cellphone for Marine Pfc. Isaiah Innocent’s mother on Long Island, N.Y.

Onna village Mayor Yoshimi Nagahama said he saw the benefit to the market.

“I think that it is very important because local farmers had the chance to sell and promote their products,” Nagahama told Stars and Stripes by phone on Monday. “We want to work together with Kin town, Ginoza village and Camp Hansen to build a safe and peaceful area. This kind of interaction is very important.”

Stars and Stripes reporters Frank Andrews and Keishi Koja contributed to this report.