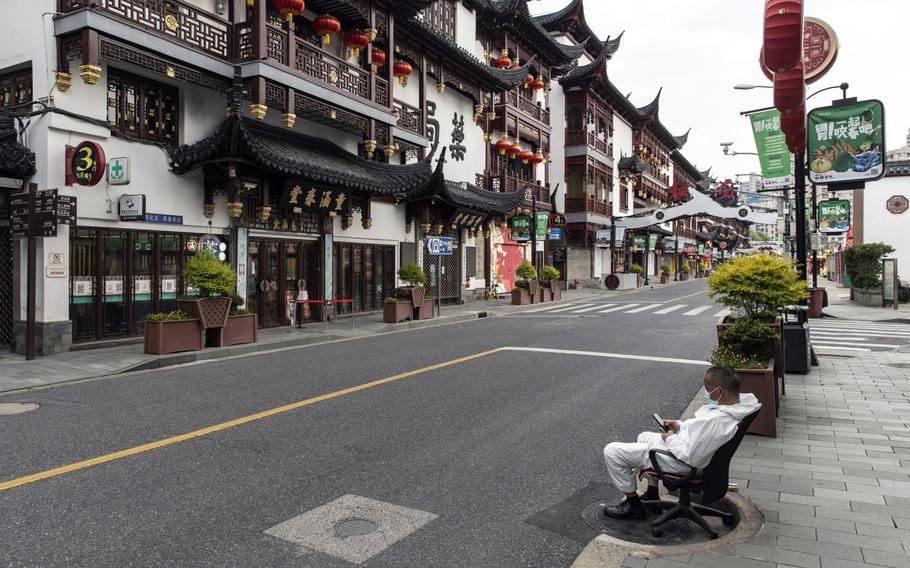 A worker sits along a near-empty road during a lockdown due to COVID-19 in Shanghai on May 16, 2022. (Bloomberg)

BEIJING — Frantic appeals for food and medical care are spreading across China in a grim deja vu, as tens of millions of people are put under weeks-long coronavirus lockdowns ahead of a key meeting of the ruling Communist Party.

While much of the world is moving past the pandemic, China remains stuck, with leader Xi Jinping continuing orders to maintain "zero COVID." These lockdowns are keeping localized outbreaks from spreading, but are taking an enormous economic and psychological toll on the population.

Xi is set to begin a third five-year term next month, breaking the precedent of stepping down after two terms. Lockdowns are expected to continue at least through that meeting, the 20th National Chinese Communist Party Congress.

Vice Premier Sun Chunlan said on Friday that some sweeping covid controls should be narrowed, without giving a time frame, but she also emphasized the importance of preventing large-scale outbreaks ahead of the congress, according to the state-run Xinhua News Agency.

Some of the worst reports are coming out of Ili prefecture in China's northwestern Xinjiang region, where a lockdown began early last month.

"We've been locked up in our home for more than 40 days. We are short of everything, especially food," said Gulnazar, an Ili resident, who only gave her given name because of security concerns. "There are so many difficulties, I feel like crying just by mentioning them."

Gulnazar said local authorities locked their apartment door from the outside, and only opened it when medical workers came to do coronavirus tests.

In some cities, neighborhood committees have delivered free groceries to those in lockdown. But Gulnazar said their neighborhood committee has only been offering to sell them food at higher-than-normal prices, and they didn't do so often. The last time they came to Gulnazar's door was 11 days ago, she said.

"We only eat naan and congee," she said, referring to flatbread and porridge. "There is no milk or vegetables."

Others in Ili posted online about being unable to take sick children to the hospital, and even the deaths of family members in lockdown. The reports were widely circulated on Chinese social media, but could not be immediately verified by The Washington Post.

The Ili government apologized on Friday for problems in the lockdown response, but also rejected some reports as rumors, including one of an old man killing himself. Ili police announced Sunday that four people had been punished with five to 10 days' detention each for "spreading rumors" about the lockdown, and warned residents to watch their words.

China's official case count remains minuscule, with only 949 locally transmitted cases reported nationwide on Sunday, in a population of 1.4 billion.

The economic hardship of the lockdowns has drawn widespread complaint from residents who are unable to work and are surviving on dwindling savings. The public dissatisfaction is a challenge for Xi, who has sought to project an image as a populist leader, and declared poverty elimination a central goal of his administration.

In southwestern Guiyang, which began a lockdown in parts of the city Sept. 5, residents reported online on Monday that they were struggling to secure food. "All supermarkets and small stores where you can buy groceries are closed," one wrote on Weibo. "The online shopping platforms designated by the government are also having shortages and you cannot buy stuff or receive deliveries."

A Guizhou wildlife park put out a public plea last week for food to keep its tigers, pandas and other wild animals fed.

Tibet's capital Lhasa began locking down parts of the city early last month. In one post that was widely shared on Weibo, someone in Tibet claimed to have been unable to bathe for 12 days in a quarantine center.

These scenes are reminiscent of Shanghai's two-month lockdown this year, which plunged residents of one of China's wealthiest cities into a struggle for survival. With supply chains broken down, residents made urgent pleas for food, and begged for sick family members to be allowed out of lockdown to go to hospitals.

The Shanghai government acknowledged several people died because of medical emergencies in the lockdown.

China's pandemic response drew praise in some quarters, with the lockdowns saving lives at a time when there were no vaccines. But as effective vaccines have been rolled out, and the virus has emerged in more-infectious but less-deadly variants, criticism of China's "zero COVID" approach has mounted.

State media have steadfastly praised the policy, saying it shows China's government is not willing to accept mass COVID deaths like Western democracies have done.

Beijing's leaders say they want to ease their way back to normal, but so far, it's unclear when and how this will happen. The government has eased some of its controls this year, such as shortening quarantine for those entering the country to a week, and making it easier to travel between provinces.

But cities suffering outbreaks have snapped back into lockdown, with municipal officials often fired or punished afterward.

Beijing has maintained the country cannot stop the lockdowns because a substantial portion of the population, especially the elderly, is still unvaccinated. China has also refused to import the most effective foreign vaccines for coronavirus, relying on domestic ones that provide less immunity.

The government has suppressed much of the domestic criticism of the "zero COVID" policy, including through censorship and detentions.

Even in Chinese cities without outbreaks, pandemic controls disrupt daily life. In cities like Beijing, residents must obtain a negative coronavirus test result every three days to be able to enter office buildings, restaurants and other public spaces.