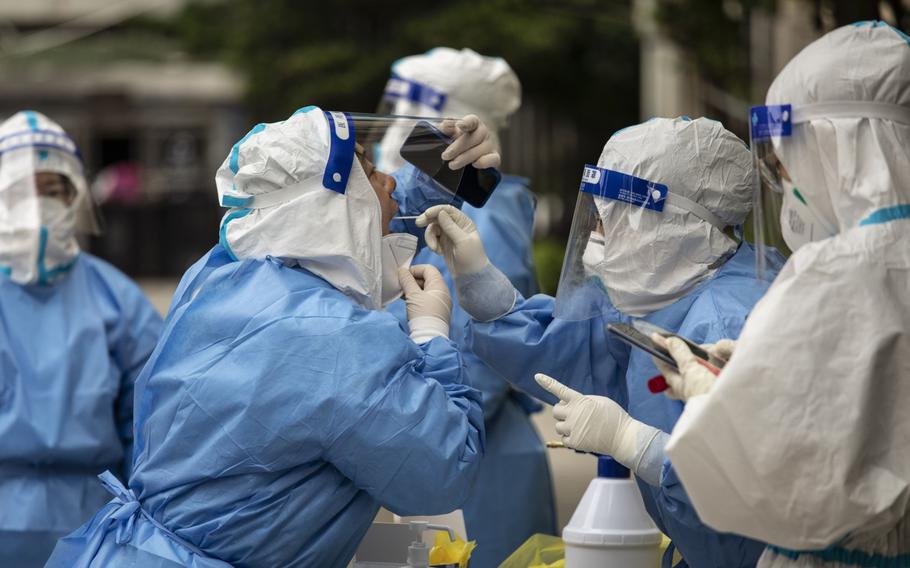 A team of health workers and volunteers in personal protective equipment (PPE) test each other before testing residents at a neighbourhood where a suspected flare up in COVID-19 cases occurred in Shanghai on May 9, 2022. (Qilai Shen/Bloomberg)

China is enforcing lockdown restrictions in areas around Beijing more intensively and will mass-test the nearby port city of Tianjin, stepping up its quest to wipe out COVID-19 ahead of a key meeting of the Communist Party's top leaders.

The moves come even as China's latest wave shows signs of easing, with 1,556 new infections nationwide reported for Sunday, down from more than 3,000 less than two weeks ago. Despite the high cost to the Chinese economy, the country remains focused on eliminating transmission of a virus that most of the world has now accepted as endemic.

Shijiazhuang, the capital of Hebei province bordering Beijing, confined residents of four major downtown districts to their homes for three days from Sunday afternoon, saying a mass testing exercise will be undertaken. The city of some 11 million also suspended subway services and halted nonessential business operations in the locked-down districts. The province, home to many workers who commute to the Chinese capital, reported 45 COVID cases for Sunday.

The partial lockdown of Shijiazhuang follows the imposition of restrictions elsewhere in Hebei last week. Zhuozhou city bordering Beijing has been in lockdown since Tuesday, while Xianghe county issued a stay-at-home order for its 384,000 residents from Friday after finding just one unconfirmed case, going beyond the guidelines stipulated in China's recently reviewed COVID playbook.

Hebei's response suggests a higher level of sensitivity around the capital as Beijing prepares to host the party congress, a once-in-five-years meeting where President Xi Jinping is due to secure a precedent-breaking third term in office. Xi has made China's COVID Zero policy a key tenet of his rule, saying the nation has avoided the massive death tolls of places such as the United States, despite the disruption caused.

Still, concern about the restrictions in Shijiazhuang are growing on Chinese social media, where several users posted information saying that the city will use patrol officers and drones to ensure people are abiding by the lockdown orders and that those who don't will be detained.

An outbreak in Tianjin, some 30 minutes by high-speed train from Beijing, saw authorities order a city-wide mass test, according to state television. The port hub had reported 31 local COVID cases for Sunday. Beijing itself reported one infection.

China is holding fast to COVID Zero, even as more-infectious variants require increasingly stringent restrictions that are upending growth and business activity. Lockdowns and other curbs are hitting the world's second-largest economy, with economists downgrading their growth estimates for 2022 to 3.5% because of the COVID and property market turmoil. Profits at industrial firms in China fell in the first seven months of the year, data on Saturday showed.

Still, Xi and senior leaders appear wedded to the strategy, which involves locking down after even a few cases to stifle spread, frequent mass testing and mandatory isolation of everyone infected and their close contacts. Border restrictions remain in place, as well, with quarantine still required on entry and strict parameters for airlines flying into the country.

The southern technology hub of Shenzhen also locked down at least six neighborhoods in two major districts for four days, asking people to stay home and companies to remain closed, after a dozen infections were found among those quarantined on Saturday. Another 11 local cases were detected for Sunday and two dozen metro stations were closed.

The shutdown includes the Huaqiangbei neighborhood that hosts the world's largest electronics wholesale market. While its significance has gradually faded as online shopping rates soared, a fair number of wholesalers and products including components for phones, cables and electric toys are still sold there.

Chinese state media last week defended the country's zero-tolerance approach, saying "lying flat" against the virus would be disastrous, deploying a disparaging term for relaxed vigilance often used by Xi. The damage to economic growth stems from COVID itself, not the government's measures to contain it, the State Council-affiliated newspaper Economic Daily said in a column on Thursday.

The United States suspended 26 flights by Chinese airlines scheduled for next month amid a dispute over Beijing's COVID policies. The move came after China limited flights by U.S. carriers including United Airlines and Delta Air Lines. China suspends flights if they bring in too many infected passengers, a stark contrast with the United States, which doesn't require COVID tests and has dismantled almost all border restrictions.