The refurbished USS Nautilus, the world’s first nuclear-powered submarine and a historic landmark, is reopening Friday with a new look, the Naval History and Heritage Command announced recently.

“My team is very excited to reopen Nautilus to the public,” Lt. Cmdr. Derek Sutton, officer-in-charge of the Nautilus and director of the Submarine Force Museum, told Stars and Stripes by email Sept. 2. “She is the focal point of our museum and the major story telling mechanism for the US Navy and Submarine Community.”

The Nautilus, commissioned Sept. 30, 1954, led the way for the U.S. nuclear submarine force. It made numerous firsts as a pioneer for boats of its kind and as an operational U.S. submarine. It was decommissioned on March 3, 1980, and declared a National Historic Landmark in 1982.

The Nautilus closed to the public in August 2021 and in October towed up the Thames River to Naval Submarine Base New London, Conn., to undergo $36 million in refurbishments, including a wooden deck replacement, hull restorations and repairs to the vessel’s superstructure.

The Nautilus returned to Naval History and Heritage Command’s fleet of naval artifacts on Aug. 4. The vessel is ported in the Thames River, next to the Submarine Force Museum.

A major difference the public will see is the new external paint job and the topside decking. 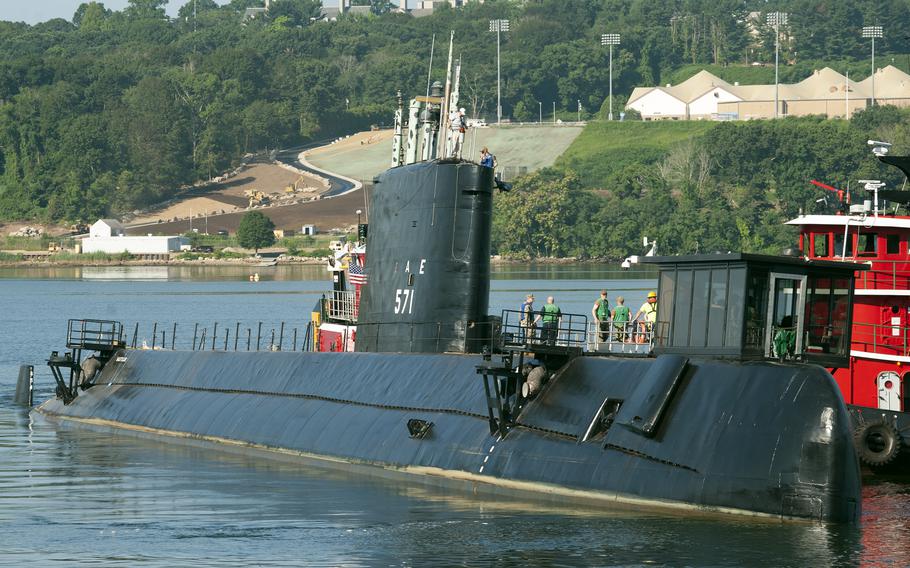 The Nautilus arrives at the Submarine Force Museum in Groton, Conn., Thursday, Aug. 4, 2022, near the end of its $36 million preservation project. (John Narewski/U.S. Navy)

Also, the vessel’s tanks were inspected, repaired and preserved; the lighting system at the back of the vessel was upgraded; and new staff access points for cleaning and maintenance were installed.

The preservation work involved more than 100,000 man-hours by about 12 organizations, including seven months in dry dock at the submarine base, Sutton said.

The Nautilus is the only nuclear submarine open to the public, according to the heritage command.

“The entire experience of touring Nautilus is the best exhibit we have on site,” Sutton said. “For those that have never served or ever seen a submarine, she tells her story of the brave and courageous Submariners that served aboard her and every other U.S. Submarine. For those that served she helps tell specific stories, or bring a tangibility to stories, about what they did (or are doing) and where they lived.”

The Nautilus has a long history. During its 26 years in service, it traversed the Pacific and Atlantic oceans and exercised with NATO allies in Europe and took part in the quarantine of Cuba during the Cuban Missile Crisis in October 1962. It is the official state ship of Connecticut and is formally recognized as a Nuclear Historic Landmark by the American Nuclear Society.

“Nautilus is the ‘first and finest’ in many ways,” Sutton said. “She was the first nuclear powered vessel, the first nuclear powered submarine, and the first vessel to reach the North Pole. She went from concept to commission in only seven years and still gave the Navy nearly 30 years of operational service. She immediately set records for transit speeds, distances, and time submerged.”

The Submarine Force Museum is hosting a ceremony Friday to commemorate the vessel's reopening to the public.¬ State, local and government officials are expected to attend to thank those who helped restore the boat, Sutton said.

“Come and see her for yourself,” Sutton said. “You will not be disappointed; it is an outstanding experience for everyone. For those with mobility limitations or issues with tight spaces (or those that don’t want to brave the rain on a bad day), we have a fully virtual tour available in the museum that allows anyone to virtually walk through all of the normally accessible spaces.”