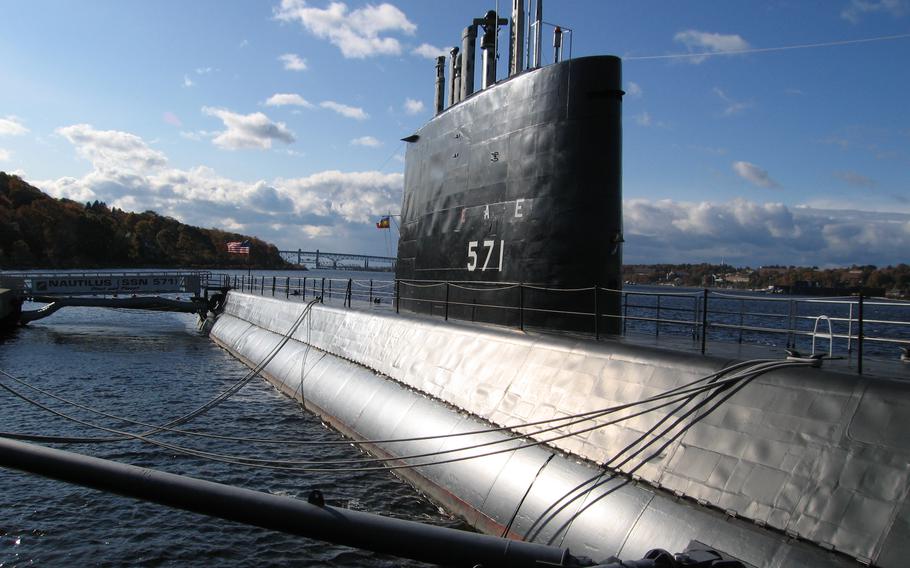 GROTON, Conn. (Tribune News Service) — The USS Nautilus, the world's first nuclear-powered submarine, was towed Friday afternoon from its home at the Submarine Force Museum upriver to a pier at the Naval Submarine Base, where it will undergo an estimated $36 million preservation project.

Capt. Kenneth Curtin, the new commanding officer of the sub base, and other Navy officials said this will ensure the historic ship is around for another 30 years to educate and engage the public. It is expected to return to the museum in the spring or summer.

The last time the Nautilus left its moorings for preservation work, the Navy said, was in 2002 for a $4.7 million refurbishment.

The Nautilus made its maiden voyage in 1955, was decommissioned in 1980 and designated a National Historic Landmark in 1982.

"This revolutionized naval warfare from the time Electric Boat put it into the water until today," said retired Rear Adm. Samuel Cox, director of naval history and heritage command for the Navy. He said this is the most significant work done on the Nautilus since it became a museum ship.

Cox and other military officials spoke in a ceremony outside the Submarine Force Museum before the Nautilus got underway.

The Nautilus is now at the sub base, but Navy spokesperson Chris Zendan said there is prep work to be done before moving the boat to dry dock, and the USS Cheyenne is currently in dry dock.

The Navy said the preservation work will involve repairing and painting the hull and superstructure, replacing topside decking, inspecting tanks and voids, and upgrading lighting and electrical work.

Jim Belz, director of maintenance and modernization at EB, said the company is taking the lead on maintenance activity, and getting support from people with International Marine and Industrial Applicators and Mystic Seaport Museum.

"We're going to completely blast and paint the entire exterior. You can imagine the rust," Belz said. He added that he thinks there will be significant steel replacement under the superstructure, and there will also be beautification work, such as making the engine room brighter.

Belz said a lot of people that will work on the Nautilus have been working on the USS Hartford, a Los Angeles-class submarine. But working on a museum ship, rather than one still in service, is unique.

While the Nautilus is undergoing maintenance, museum visitors can view a virtual tour of the submarine.

In attendance at the ceremony was Gary Schmid, who served on the Nautilus from 1968 to 1971.

Being at the ceremony "means so much, especially to see her underway again," Schmid said. He recalled being on the Nautilus in the Caribbean and elsewhere, and said "everywhere we went with her, you could feel the history."

Schmid, who previously served as president of the Nautilus Alumni Association, said the camaraderie and the goal to keep the ship going still lingers today with those who served on the Nautilus.

Bob Ross, executive director of the state's Office of Military Affairs, noted that while the Nautilus "is away getting her facelift," its pier at the museum will become very busy, as a new landing is being constructed for the Thames River Heritage Park water taxi.

He also called the Nautilus a "tremendous asset" for tourism, history and education.