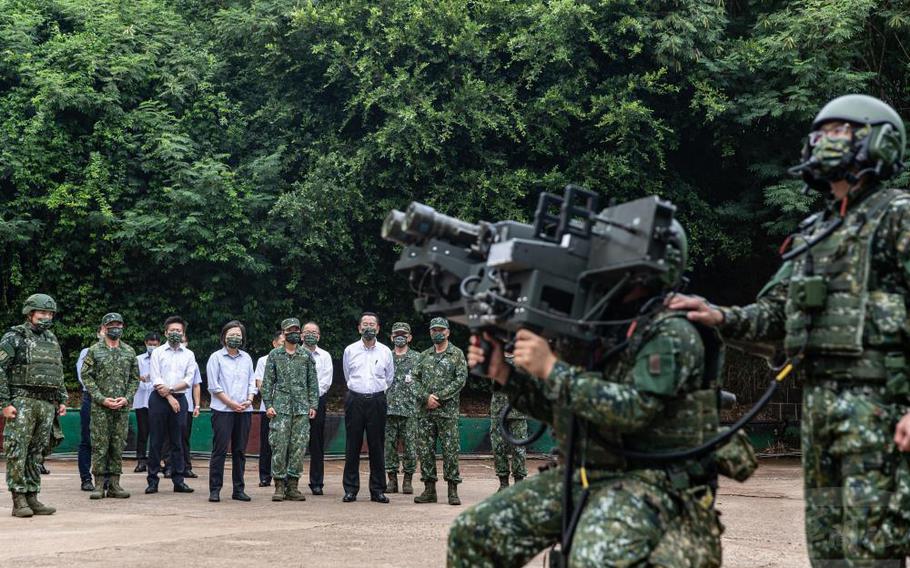 Taiwanese soldiers fired warning shots at a Chinese drone this week as Taiwan’s president announced the military would take “necessary and powerful countermeasures” to protect the island’s airspace.

The Taiwanese military on Tuesday spotted three drones operating near Kinmen, a series of Taiwan-governed islets just off China’s coast. The drones turned back after soldiers threw warning flares, according to a Tuesday statement from Taiwan’s official Military News Agency.

Shortly after, a single drone returned and the soldiers responded by firing warning shots. The drone once again returned to Chinese airspace, according to the report. The statement didn’t clarify the type of weapon used.

The event marked the first use of warning shots during a time of heightened tensions between China and Taiwan, according to a Wednesday report from Reuters.

The warning shots followed remarks from Taiwanese President Tsai Ing-wen, who said the island would not back down in the face of Chinese intimidation, according to a separate Tuesday statement from the Military News Agency.

"The more provocative the enemy is, the calmer we must be,” Tsai said in the statement. “We will not let the other side have improper excuses to create conflict, we will not provoke a war, we will restrain ourselves, but it does not mean that we will not fight back."

Beijing considers Taiwan a breakaway province that must be reunited with the mainland, by force if necessary. Under the “One China” policy, the U.S. acknowledges Beijing’s view that it has sovereignty over the island, which split from the mainland in 1949, but considers Taiwan’s status unsettled.

The threat by China to Taiwan’s security is increasing daily, Tsai said from a military base in the Penghu Islands, an archipelago in the Taiwan Strait. China is using “gray area” methods, including drones and psychological warfare, to intimidate the island, she said.

Tsai also pledged that her government will continue to invest in warships, aircraft and other military equipment to shore up Taiwan’s defenses. The island’s defense budget next year is slated to be $84.9 billion, a record high and an increase of 14% of this year, according to the second statement.

Some of that equipment will likely be sourced from the United States. The Biden administration is preparing to sell a $1.1 billion arms package to Taiwan that would include 100 Sidewinder air-to-air missiles, 60 anti-ship harpoon missiles and support for a surveillance radar previously sold to Taiwan, according to a Tuesday report from Bloomberg News.

The U.S. for decades has sold arms and other equipment to Taiwan, and the Biden administration thus far has proposed at least four arms packages to Taiwan totaling more than $1 billion, according to reports from the Defense Security Cooperation Agency.

The latest sale would more than double that figure.