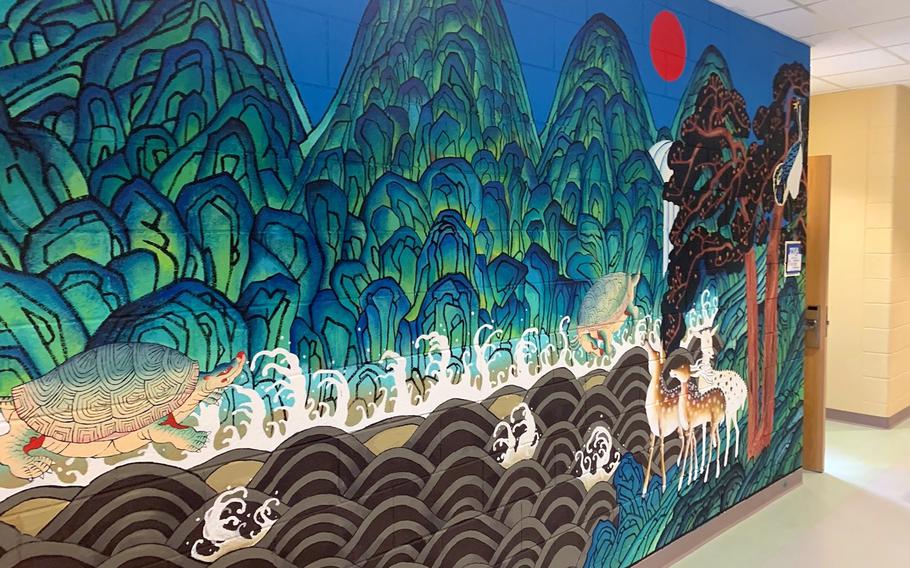 CAMP HUMPHREYS, South Korea — Students of Humphreys West Elementary School discovered a splash of color and a piece of Korean culture when they arrived Monday for the first day of the new school year.

A team of South Korean art students from Chung-Ang University in Seoul over the summer turned two blank walls inside the school into murals that highlight aspects of their country’s culture.

Humphreys West principal Edgar Romero conceived of the project after he arrived in November at the school on the largest U.S. overseas military base. Romero said he found the school lacked artwork and he wanted students to enrich themselves with South Korean culture.

“There are things that children should be exposed to and should be able to talk about” in their culture classes at the school, Romero told Stars and Stripes on Monday. He said many children at the base are multiracial Korean Americans.

“I needed to bring that little bit of Korea back into the building so that the host-nation teachers could truly bring and immerse the kids,” he said of the Korean staff who teach the country’s culture. 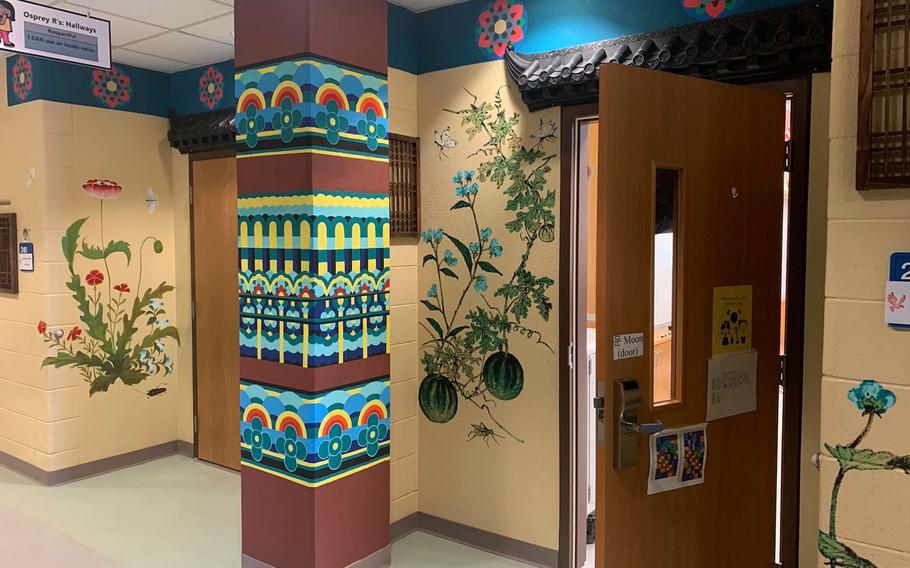 Previously the assistant principal at Osan Middle High School on nearby Osan Air Base, Romero said he has lived in South Korea for 17 years. Exposing military families to South Korean culture has been a challenge, he said, particularly when off-base travel was restricted due to the COVID-19 pandemic.

“The parents actually have to make a bigger effort to get to a folk village or to really expose them to folk art in Korea,” Romero said.

Most military families spend only two to three years in South Korea, too short a time to acclimate to the host nation’s culture.

Romero floated the mural idea to the school’s Parent Teacher Student Organization, which allocated roughly $2,000 for the project.

The five students commissioned for the project worked in 12-hour shifts over 11 days to complete the two murals, which are on opposite ends of a wall inside the school. The artists painted in an ancient Korean style and included images of mountains, fruits, insects and wildlife. One of the murals was completed in May and the other was finished earlier in August.

“The artwork we did was a bit difficult,” he told Stars and Stripes by phone on Friday. “When we started the work, we worried a lot because the teachers could get disappointed, or we could hurt our pride if we made a bad job of it. We are painters, so we could not ignore this.”

This was the group’s first time painting on a U.S. military base, Seo said. He described the experience as “totally different.”

“I felt like I went on a trip abroad,” Seo said. “And, I had butterflies in my stomach.”

School officials are discussing plans to allow Humphreys West students and other organizations on the base to paint more murals at the school, Romero said.

The murals are popular with the Humphreys West students, said Jeannette Rho, an education technologist at the school.

“They loved seeing it,” she said Thursday. “It was just bringing color, not only just the tradition, but color, to our elementary school.”