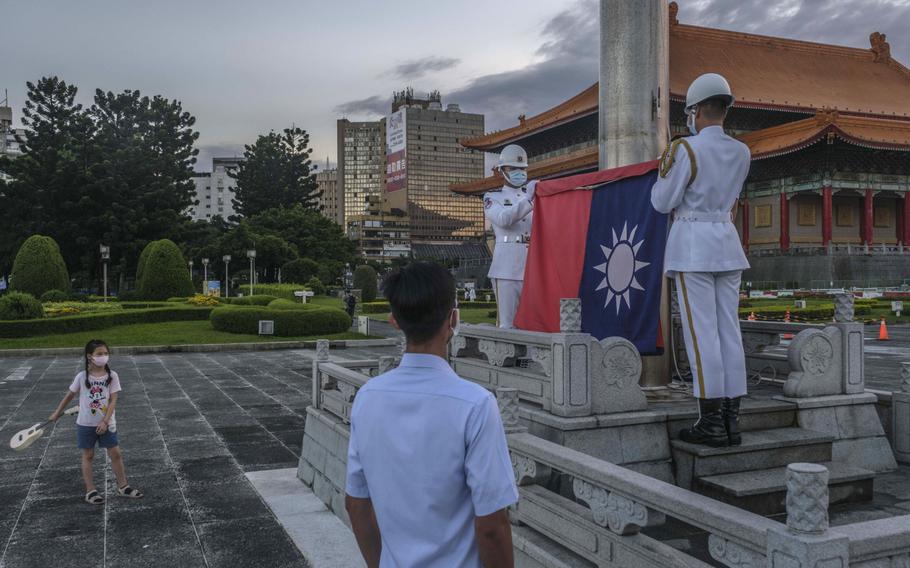 Soldiers lower the Taiwanese flag during a ceremony at the Chiang Kai-shek Memorial Hall in Taipei, Taiwan. on Aug. 4, 2022. (Lam Yik Fei/Bloomberg)

China’s military exercises are making ships think twice about heading into one of Taiwan’s most important ports, creating potential delays for shipments of electronic goods.

Ships are dropping anchor at sea to avoid a drill zone located just outside Kaohsiung port in Taiwan’s south, said Jayendu Krishna, deputy head of consultancy Drewry Maritime Advisors. The zone is one of the largest areas that China is carrying out exercises, and is 15 nautical miles away from the entrance of the port.

Ship owners are worried about the possibility of missiles hitting their vessels, choosing to idle vessels and burn extra fuel until the drills pass.

“They will avoid going to Kaohsiung for the next two to three days, because that’s directly in the line of fire,” said Krishna. “Some drybulk ships and tankers have been asked to anchor and wait for orders.”

Kaohsiung is operating normally, and no unusually high ship congestion was found in the outer seas, according to the port’s vice president, Su Jiann-rong. “There has been no impact from the military drills so far,” he said, and there are empty piers available in the harbor.

No ships have cancelled plans to enter or leave ports on Thursday, according to a statement from Taiwan’s Transportation Ministry.

The Taiwan Strait is a key route for supply chains, with almost half of the global container fleet passing through the waterway this year. While vessels are continuing to travel through the strait during the military exercises, they are navigating around the drill zones.

Some shipowners have barred their vessels from transiting the strait. Two liquefied natural gas suppliers informed ships to not travel through the waterway until they can confirm the military drills have ended, according to traders with knowledge of the matter.

Kaohsiung city is a major stop for vessels picking up Taiwanese semiconductor chips, and is also where state-refiner CPC Corp. makes petrochemicals for factories of manufactured goods all across the world, said shipping experts.

Additional delays are likely to ripple out and eventually affect shipments of Asian goods headed to the U.S., said Drewry’s Krishna.