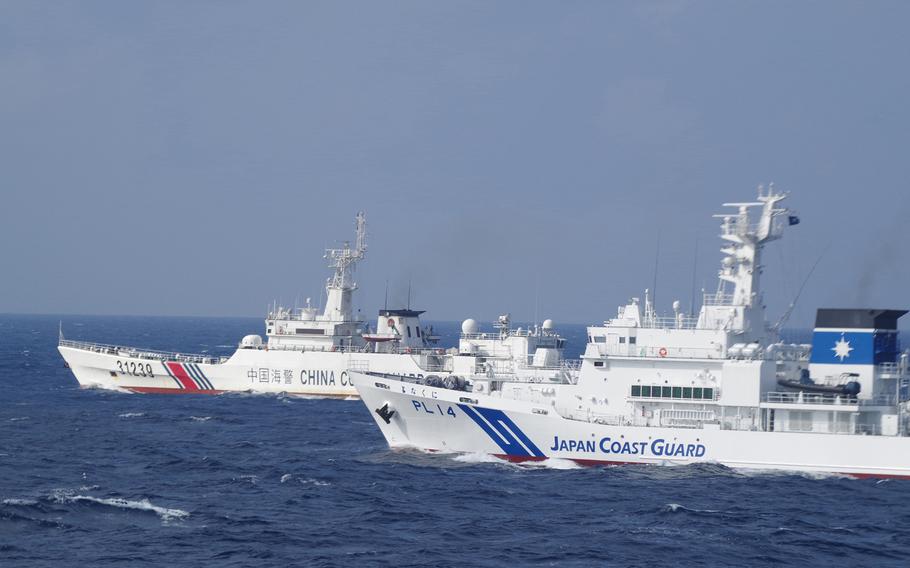 CAMP FOSTER, Okinawa — A flotilla of Chinese coast guard vessels sailed into Japanese territorial waters in the East China Sea on Friday, just days ahead of a visit to the region by U.S. House speaker Nancy Pelosi.

The four ships entered Japan’s territory south of Uotsuri and Kuba islands, part of the uninhabited but disputed Senkaku chain, at approximately 4:30 p.m. and stayed about two hours, a spokesman for the Japan Coast Guard's 11th Regional Headquarters told Stars and Stripes by phone Monday. It was the first such intrusion by a Chinese vessel since July 8.

The United States has long declined to take a position on the sovereignty of the Japan-controlled Senkakus, which are known as Diaoyu Dao in China. U.S. presidents, including Joe Biden, Donald Trump and Barack Obama, have declared that they fall under the U.S.-Japan security alliance.

The Senkakus are about 105 miles northeast of Taiwan, which also claims the islands. Rumors that Pelosi will stop in Taiwan during her Asia tour have further fueled tension with Beijing.

The speaker’s delegation arrived in Singapore early Monday, according to The Associated Press, and is scheduled to also visit Malaysia, South Korea and Japan to discuss trade, the COVID-19 pandemic, climate change, security and “democratic governance,” according to a weekend statement from Pelosi’s office.

The statement did not mention Taiwan, which Beijing claims as its own territory. Chinese President Xi Jinping, during a phone call with Biden last week, warned against meddling in his country’s dealings with the island, according to AP.

Pelosi, who is second in line for the U.S. presidency, would be the highest-ranking U.S. official to visit Taiwan since Newt Gingrich in 1997. An unannounced visit will surely be viewed as a provocation by China, said security expert Toshiyuki Shikata, a former lieutenant general in the Japan Ground Self-Defense Force.

“I don’t think there will be a war, but it could give a reason for China to take some kind of action directly against Taiwan,” Shikata, a professor emeritus of international relations at Teikyo University in Tokyo, told Stars and Stripes by phone Monday.

As Pelosi prepared for her visit, China held live-fire military drills in the Taiwan Strait on Saturday. A warning from the local maritime agency said the exercise would take place near Pingtan in Fujian province.

It was the first live-fire drill announced by the agency in at least a year, according to AP.