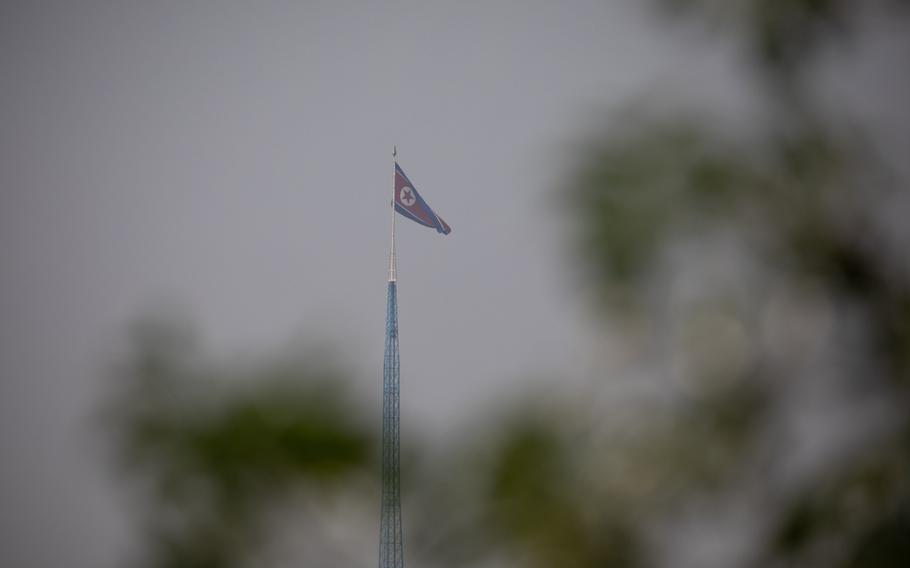 A North Korean flag flies above North Korea's Gijungdong village during a media tour of Daeseong-dong village in the Demilitarized Zone (DMZ) of Paju, South Korea, on Sept. 30, 2019. (SeongJoon Cho/Bloomberg)

North Korea’s economy failed to rebound last year as the impact of pandemic measures on trade continued to weigh, with the prospects for growth this year clouded by a surge in virus cases that was finally recognized publicly by Kim Jong Un’s regime.

Gross domestic product in North Korea contracted 0.1% in the 12 months through December, according to South Korea’s central bank Wednesday. North Korea’s economy already shrank 4.5% in 2020 as the pandemic prompted the official closure of its border with China, triggering its worst slump in decades.

The figures hint at the continued blow to the North’s economy from the fallout of COVID-19 even before Kim acknowledged rocketing cases of “fever” in May. Recognition of the outbreak likely meant virus infections had mushroomed beyond a scale that could be ignored.

“The economy may have contracted last year more than reported because border closures pummeled the trade that served as a lifeline for underground markets,” said Cho Han-bum, a research fellow at the Korea Institute for National Unification. “Unless it reopens borders at least partly, the situation will get worse.”

The Bank of Korea’s figures are among the very few regular estimates of North Korea’s economy. The North’s economic performance is extremely difficult to gauge given the lack of official data and a lack of clarity over how successfully Pyongyang is evading sanctions and how much money it may be generating from activities such as alleged online fraud and cryptocurrency theft.

North Korea has also repeatedly shown that it puts its military objectives ahead of any goals for wider economic development for its population at large. That makes its GDP performance, however accurate it may be, a poor indicator of how Kim will conduct policy.

The fever outbreaks have emerged as the largest threat this year to North Korea’s economy. Kim has called the spread the biggest turmoil since the nation’s founding, invoking the nightmare of the 1990s famine estimated to have killed as many as millions of people.

While Pyongyang says it had the flareup under control by the end of May after a lockdown for most of the month, the impact will likely have slowed any recovery in the economy this year. Daily infections reportedly peaked at just under the 400,000 mark earlier that month.

There has been no outside verification of the numbers provided by North Korea. KINU’s Cho said North Korea may be reporting fewer cases than actual because it wants to provide the pretext for an economic reopening after saying it has controlled the situation.

Even the spread of milder strains of the virus may have caused a higher incidence of serious illnesses and deaths among North Korea’s unvaccinated population than they caused in other countries where most people had been given multiple shots to protect them.

The country also lacks basic equipment and materials such as respirators and oxygen to deal with serious virus cases. Pyongyang has also spurned offers from other countries to provide medical supplies and personnel.

A large portion of North Korea’s population also struggles to gain adequate medical care. A 2020 study shows most North Koreans can’t afford medical help and, even if they did, supplies are lacking.

Still, North Korea says its fatality rate from the outbreak is far lower than that in South Korea. That has raised questions about the veracity of the claims.

Nevertheless, the country’s ability to mobilize its military to help enforce some of the world’s toughest controls on civilian travel between cities, likely made it easier to stem the transmission of the virus. But more restrictions also likely meant more constraints on the flow of goods essential to the economy and the livelihood of its people.

Still, the role that black markets play should not be underestimated in a country where business activities often go unreported and smuggling is common, said Lee Ji-sue, a North Korea analyst at Seoul’s Myongji University.

“The real economy in North Korea is an underground one,” he said. “Risks for businessmen have likely grown amid Covid disruptions, but their rewards may have grown bigger, too.”

Below are further details from the BOK, which bases its calculations on data obtained from a range of South Korean agencies:

— Mining, a key source of income until sanctions started to sap demand for its iron ore, minerals and other resources, contracted 11.7%