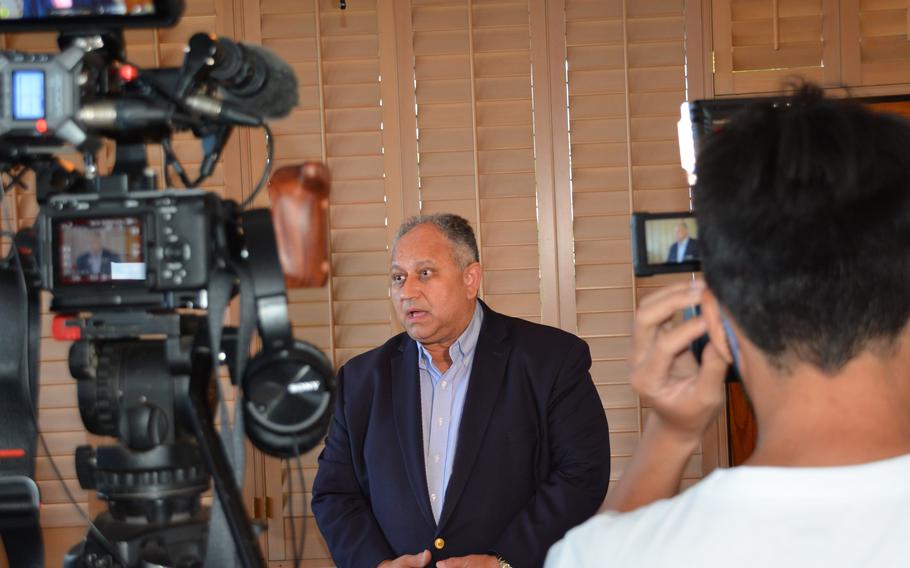 JOINT BASE PEARL HARBOR-HICKAM, Hawaii — Secretary of the Navy Carlos Del Toro arrived in Hawaii on Saturday to review the multinational fleet assembled here for the Rim of the Pacific exercise.

On Sunday, he flew from Pearl Harbor to the aircraft carrier USS Abraham Lincoln at sea in nearby waters, where 38 surface ships from 26 nations are conducting drills until Aug. 4.

Del Toro touted the importance of the biyearly RIMPAC in maintaining the current “rules-based” order in the Indo-Pacific during a news conference at Joint Base Pearl Harbor-Hickam after returning from the carrier.

The exercise contributes to the “agility needed by the joint and combined force to deter and defeat aggression by major powers across all domains and levels of conflict,” he said.

RIMPAC demonstrates the power to bring together 26 nations “that our adversaries cannot replicate themselves – Russia and China or anyone else out there,” he said.

“There are nations in the world that would have one believe their sovereign territories extend well beyond the established rules and norms,” he said. “They aim to misrepresent our lawful U.S. maritime operations, such as the USS Benfold’s recent freedom-of-navigation operations in the South China.”

The Benfold, a guided-missile destroyer, on Wednesday steamed past the disputed Paracel Islands in the northern portion of the South China Sea. On Saturday, the warship passed by the Spratly Islands in the southeastern part of the sea.

China claims sovereignty over both sets of islands, but other Southeast Asian nations have made similar claims, none of which have been resolved.

China reacted angrily to the passage on Wednesday, saying in a statement that the U.S. was a “risk maker.”

Del Toro will later this week travel on to Singapore, Thailand and the Philippines, he said.

On Sunday, a Peruvian Navy corvette, the BAP Guise, experienced an engine room fire that seriously injured two of its crew, according to statements from the Peruvian and U.S. navies. French and U.S. helicopters evacuated the injured from the ship to a hospital in Honolulu.

Among the at-sea drills are amphibious operations, gunnery practice, anti-submarine exercises and mine clearance.

Last week, ships and aircraft from Australia, Canada, Malaysia and the United States completed a targeting exercise that ended in the sinking of the decommissioned USS Rodney M. Davis.

The ship hulks are required to be sunk at least 6,000 feet below the surface and at least 50 nautical miles from land, the Navy said in a news release Friday.

The guided-missile frigate, which was decommissioned in 2015, had been named for a U.S. Marine sergeant who was posthumously awarded the Medal of Honor after dying in combat during the Vietnam War.