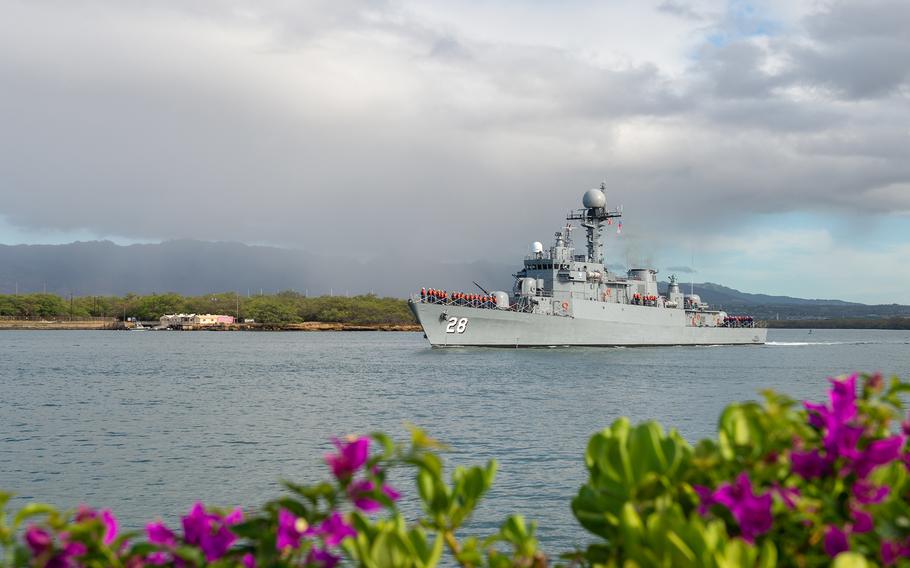 Two crew members suffered burns in a fire aboard a Peruvian warship involved in the multinational Rim of the Pacific naval exercise off Hawaii, according to the Peruvian Navy on Sunday.

A fire broke out at 1 p.m. that afternoon on the Peruvian corvette BAP Guise, burning the crew members, who were later evacuated by helicopters from the French and U.S. navies to a hospital in Honolulu, according to a Peruvian Navy news release.

An earlier release by the U.S. Navy said the fire occurred in the ship’s engine room.

None of the other Guise crew were injured, according to the release. It said the fire was extinguished by the Guise crew with help from foreign units.

“The combined RIMPAC force is providing support to the vessel,” according to an earlier RIMPAC tweet.

The fire aboard the Guise occurred during the “at-sea” portion of the exercise that began a week ago. That part of the exercise is intentionally not scripted to force the participating navies to adapt to conditions on the fly, Vice Adm. Michael Boyle, commander of U.S. 3rd Fleet, said July 9.

“It will have some free play that will allow commanders of ships, commanders of task forces and myself to have to think through problems and adapt our plans to be able to overcome what the threat or the environment is presenting to us,” he said.

RIMPAC, which lasts until Aug. 4, is a biannual exercise that this year brought together 38 ships, four submarines, 30 unmanned systems, 170-plus aircraft and more than 25,000 personnel, including troops from land forces from nine nations.

RIMPAC is considered the largest naval exercise in the world. Much of it takes place off the coasts of Hawaii and California and onshore.

Prior to the handover, the corvette was extensively overhauled, including its hull, mechanical and electrical systems. “The ship’s MTU 125V956 TB 82 diesel engines and GE LM 2500 gas turbine were disassembled and reviewed, and new parts were installed where necessary,” Janes reported Dec. 1, 2021.

A Peruvian naval commission inspected the corvette between April 5, 2021, and July 4, 2021, the website reported.