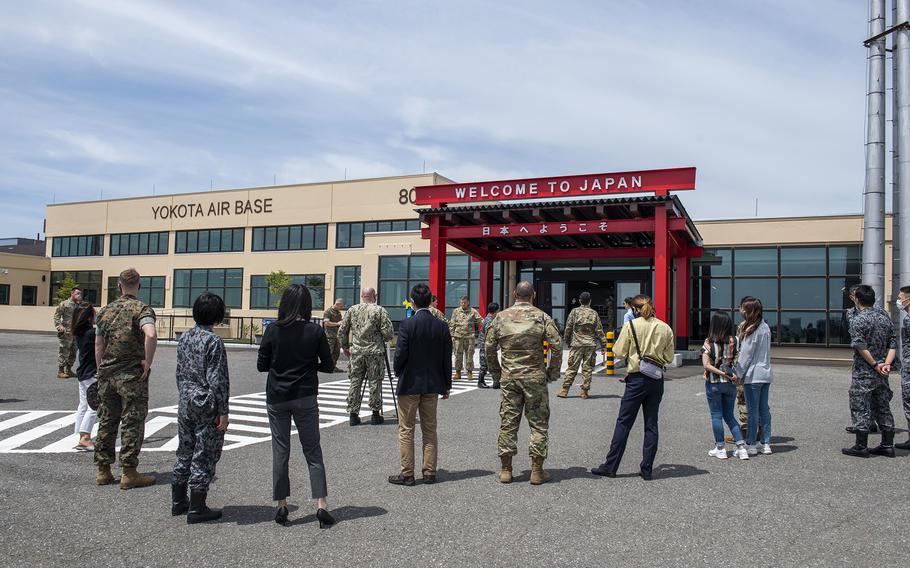 YOKOTA AIR BASE, Japan — The Air Force said it’s making changes at its air terminals around the world to safeguard traveling pets after a family’s dog died in transit July 1 in Japan.

For the rest of the summer, Air Mobility Command will allow traveling pets into climate-controlled terminals when the outside temperature reaches 85 degrees Fahrenheit, according to a post Wednesday on the command’s official Facebook page. Summer is when many military families move to their new duty stations.

Passenger terminals operated by the 515th Air Mobility Operations Wing throughout the Indo-Pacific also will store animals in a climate-controlled environment as they await their flights, Maj. Hope Cronin, a spokeswoman for Air Mobility Command at Scott Air Force Base, Ill., said in an email Wednesday.

The dog, Kolbie, a 10-year-old Pomeranian mix, died of heat stroke on the Patriot Express during its leg between Yokota Air Base and Marine Corps Air Station Iwakuni, both in Japan. The dog’s owners, Amber Marie Panko and Marine Corps Gunnery Sgt. Christopher Panko, faulted aircraft handlers at Yokota in western Tokyo for leaving the dog in a garage during a layover. The Pankos had arrived in Japan after a 12-hour flight from Seattle.

“Gen. Mike Minihan, Air Mobility Command commander, and the commander of the 730th Air Mobility Squadron, personally reached out to the Panko family to extend their condolences at the loss of Kolbie, get additional details on what occurred, and assure them that all measures are being taken to ensure AMC Patriot Express missions are as safe as possible for families traveling with pets,” said the command’s statement on Facebook.

The 730th Air Mobility Squadron is restoring power to an adjacent, temporary terminal facility at Yokota to provide additional areas for families with pets and is sourcing an aircraft air conditioning cart to help keep pets cool during the loading process, Cronin said in her email to Stars and Stripes. The passenger terminal at Yokota reopened June 13 after an extensive, $27.5 million renovation.

“We recognize pets are a deeply important part of many families’ lives, and we take seriously the responsibility of safely transporting them when they are entrusted to our care,” said Air Mobility Command.

The command said it is investigating whether all pet transport protocols were followed when the Patriot Express stopped at Yokota on July 1. “At this time, our initial findings indicate our aerial port specialists followed established pet transport protocols and there is no evidence of intentional negligence. Unfortunately, these protocols did not adequately factor in the extremely high temperatures and humidity Yokota was experiencing over the July 4 weekend,” said the statement on Facebook.

The command also addressed a Facebook post Monday by Leave No Paws Behind USA that two other dogs had died on the same Patriot Express flight with Kolbie. The Patriot Express is a government-contracted air service that flies between the U.S. and overseas military bases.

No other dogs died on that flight, according to the command. The 515th Air Mobility Operations Group, the parent unit to the 730th at Yokota, found that 10 other dogs on the same flight arrived safely at their destinations.

“While we cannot change the outcome of this unfortunate situation, AMC leadership is committed to ensuring this never happens again,” said the Air Mobility Command statement.

However, one dog apparently died in June aboard a Patriot Express flight out of Guam.

Navy spouse Julie Barker, 38, of Chicago, was on a flight from Guam to Chicago via Seattle on June 5 when she saw that another passenger had lost his dog, a pug.

The flight stopped for a layover at Joint Base Elmendorf-Richardson, Alaska.

“When we arrived, I took my dog out and then I see this guy holding his dog in his arms and at first I thought he was just cuddling him,” Barker told Stars and Stripes by phone on Wednesday. “Then I look at him and he's like crying and I'm just like ‘Oh, my God is he dead? And he's like, ‘Yes.’ ”

She said the dog could not reach its water bottle, which was twisted outside his crate.

“When he opened the crate, the dog was dead and he said that his first reaction was like, he's still warm,” Barker said. “I asked him, what do you want me to do? We need to do something because it's, it's horrible.”