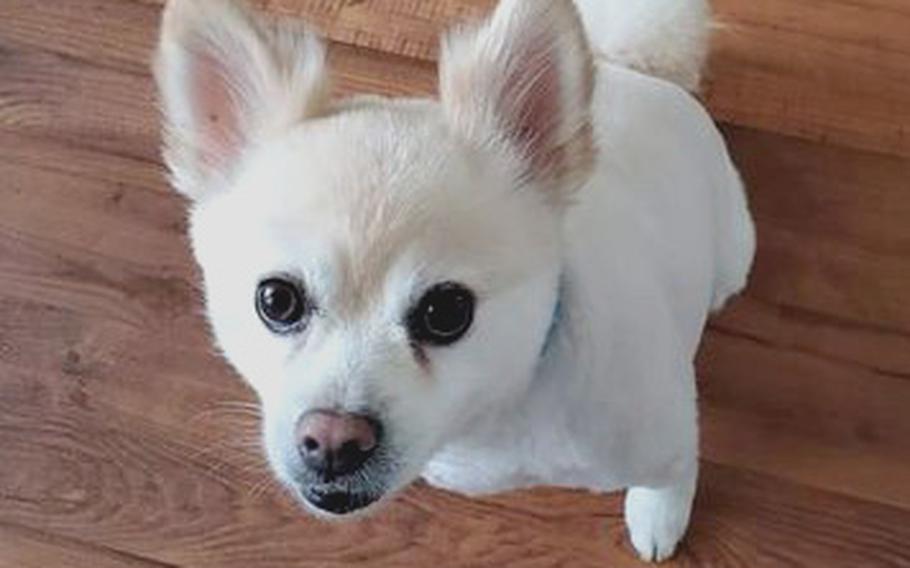 YOKOTA AIR BASE, Japan — A Marine family is unhappy with the Air Force Air Mobility Command over the death of their dog July 1 on a flight to Okinawa on the Patriot Express.

The diminutive dog, Kolbie, was found dead on board the plane when it reached Marine Corps Air Station Iwakuni, Japan, after a 12-hour flight from Seattle and a layover at Yokota Air Base in western Tokyo. His owners last saw Kolbie alive at Yokota, an airlift hub, before the hour-long leg to MCAS Iwakuni, according to a Facebook post July 4 by Amber Marie Panko.

Amber Panko wrote that Kolbie was left outside in the heat during the Yokota layover. “An hour he was sitting in an open garage in 100-degree weather before being boarded and sitting in cargo for over an hour in what was well over 100 degrees,” she wrote.

Christopher Panko, a native of Erie, Pa., and an engineer with Marine Corps Installations Pacific on Okinawa, said a lieutenant colonel with the 730th Air Mobility Squadron at Yokota contacted his wife about Kolbie a week later.

“That was it. No one from, like, the actual AMC command,” he wrote. The lieutenant colonel said he was sorry and “knows he should have reached out sooner,” Christopher Panko said by Messenger.

A senior noncommissioned officer at the 730th squadron referred Stars and Stripes to Air Mobility Command in Hawaii, but a spokesperson there could not be reached Thursday. The command on its official Facebook page early Thursday said it’s looking into the incident and was trying to contact the family.

“We first want to extend our deepest condolences to the family for the loss of their beloved dog, Kolbie,” the post states. “AMC’s Aerial Port specialists take seriously the responsibility to maintain and enforce established pet transport protocols while they are entrusted to our care. We are working diligently to contact the family to reconstruct what transpired, identify potential areas of concern and devise actions we can take now to mitigate a future incident.”

“I know many of you have been asking for updates and up until this point I have been trying to give them a chance to just do the right thing,” Panko wrote. “This is not happening.” The Pankos with their three children and Kolbie left Seattle for Okinawa around 9 a.m. June 29 on the Patriot Express, a government-contracted air service that connects the U.S. with bases overseas, according to Amber Panko. The family was moving from Camp Pendleton, Calif., to Gunnery Sgt. Panko’s new duty station on Okinawa. Their flight reached Yokota about 12 hours later, on July 1, according to Amber Panko.

She had given Kolbie trazadone before leaving Seattle, Amber Panko wrote. Trazodone, a prescription sleep aid, also works as an anti-anxiety drug for dogs, according to Veterinarians.org. At Yokota, the Pankos took Kolbie off the plane to relieve him, she wrote.

“He was perfect! Wagging his tail and so excited to see us,” she wrote. “We asked if we could take him in the station because it is air conditioned and they told us no that the animals were not allowed. We could relieve them at the pet relief station in the front of the building and give him food and water but they weren’t allowed in the building.”

Tokyo was muddling through a heat wave and recorded a high of 95 degrees Fahrenheit that day. The temperature was hotter on the Yokota flight line, Panko wrote.

After the break, Kolbie was left in the heat another hour before being boarded again, according to Panko’s post. At MCAS Iwakuni, someone asked for Christopher Panko, and Amber Panko “knew something was wrong…”

Kolbie had died. “I could have dropped right there. For some reason I was still telling myself no, my baby is fine.”

She spotted her husband in tears, leaning over a rail outside the plane.

“My family and I were just devastated,” Christopher Panko said Thursday. “My wife is really at a loss and it was ultimately her dog.”

Amber Panko in her post said she spent several minutes with Kolbie in a refrigerated room, saying goodbye. An air station veterinarian said the body had to remain behind for the necropsy, Panko wrote.

“He looked so sad and scared in his eyes. I could tell he suffered,” she wrote. “Some may think it’s ridiculous he’s just a dog but he wasn’t … For ten minutes I sat in a cold room sobbing and begging for this to not be a reality.”

In the future, Christopher Panko said, he hopes Air Mobility Command allows travelers to bring their dogs in from the heat and avoids putting animals aboard aircraft for long periods in high temperatures.

Air Mobility Command in its statement said it will look closely at the incident.

“The family deserves to know exactly what happened,” according to the statement, “and we need to better understand how we can prevent this from happening in the future.”