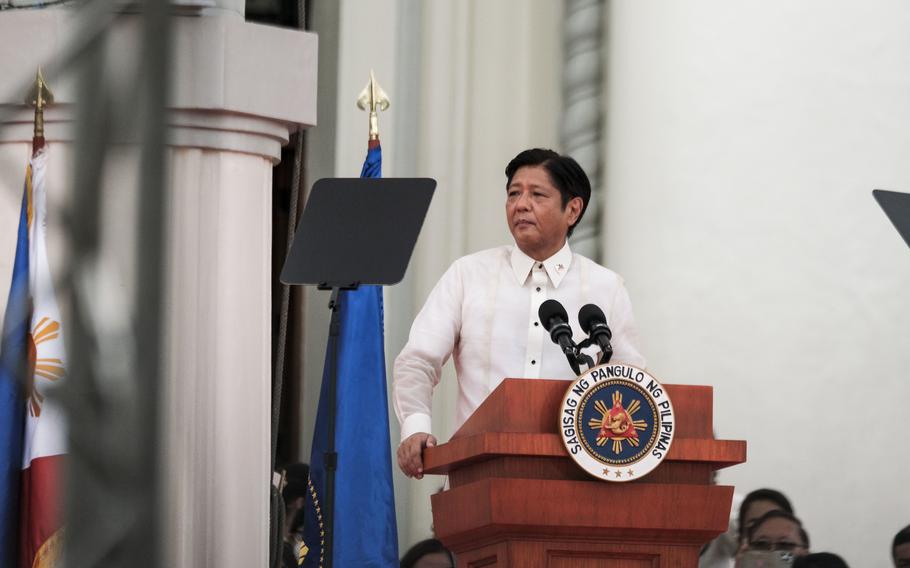 Ferdinand Marcos Jr., the Philippines' president, during the swearing-in ceremony at the Old Legislative Building in Manila, Philippines, on June 30, 2022. (Veejay Villafranca/Bloomberg)

Marcos said at a briefing Tuesday he will “find ways to work to resolve the conflicts” with Beijing when he meets with Chinese Foreign Minister Wang Yi. The Southeast Asian nation’s links with China should be strengthened and are not limited to the disputed sea, Marcos added.

“Let’s add to that: let’s have cultural exchanges, educational exchanges, even military, if that will be useful,” the Philippines leader said.

Wang Yi is visiting the Philippines on Tuesday and Wednesday.

The two nations’ tensions in the contested waters have heightened in the past weeks, with Manila protesting Beijing’s alleged illegal fishing and shadowing of Filipinos’ boats. The Philippines also ended oil exploration talks with China.

Marcos earlier said he plans to negotiate a deal with China to resolve the dispute, while also planning to uphold Philippines sovereignty and its military alliance with the U.S.