Overseas retirees left guessing on cuts to US military mail 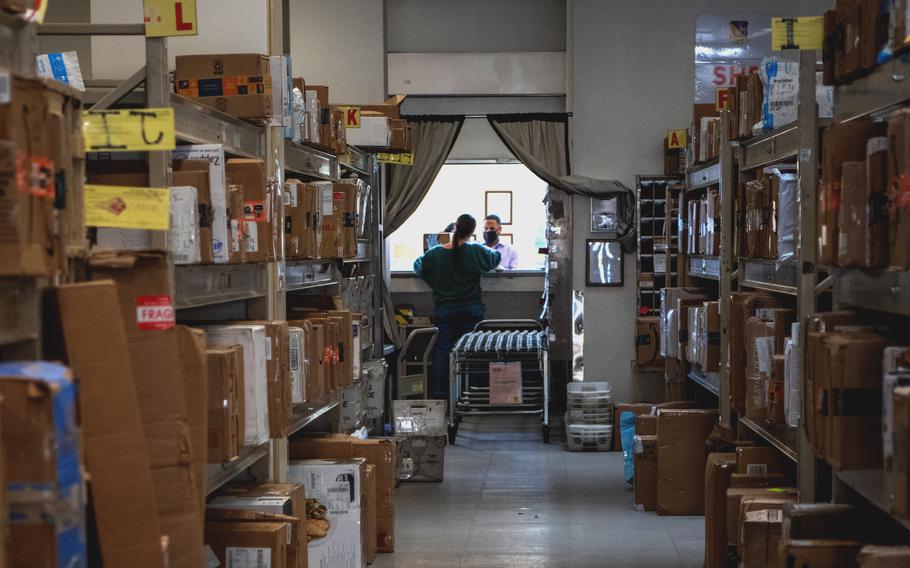 CAMP HUMPHREYS, South Korea — Several categories of patrons are inappropriately benefiting from overseas mail delivery by the Military Postal Service Agency, the Department of Defense said recently, although it stopped short of identifying them.

Military retirees living overseas believe they may be among those about to lose their government mail privileges, which would leave them reliant on their host nations’ postal services for delivery of benefit checks and medications, several retirees told Stars and Stripes.

“There was no advanced notification and no justification,” Charles Seland, a retired Army colonel and former Red Cross assistant field director living in Germany, told Stars and Stripes by phone on Friday. “The frustration is that this thing was so sudden, no prior warning and no explanation.”

The DOD has ordered the agency, an extension of the U.S. Postal Service that reports to the Army, to end mail services for some patrons, including overseas military retirees and Red Cross workers, starting Aug. 24, the postal superintendent at Camp Humphreys, James Goff, said June 15.

A DOD legal review found that some overseas patrons were “not authorized by law” for overseas delivery by the Military Postal Service Agency, according to an email Tuesday from the Office of the Secretary of Defense to Stars and Stripes. The department did not specify what patrons were improperly benefiting from the service and did not respond by Friday to requests for further information.

“The Department is reviewing this matter and is sensitive to addressing the needs of current MPS patrons in a timely manner,” according to the DOD statement.

The military postal system is the same service that delivers mail and packages overseas to service members, DOD civilians, contractors and their families, while charging domestic postal rates.

The DOD review also found that some categories of postal patrons are not permitted by their host countries to receive deliveries from the U.S. military postal service, according to the email. The review could not determine who pays for mail services for seven categories of patrons, the email states.

The proposed change has caught retirees by surprise. Many rely on the Air/Army Post Office, or APO, and Fleet Post Office, or FPO, for regular delivery of their retirement and medical benefits.

Retirees in Germany, for example, have used the military’s postal service for decades and have yet to receive official notice of the possible change, Seland said.

Retired Army 1st Sergeant John Gilbert, a former infantryman living in the Philippines, said he depends on the military postal agency to receive his checks from the Social Security Administration and the Foreign Medical Program.

“Where I chose to live is my decision,” Gilbert said. “My benefits should be portable and no different than the veteran who lives anywhere else.”

The Foreign Medical Program, a service of the Veterans Affairs Department, will not deposit his benefits directly into his bank account, forcing him and other retirees in the Philippines to rely on the military agency to deliver their checks, he said.

Tens of thousands of U.S. military retirees lived overseas as of 2020, according to a DOD retirement report in 2021. Roughly 12,500 retirees live in Puerto Rico, a U.S. territory with the largest military retiree community outside of the continental United States. Germany hosts the second largest number with 7,366, followed by 3,354 in the Philippines. Japan and South Korea have 3,196 and 1,677 retirees, respectively.

Gilbert said his mail is routed to the U.S. consulate, picked up by locally contracted couriers and delivered to his home. Ending mail privileges would dismantle that system, prompt layoffs and force retirees to rely on their host nations’ postal services, which Gilbert describes as expensive and “simply not reliable.

“It’s discriminatory against overseas veterans,” Gilbert said. “Either veterans are entitled to their benefits or they’re not. They need to make up their mind instead of chipping away.”

In South Korea, the impact of ending mail privileges would be “enormous,” the Eighth Army Retiree Council said in an email addressed to over 800 retirees there. Military widows and Red Cross employees would also be affected, according to the council.

“We have never left the U.S. in our hearts,” according to the council email, “but it now appears the U.S. is about to leave us.”