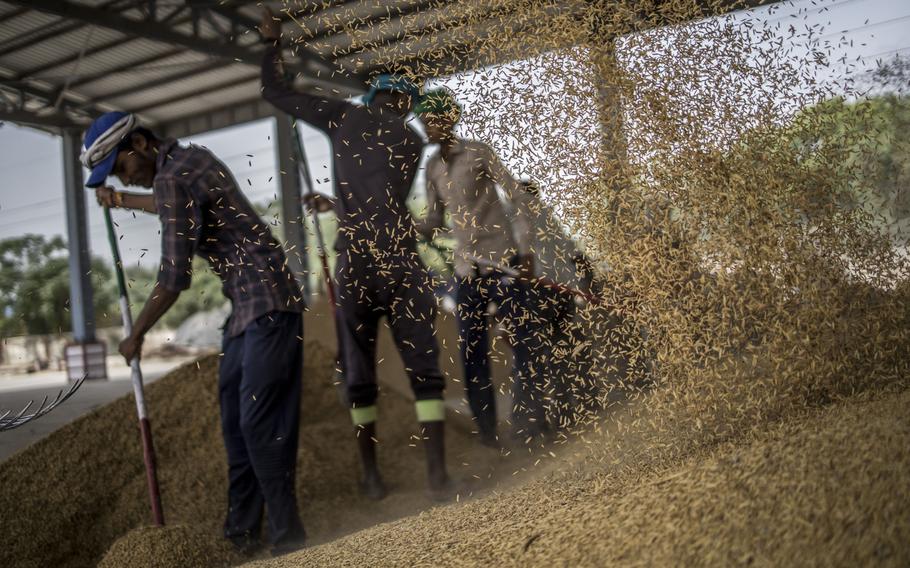 Workers prepare a pile of paddy grains at a wholesale market in the Narela district of New Delhi, India, on May 22, 2022. (Anindito Mukherjee/Bloomberg)

A plan proposed by the Group of Seven nations to mitigate a looming global food crisis is confronting an immovable force — India.

Next week in Geneva, the world's trade ministers will consider a proposal that's backed by more than 50 nations to avoid a cascade of international food export restrictions that may spark destabilizing, hunger-driven conflicts in the world's most volatile regions.

"At the end of the day they are making matters worse," European Union Executive Vice President Valdis Dombrovskis said in an interview with Bloomberg. "Worse for the most vulnerable countries — exactly those who need support during this food security crisis."

Russia's war with Ukraine disrupted global trade for critical cereals, oils and fertilizer, which drove food prices to an all-time high in March, according to the United Nations Food and Agriculture Organization.

Faced with the prospect of rising food prices at home, more than two dozen nations have responded with export restrictions for food and fertilizer, according to data provided by the University of St. Gallen's Global Trade Alert.

At a time when nearly 200 million people are already facing crisis-level food insecurity, there's a risk that this trend toward protectionism could lead to a domino effect and aggravate shortages in net food importing nations like Egypt.

Such a scenario is not without precedent. It happened 15 years ago when a global spike in food prices led to a wave of major economies banning critical exports.

The 2007-2008 food crisis sparked civil unrest in poorer Asian and African nations and emerged as a contributing factor to the Arab Spring protests in nations like Algeria and Tunisia.

"Look at what happened with the Arab Spring and the anarchy; that was really the result of high food prices," said Flexport CEO Ryan Peterson at the World Economic Forum last month. "I predict you are going to see similar levels of crisis across any food importing nation, especially the poor ones that don't have fossil fuels."

India could play a key role in averting a downward spiral of food protectionism at this week's World Trade Organization ministerial conference in Geneva.

But New Delhi is effectively stymieing all negotiations at the WTO and putting at risk the G-7's effort to prevent an acceleration of food prices. India is also blocking a popular deal to aid the World Food Program's ability to purchase critical foods for humanitarian aid.

The WTO operates according to the principal of consensus, which means any one of its 164 members can block any agreement for any reason.

"If we don't find solutions, the countries that would suffer would be the poorer countries of the world," WTO Director-General Ngozi Okonjo-Iweala said at the World Economic Forum.

So, why is India holding the G-7's plan hostage? Modi's government wants to water down the WTO's subsidy rules for public stockholding programs aimed at feeding poor citizens.

While WTO rules permit nations to buy food to help feed poor citizens, they restrict programs that do so by exclusively sourcing from local farmers, and prohibiting food exports from these programs.

India has long been concerned that its program, which buys exclusively from Indian farmers and has exported in the past, could be challenged at the WTO as illegal.

While the WTO's agriculture negotiations have been deadlocked on this issue for decades, India argues that the looming food crisis has brought a new urgency to this debate.

"We have requested the WTO to remove the condition that we cannot remove our grain stocks procured for food security," Indian Commerce Minister Piyush Goyal told World Economic Forum attendees. "If the WTO would consider removing that clause there could be many countries that we could help with their grain requirements."

The Indian embassy in Geneva and the Trade Ministry in New Delhi didn't immediately respond to a request for comment.

The US and other major agricultural exporters fundamentally oppose India's request to stock up unlimited reserves of subsidized crops and then dump them on global markets.

This view is backed by the politically influential US farm lobby, which argues that India's plan would distort trade flows in ways that may actually increase global food insecurity.

"It has been our long-standing position that market price support systems for food security don't work," said US Ambassador to the WTO Maria Pagan.

"Every time we open up a conversation about agriculture we end up talking about public stockholding as if it's the only thing," Pagan told Bloomberg in an interview. "That is simply not the case. There is no pre-ordained permanent solution."