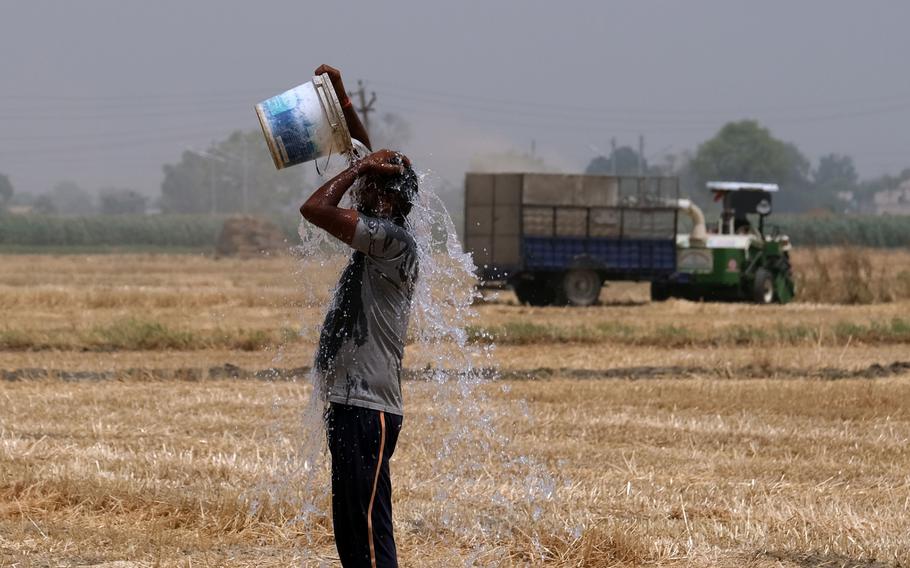 A farmer pours water on himself while working at a wheat farm in the Ludhiana district of Punjab, India, on May 1, 2022. (T. Narayan/Bloomberg)

A blistering heat wave has scorched wheat fields in India, reducing yields in the second-biggest grower and damping expectations for exports that the world is relying on to alleviate a global shortage.

Temperatures soared in March to the highest ever for the month on record going back to 1901, shriveling India's wheat crop during a crucial growth period. That's spurring estimates that yields have slumped 10% to 50% this season, according to almost two dozen farmers and local government officials surveyed by Bloomberg.

This could be a serious blow to global wheat supplies after Russia's war in Ukraine upended trade flows out of the critical Black Sea breadbasket region, prompting warnings of food shortages. Importing nations are looking to India for supplies, with the first shipment being prepared for top buyer Egypt. Lower production would jeopardize India's ability to make up for the shortfall. 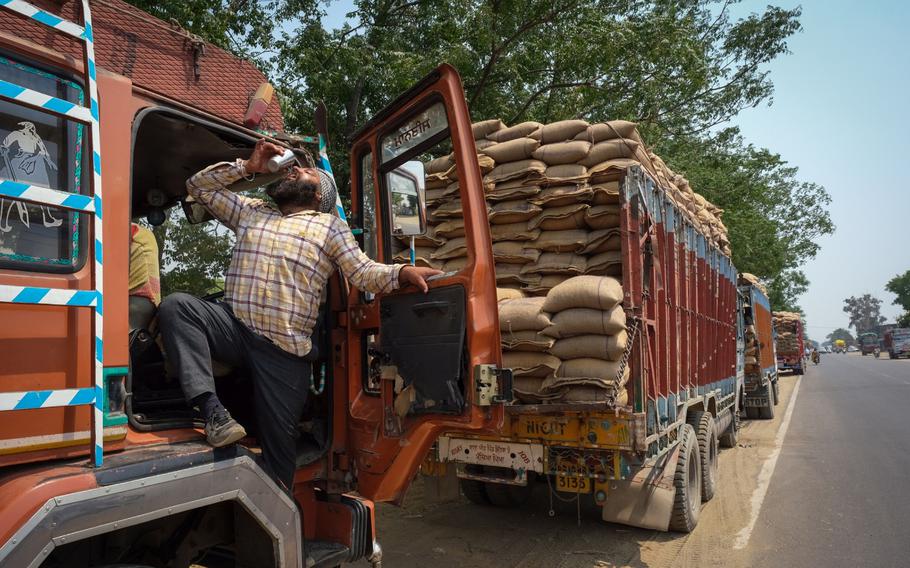 A truck driver loaded with wheat sacks drinks water at the grain market in Khanna district of Punjab, India, on April 30, 2022. MUST CREDIT: Bloomberg photo by T. Narayan (T. Narayan)

The food and commerce minister predicted that India will export as much as 15 million tons of wheat this fiscal year, a record high and double what it shipped last year. The scorching heat has thrown that into doubt.

It's also raising concerns for the domestic market, with millions depending on farming as their main livelihood and food source. Weaker production will lead to a drop in farmers' income, squeezing margins just as costs of fertilizer and fuel have soared. The government also buys wheat for its food aid program.

Ajay Vir Jakhar, chairman of Bharat Krishak Samaj, an association of farmers, expects yields to drop by an average of 15% across India due to the heat. Another wheat grower, Manish Tokas, said output at his 21-acre farm in Haryana shrank by a third. He plans to hold on to his crop for a few months in anticipation that local prices will rise, helping to offset lower production.

Wheat is very sensitive to heat. High temperatures in March shortened the important grain filling period, reducing the weight of the crop, according to K.K. Singh, head of the agromet division at India Meteorological Department.

He said Indian farmers should sow wheat early as the intensity and frequency of hot weather will increase in the coming years. They should also start to grow some heat-tolerant varieties, according to Singh. Wheat was sown late this season, contributing to the lower yields.

India recorded an average maximum temperature of 91.6 degrees Fahrenheit in March, an all-time high. In April, temperatures surged to 115 F in some places. No respite is likely in the coming days.

Farmer Puneet Singh Thind in Punjab — known as the country's food bowl — said output at his 18-acre farm has slumped 40% compared with normal seasons, mainly due to heavy rains previously and the heat wave conditions in March. He's had to incur extra costs to deal with the erratic weather, such as draining excess water from the fields.

Farmers are at the mercy of Mother Nature, Thind said. "No one can guarantee the weather. It's like gambling for us."