Okinawa police say a Marine was killed Saturday, May 14, 2022, after the car he was driving veered off Route 58 and crashed into a light pole and pedestrian fence outside Camp Foster, Okinawa. (Frank Andrews/Stars and Stripes)

The four collisions took place on a stretch of Route 58 in Chatan that an Okinawa highway spokesman said is among the most dangerous in the prefecture.

The site is “one of the top five accident-prone spots” on Okinawa, a spokesman for the South National Highways Office told Stars and Stripes on Tuesday.

“It is of the places on the island where accidents frequently occur,” Okinawa police said Monday. “The road looks straight, but it isn’t.”

Most recently, a car driven by “a person related to the U.S. military” collided with a local taxi around 1 a.m. Sunday, a spokesman for the Okinawa Police Station told Stars and Stripes by phone Tuesday. Police suspect the individual of drunken driving but did not make an arrest, the spokesman said.

A Marine with the 3rd Maintenance Battalion, 3rd Marine Logistics Group, headquartered at Camp Kinser, was involved in a collision around that time, spokeswoman LaDonna Davis of Marine Corps Installations Pacific told Stars and Stripes by email Wednesday. She provided no further information, citing an ongoing investigation.

The driver cooperated with the investigation and the Okinawa police “did not take this person into custody,” the police spokesman said. Government spokespeople in Japan customarily speak to the media on condition of anonymity. 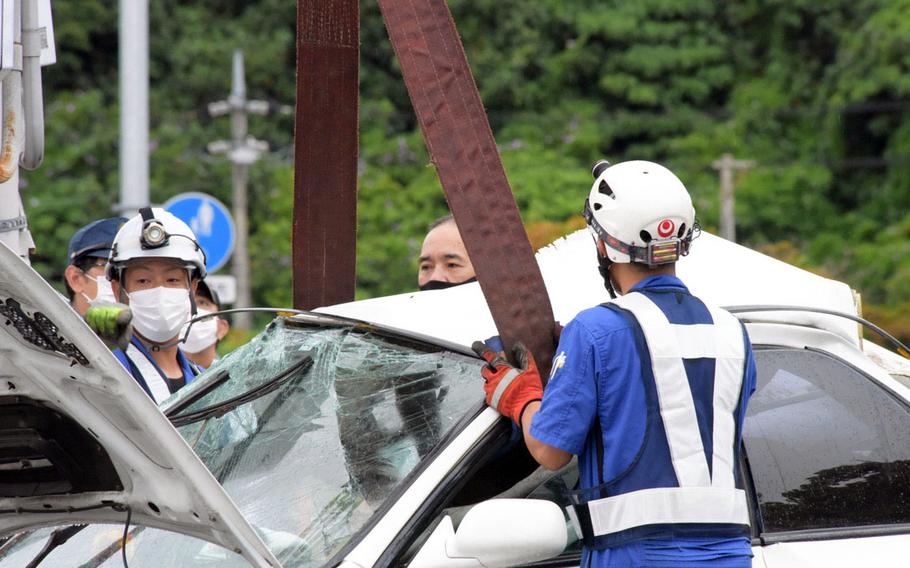 Okinawa police say a Marine was killed Saturday, May 14, 2022, after the car he was driving veered off Route 58 and crashed into a light pole and pedestrian fence outside Camp Foster, Okinawa. (Frank Andrews/Stars and Stripes)

The taxi driver, a man in his 60s, was treated for neck and shoulder pain at a local hospital, the Okinawa Times reported Tuesday.

Early Saturday, a Marine corporal whom the service has yet to identify was killed in the same area. His car veered off the highway around 4:50 a.m. and struck a light pole and a pedestrian fence, police said. He was declared dead at 6:14 a.m. at U.S. Naval Hospital Okinawa.

Around 5 p.m. that day, a vehicle bearing a Y plate, which designates it is registered to someone affiliated with the U.S. military, crashed into the center median, an Okinawa police spokesman told Stars and Stripes by phone Monday. No further information was available on that incident, which took place about 80 yards north of the fatal accident scene.

On May 8, a vehicle driven by a Marine left the roadway at nearly the same site, continued onto the sidewalk and killed a 61-year-old pedestrian. Police questioned but did not detain Lance Cpl. Joshua David Siegel. Alcohol was not a factor in the crash, police said.

A “wet road surface” is one reason for the series of accidents, according to the police spokesman. “Please be careful when driving, especially during the rainy season,” he said.

The highway office has been applying a non-slip finish to Route 58 around Chatan crossing since 2009 and plans this fiscal year to extend those improvements to the area where the recent accidents occurred, the highway office spokesman said.

“We are working on the improvement of the road condition, but I would like to request drivers continue to be careful and do their part to prevent these accidents,” he said.