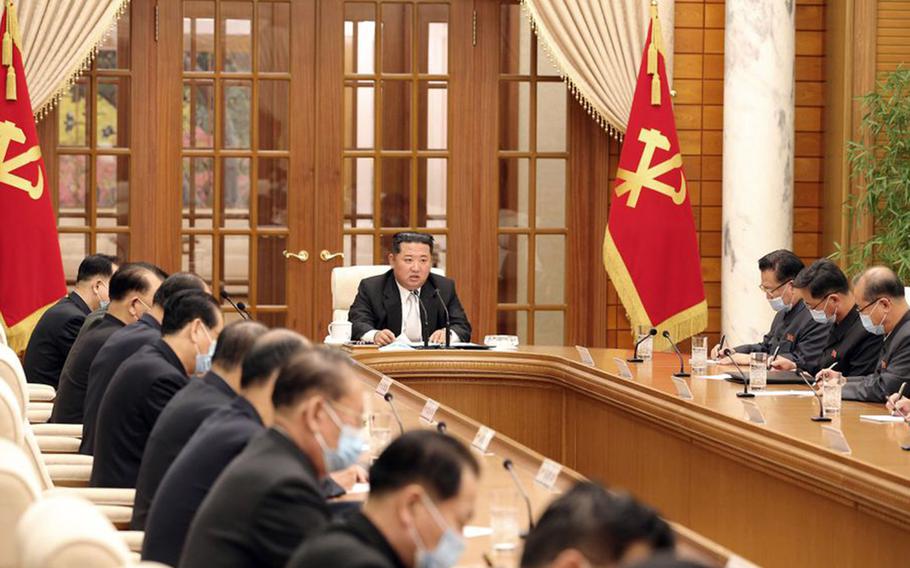 North Korean leader Kim Jong Un holds a meeting on the coronavirus in this undated image released by the state-run Korean Central News Agency on May 12, 2022. (KCNA)

CAMP HUMPHREYS, South Korea — North Korea for the first time has confirmed there are COVID-19 infections within its borders and said it is facing a “grave” situation due to an outbreak.

The state-run Korean Central News Agency reported Thursday that the North has implemented the “largest scale epidemic prevention and control system” upon the discovery of the coronavirus respiratory disease’s omicron variant.

The news agency did not provide case counts or fatality rates in its report but said North Korean leader Kim Jong Un had ordered a “lock down” of all cities and their combined population of roughly 25 million people.

Pyongyang’s decision to confirm COVID-19 infections in the country comes two years after South Korea reported its first cases. Previously, the North did not report a single infection and released updated case numbers for other nations.

In 2021, North Korea rejected nearly three million doses of the Chinese-produced Sinovac Biotech vaccine from UNICEF, saying they would be needed elsewhere. The North is part of the COVID-19 Vaccine Global Access plan, or COVAX, that provides vaccines to impoverished countries.

While North Korea imposes strict limits on access beyond its borders, it allows humanitarian aid groups, such as the World Health Organization, to operate inside the country.

Meanwhile, South Korea’s Korea Disease Control and Prevention Agency reported 35,906 new COVID-19 cases in its population of 51 million people on Wednesday. Seoul dropped its mask mandate and a host of other social distancing requirements in May. The country’s one-day record is 621,187 cases on March 1.

U.S. Forces Korea, the command responsible for about 28,500 troops in the country, counted 98 cases from the week ending Monday. The U.S. military also dropped much of its social distancing restrictions for its forces across the country as over 98% of its personnel is vaccinated.