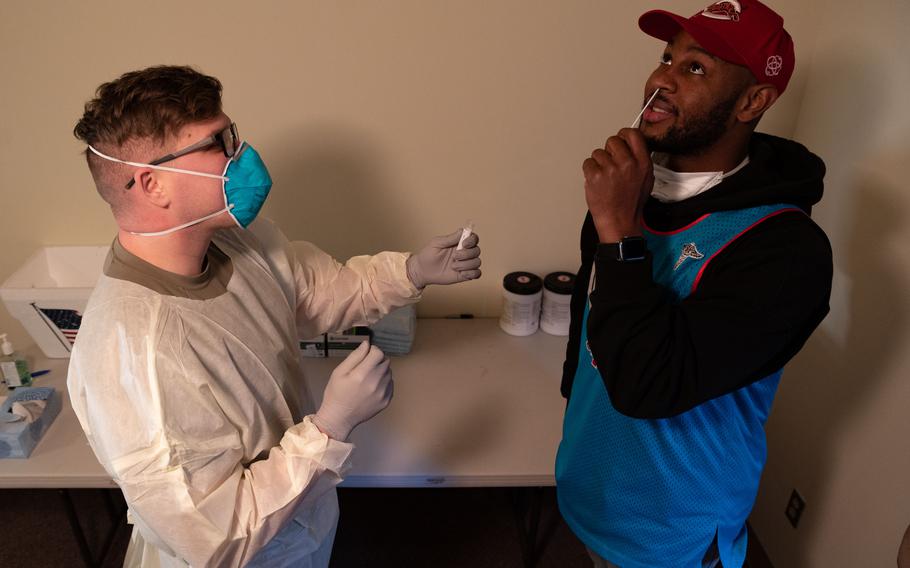 An airman demonstrates how to properly swab a nose for a COVID-19 antigen test earlier this year at Osan Air Base, South Korea. (Megan Estrada/U.S. Air Force)

U.S. Forces Korea, responsible for roughly 28,500 troops, reported 146 new infections during the week ending Monday, according to an update on its website. The command counted 252 cases in the week ending April 25.

The latest figure represents a significant drop from a seven-day high of 1,599 cases reported on Jan. 10 and is the lowest caseload since Feb. 21, when the command reported 119.

USFK gradually loosened social-distancing requirements for its forces starting in March, after it did away with a seven-day mandatory quarantine for fully vaccinated new arrivals.

The command went on to lower its health protection condition in April and allowed its fully vaccinated affiliates to enjoy a wider range of off-post activities, including karaoke bars and clubs. It went on to lift its mask mandate on all installations in the same month, although individual commanders still have the discretion to require them in indoor areas.

At Camp Humphreys, the largest U.S. military base overseas, service members were widely seen without masks on Wednesday.

USFK’s policy changes coincided with the South Korean government lifting its own social-distancing restrictions. Last month, the Korea Disease Control and Prevention Agency did away with a business curfew and a 10-person limit to public gatherings.

In one of its most noticeable changes yet, the government on Monday lifted its outdoor mask mandate for the first time since it became law in October 2020. South Koreans have been one of the first countries to implement a mask mandate and imposed fines for those caught without one in public.

South Korea reported 42,296 new daily COVID-19 cases on Wednesday, down from the 57,464 infections a week prior, according to KDCA. The majority of the new cases, 10,242, stemmed from Gyeonggi, the country’s most populous province and the home of Humphreys and Osan Air Base, followed by Seoul, the capital city, with 6,645 cases.

Vaccination rates in South Korea remain mostly unchanged since the previous week — nearly 88% of the country’s population of 51 million people received the first dose of a COVID-19 vaccine and almost 65% received a vaccine booster shot, the KDCA said in an update on Thursday.