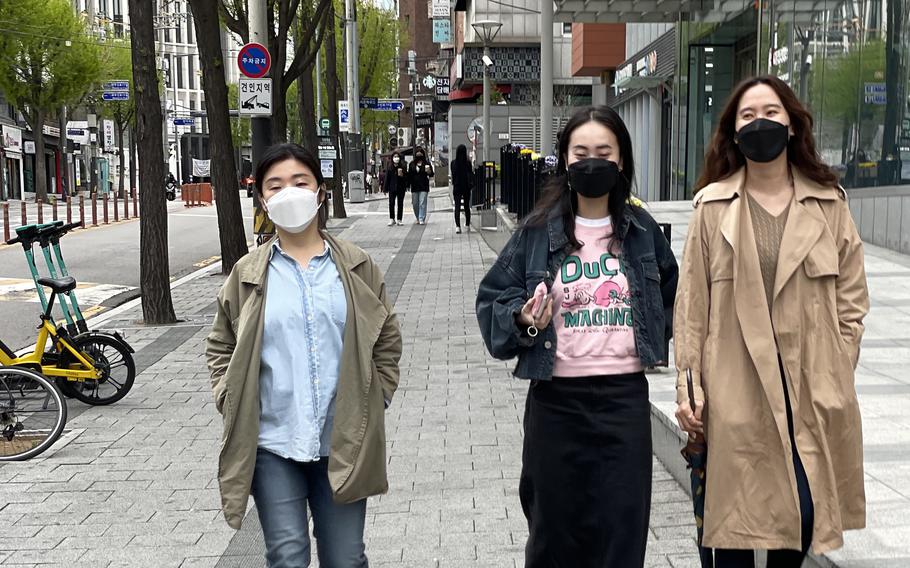 CAMP HUMPHREYS, South Korea – The U.S. military command in South Korea will lower its health protection condition in time for its population to sample a wider variety of off-base activities this weekend.

U.S. Forces Korea will move from Bravo-plus to Bravo at 6 a.m. Thursday, the command announced Wednesday in a news release. The change will allow those who are fully vaccinated to visit bars, clubs, adults-only establishments, saunas and karaoke bars.

A person is considered fully vaccinated 14 days after completing a vaccination series approved by the Food and Drug Administration, according to USFK.

Masks are still required of everyone in South Korea, indoors and outdoors; USFK requires masks indoors but not outdoors on U.S. military installations.

“USFK will continue to monitor and assess the COVID-19 environment and will make additional adjustments to protect the force and our mission,” the new release said.

USFK on Jan. 8 imposed Bravo-plus, which banned off-base activities such as indoor dining and visits to outdoor venues and restricted travel to Seoul to official business only.

The command eased those restrictions through February and March as South Korea loosened its own social-distancing regulations.

USFK on Monday counted its third consecutive week of declining COVID-19 cases. The command reported 326 new infections in the seven-day period ending Monday, down from 524 cases in the previous period.

South Korea reported 111,319 new COVID-19 cases on Tuesday, according to the Korea Disease Control and Prevention Agency update on Wednesday. The April one-day high, thus far, is 286,294 new cases on April 5. The one-day record is 621,187 new cases on March 17.

South Korea did away with a host of restrictions on Monday, including business curfews, a 10-person cap on gatherings and the mandatory, seven-day quarantine for those who test positive for COVID-19.

The coronavirus has held on stubbornly in Japan, infecting between 24,000 and 57,000 per day since April 1.

However, the seven-day rolling average of new cases dropped below 40,000 per day on Tuesday for the first time since late March. Tuesday’s average was 37,924, the lowest it’s been since 39,737 on March 25, according to the Johns Hopkins Coronavirus Resource Center.

Okinawa prefecture, however, continues to battle a high number of infections, according to the prefectural Department of Public Health and Medical Care. The department reported 1,547 new cases Wednesday, and an additional 57 cases within the U.S. military population.

The prefecture is “strongly concerned” with the spread of COVID-19 among its population of elderly and children, a departmental spokesman told Stars and Stripes by phone on Wednesday. Japanese government spokespeople customarily speak to the media on condition of anonymity.

The department is promoting PCR tests at schools and daycares and strengthening its support to elderly care facilities, the spokesman said. Also, “we are trying to get more people to receive the booster shots,” he said.