Biggest military buildup in decades may not save Australia PM

Standing in front of a camouflaged tank this month shortly before kicking off Australia's election campaign, Prime Minister Scott Morrison touted his record on an issue that conservative leaders have long seen as an advantage at the polls.

His government was "investing in the strength and security of our nation" during "a very uncertain time," Morrison said at the ground-breaking ceremony of a factory to build howitzer artillery vehicles outside of Melbourne. He claimed the opposition Labor party had previously opposed construction of the weaponry, suggesting they shouldn't be trusted on national security issues.

"We said we would get this done when others walked away," Morrison said. "We are getting it done."

Along with the economy and immigration, national security is one of the major issues that the ruling Liberal-National coalition — in power since 2013 — falls back on in times of trouble. Prior to the campaign, government advisers saw the geopolitical volatility in the wake of Russia's war in Ukraine as helping him pull off another come-from-behind victory.

But while the latest national polls show the race narrowing, there's also evidence that national security is no longer a major advantage for Morrison. In March voters surveyed said both Labor and the Coalition were equally capable of dealing the Ukraine crisis, while a February poll found Labor was considered more capable of handling the relationship with China.

What's more, a poll in November showed the government's edge over the Labor party on national security had narrowed to six percentage points — down from 16 prior to his "miracle" election win in 2019.

Other polling shows the Australian public is a lot more focused on economic issues and climate change. Despite strong economic growth and an unemployment rate at 4%, Morrison is facing criticism over slow wage growth and rising cost-of-living that could soon spur the central bank to raise its key interest rate for the first time since 2010.

"In terms of ordinary voters, I think that they are much more concerned about more close to home issues, especially things like cost of living," said Michelle Grattan, a longtime political observer and a professorial fellow at the University of Canberra.

In some ways, Morrison has lots to boast about.

He's currently overseeing one of Australia's largest military buildups since the end of the Vietnam War, with spending as a percentage of gross domestic product at its highest in almost 30 years. He reached the AUKUS partnership with the U.S. and the U.K. that could see Australia field a fleet of nuclear-powered submarines by 2030, and invigorated the Quad grouping that includes America, Japan and India.

Since January, Morrison and his Defense Minister Peter Dutton have announced a new A$10 billion ($7.5 billion) submarine base on the country's east coast, A$9.9 billion for a new cyberwarfare center and A$38 billion to increase Australia's troop numbers by a third by 2040. That's in addition to domestic missile construction and purchases of tanks from the U.S.

But he's also had some stumbles. The AUKUS agreement tarnished relations with France and scuttled a lucrative submarine contract, while recent reports in local media have also highlighted expensive problems with new frigates and armored vehicles — potentially blowing out the cost of the projects while slowing down their delivery.

The Coalition's track record of trying to deliver a new fleet of submarines has been the "biggest procurement disaster in defense history," Peter Dean, director of the Defense and Security Institute at the University of Western Australia, wrote in an opinion piece last month.

Just this week, Morrison saw another setback when the Solomon Islands signed a security pact with China, potentially giving Beijing's military a landing spot close to Australia's shores. The deal was clinched shortly after one of his ministers visited the island and urged the Pacific nation to rethink the agreement.

"Australia has been the security partner of choice for the Pacific for a long period of time, for the entire post World War II period," opposition leader Anthony Albanese said on Wednesday. "That's broken down. We need to repair it."

The Solomon Islands in particular shows how Australia's diplomatic footprint is "in a sad state of disrepair," according to John Blaxland, a former Australian intelligence officer who is now professor of International Security & Intelligence Studies at the Australian National University. Moreover, he added, the government has room to improve how it spends money on defense. 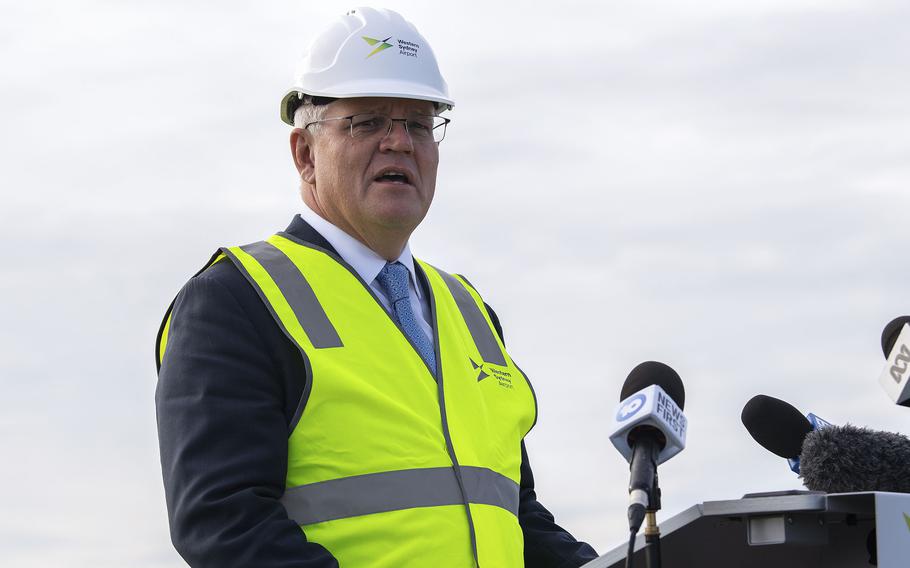