US threat to sanction China rattles other Asian nations 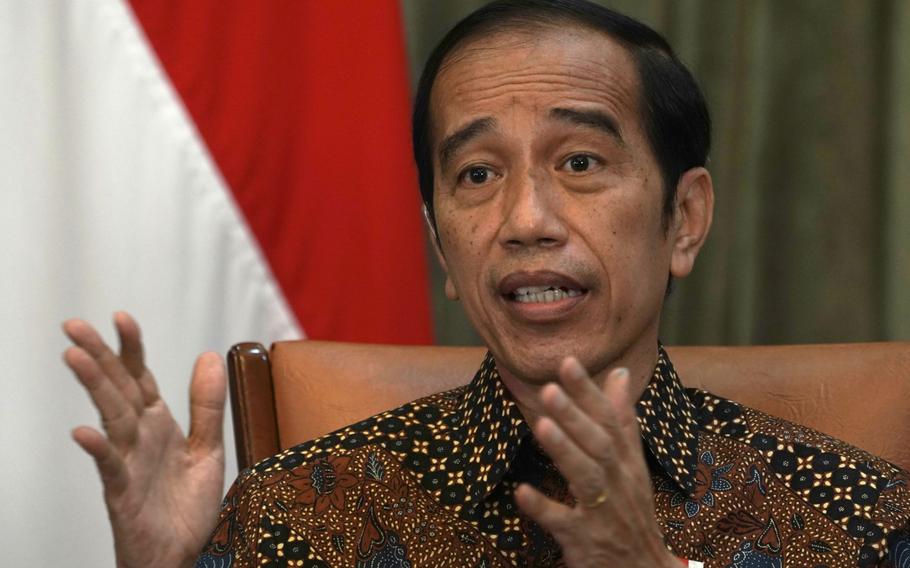 Joko Widodo, Indonesia’s president, gestures as he speaks during an interview at Presidential Palace in Jakarta, Indonesia, on April 7, 2021. (Dimas Ardian/Bloomberg)

Southeast Asia will host two meetings later this year -- the Group of 20 summit and the Asia-Pacific Economic Cooperation forum, or APEC -- that would normally bring Biden, Putin and Chinese leader Xi Jinping under one roof. And the two countries set to host them -- Indonesia and Thailand -- are starting to worry about getting caught in the middle, even though the summits are months away and it isn’t even clear if Putin would turn up.

Indonesian Foreign Minister Retno Marsudi has privately expressed concern about the U.S. threats of secondary sanctions against China because leaders in Jakarta see Beijing’s stance on the war as neutral, according to a person familiar with the situation, who asked not to be identified.

While Indonesia is planning to welcome Russia to the G-20 summit, the person said, leaders in Southeast Asia’s biggest economy are concerned the U.S. will increase pressure to abandon the country’s non-aligned policy. Indonesia wants to keep the agenda limited to economic policies, global health and climate change, the person added.

Thailand is also concerned that it will be forced to pick sides if the U.S. and its allies boycott the APEC summit over Russia’s involvement, according to the Nation newspaper. The report citing the Royal Thai Armed Forces Security Centre -- an intelligence unit of the country’s military -- noted Russia had blacklisted eight APEC members and warned of more sanctions on member economies if the war drags on.

The uncertainty underscores the risk that the war in Ukraine will accelerate fissures in the global economy centered on national security risks over supply chains, advanced technology and the personal data of millions of citizens. Although the U.S. has yet to specify what business activity with Russia would trigger secondary sanctions, the frequent use of such measures against China in the past few years poses a significant risk for exporting nations reliant on the U.S. and European markets.

“Even before the invasion of Ukraine, the multilateral world order was already under considerable strain from the strategic tensions between the big powers,” Singapore Deputy Prime Minister Heng Swee Keat said during a conference on Tuesday. “The current crisis will further accentuate these rifts, and pose a grave threat to the international rule of law.”

Russia was expelled from the Group of Eight in 2014 following Putin’s annexation of Crimea, which came after the toppling of Ukraine’s Kremlin-backed leadership. Still, it would be much harder to boot out Russia from the G-20 or APEC, which have many more members including China, one of Putin’s main diplomatic supporters.

Preparations for the APEC summit in November are still in the early stages, according to Tanee Sangrat, a spokesperson for Thailand’s Foreign Ministry. “We have not been pressured to keep any topic out of the discussion at the summit this year,” he said when asked about the report. A Defense Ministry spokesman declined to comment.

Teuku Faizasyah, a spokesman at Indonesia’s Foreign Ministry, said he wasn’t in a position to confirm the discussions involving Marsudi while adding that Indonesia hasn’t experienced any such pressure yet. But, he added, “we are indeed concerned with the prospect of the conflict to divert the G-20’s focus and cooperation away from economy and development.”

During a call last week with Marsudi, Chinese Foreign Minister Wang Yi denounced the use of unilateral sanctions and called on Indonesia to use its G-20 presidency to remove “disruptions.” He also said the region should prevent “confrontation between blocs” and avoid allowing “small and medium-sized countries to be used as tools for confrontation between major powers,” according to a Chinese statement.

Marsudi simply called the conversation with Wang a “good phone call,” without elaborating. Indonesia hasn’t directly criticized Moscow even though President Joko Widodo tweeted out “Stop the war” immediately after the invasion, and his government supported a draft United Nations resolution demanding Russia withdraw forces. While Russia accounts for only a small amount of Indonesia trade, state-owned energy company PT Pertamina has a joint venture with Rosneft to build a $13.5 billion refinery.

Other countries in the region are in a similar predicament. While Russia made up less than 1% of global trade with Southeast Asia in 2020 and even less in foreign investment, nations may be reluctant to cuts ties with its largest source of arms: Russia accounted for more than a quarter of the region’s weapons in the two decades to 2020.

“A few parties might be circumspect in their criticism of Russia or unable to sever economic ties with Moscow, especially India and Vietnam, who remain overwhelmingly reliant on Russian arms,” said Greg Poling, director of the South-east Asia Programme and Asia Maritime Transparency Initiative at the Centre for Strategic and International Studies in Washington. “The administration understands that some partners are in a difficult position on this issue and is unlikely to hammer them for it.”

India is the most notable example, relying on Russia for most of its weapons. While Biden called India’s response to Putin “shaky,” officials in New Delhi are confident they won’t face sanctions because the U.S. still views it as important partner in countering China.

While the threat of U.S. sanctions has prompted Southeast Asian nations like Indonesia and the Philippines to avoid purchasing some Russian military hardware, all the major powers must still tread carefully in dealing with the region, said Ian Storey, senior fellow at ISEAS-Yusof Ishak Institute.

“Southeast Asian countries are not without agency, and their stances they adopt towards the conflict will be based on their national interests and foreign policy outlooks,” he said. “Overt pressure from Washington, Beijing or Moscow to pick sides will likely backfire.”