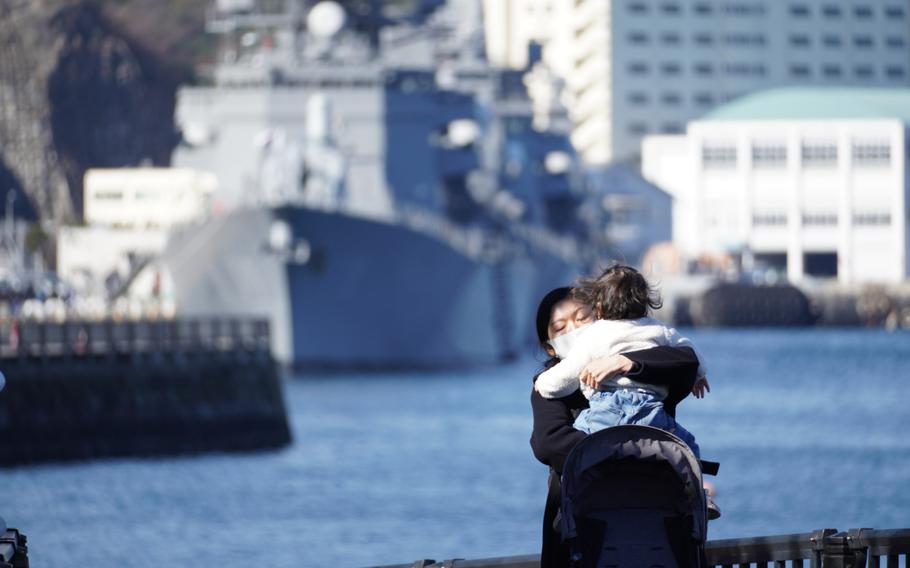 TOKYO — Masks came off at more U.S. military installations across Japan on Tuesday, a day after the overarching U.S. military authority approved easing that part of pandemic life.

Misawa Air Base in northeastern Japan, Sasebo Naval Base on the southern island of Kyushu, and Yokosuka Naval Base, the homeport of the U.S. 7th Fleet south of Tokyo, updated their public health orders to reflect masks are no longer required on those installations, indoors or outdoors, regardless of an individual’s vaccination status.

Yokota Air Base in western Tokyo and Kadena Air Base and Marine Corps bases on Okinawa lowered their mask requirements on Monday.

Some exceptions apply, including medical and dental facilities and Air Mobility Command terminals. Tenant organizations may require masks inside their facilities. Yokosuka, for example, requires masks at child and youth programs.

Most commands also warned against harassing individuals who choose to or must wear masks.

Some people are required to mask up because they have contracted COVID-19, were exposed to someone with the disease or have symptoms of it. Others may be immunocompromised or simply choose to wear a mask.

Masks are required off base of anyone in Japan under the status of forces agreement, according to an order updated Monday by U.S. Forces Japan.

USFJ lowered the mask requirement because the rate of new COVID-19 cases and hospitalizations has fallen to a community level considered low or medium by the Centers for Disease Control and Prevention, according to a command statement emailed Stars and Stripes on Monday.

New COVID-19 cases in Tokyo fell to 4,836 on Monday, the lowest one-day count there since 4,172 on Jan. 16. On Tuesday, the city reported 7,836 people tested positive for the virus, according to public broadcaster NHK.

Japan on Monday reported 32,359 new COVID-19 infections, the lowest it’s reported since 37,002 on March 7, according to the Johns Hopkins Coronavirus Resource Center. Another 116 people died Monday of complications of the disease.

USFJ on Monday reported 73 new COVID-19 cases at 13 installations over the previous 24 hours. The command last reported 99 infections as of Thursday. None of those cases are considered serious or are hospitalized.

Yokosuka Naval Base accounted for 12 in USFJ’s Monday update. Misawa Air Base had nine.

Kadena Air Base, which dropped its mask mandate, with some exceptions, on Monday, reported 114 total cases there, according to an update on its website the same day.

Okinawa prefecture, where Kadena and the bulk of III Marine Expeditionary Force are located, reported 832 new cases Monday and Tuesday, along with 52 in the U.S. military population on the island, according to the prefectural Department of Public Health and Medical Care.