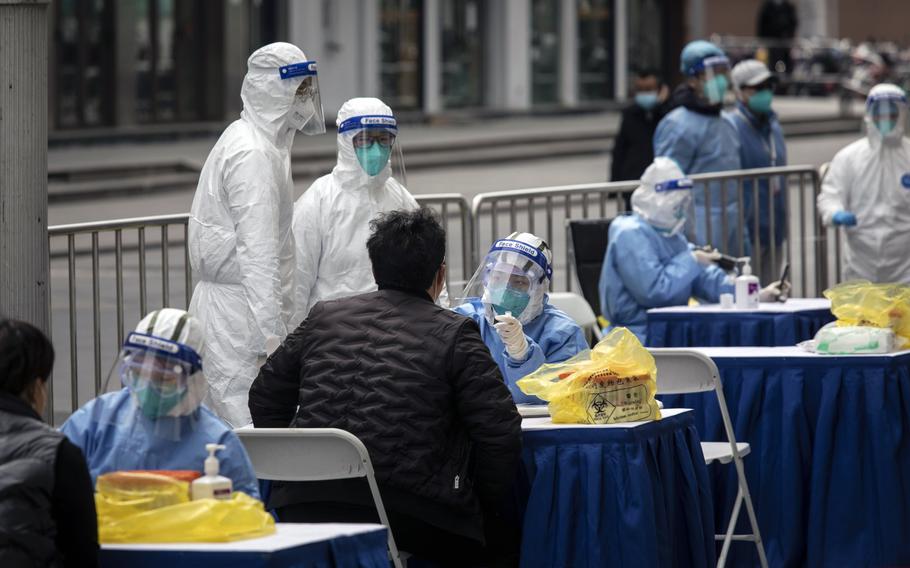 Health workers tests for COVID outside of a clothing market in Shanghai on March 10 2022. (Qilai Shen/Bloomberg)

China is experiencing its most significant COVID-19 outbreak since the early days of the pandemic, igniting a flurry of new restrictions and mitigation measures as the country’s zero-tolerance approach to the virus is challenged like never before.

Domestic infections topped 1,000 for the first time since the peak of the original Wuhan outbreak on Friday, a tally that has ballooned from just over 300 cases a day in less than a week.

The country responded by locking down a city of 9 million people in the northeast and ordering the construction of makeshift hospitals there and in the eastern port city of Qingdao. An outbreak of the omicron variant in Shanghai saw schools in there shuttered again, while officials are said to be looking at diverting all international flights away from the financial center to ease pressure on quarantine hotels. China isolates all virus cases, including those in the community, as part of its COVID Zero policy.

In a move that may signal Beijing is expecting a further spike in cases, authorities said they would allow the use of rapid antigen tests for the first time late Friday. While used widely in other parts of the world, rapid tests were previously restricted in China.

The COVID Zero strategy that helped keep the world’s second-largest economy largely virus-free for much of the pandemic now appears to be buckling as the more transmissible omicron variant repeatedly breaks its stringent containment regime. COVID’s spread in the nation’s biggest cities also makes it difficult to deploy the aggressive but disruptive restrictions officials are increasingly turning to to rein in cases, chief among them lockdowns.

An outbreak in the northeastern province of Jilin — which borders Russia and North Korea — saw the capital Changchun put into a lockdown on Friday, with residents asked to stay home while the city conducts three rounds of mass testing. Authorities are moving quickly to build three makeshift hospitals with a capacity for some 1,200 beds.

China famously erected a number of temporary hospitals in Wuhan in 2020, some built in as little as 10 days and then used to treat moderate and severe patients. China’s policy is still to isolate all cases of COVID, regardless of severity, to contain further spread.

That approach will be maintained, according to a person familiar with the country’s plans, and other places that are experiencing strong outbreaks should consider building temporary hospitals, especially to isolate cases with no symptoms. That would leave actual hospitals designated to deal with COVID free for the more severe infections.

Qingdao is also building multiple makeshift hospitals amid omicron’s explosive spread in a number of schools. Local officials and school heads there have received disciplinary warnings for failing to tame the outbreak.

In Shanghai, students up to middle school will return to remote learning from Saturday. China’s aviation authority has asked airlines to nominate alternative ports of arrival for international flights into the city, according to people familiar with the matter, asking not to be named as the discussions were confidential. Officials cited stretched capacity at the quarantine hotels all travelers into China are required to isolate in, and concerns that space may be needed if the outbreak in Shanghai worsens.

While authorities in Shanghai have largely refrained from deploying the sweeping curbs commonly used in smaller cities — such as lockdowns — the growing outbreak there may test the limits of this more targeted response.

Just two of the 75 COVID cases reported in the city Friday were in the community, which may explain why authorities haven’t deployed city-wide testing as yet. Bigger cities with sophisticated contact-tracing capacity won’t necessarily mass test as long as the outbreak is considered to be limited and under control, the person familiar with China’s response said. Most of the newly reported infections in Shanghai are among those who have already been isolated, for being a close contact of a case, for example, according to the person.

Despite the swelling outbreak, China is seeing more people infected without obvious symptoms than those who are sickened by the virus — likely resulting from omicron’s diminished virulence and China’s mass vaccination drive that’s seen nearly 90% of its 1.4 billion people fully inoculated with locally-developed shots and more than one-third boosted. Of Friday’s total caseload, 703 were asymptomatic.

Beijing recently pledged it would be sticking to COVID Zero, even as other parts of the world dismantle pandemic curbs and open up — leaving China isolated. Still, there are signs the country’s health officials and experts are at least considering how they may exit the approach and live with the virus as endemic.

China approved the antiviral pill Paxlovid developed by Pfizer Inc. last month, a move seen by many as evidence of that planning. The introduction of at-home rapid tests may also be a sign, with other countries shifting toward use of rapid tests when their lab testing systems were overwhelmed by broader circulation of the virus.

That said, any shift will be slow and unlikely to occur before 2023, given the need for stability in a politically important year for President Xi Jinping, people familiar with China’s thinking have told Bloomberg News.

Chinese Premier Li Keqiang said Friday that the world should be working more closely together to create the conditions for a return to normal life post-pandemic. In a press conference marking the end of the annual National People’s Congress in Beijing, he said officials will work to make China’s response more scientific and targeted, and to maintain the normal functioning of everyday life and supply chains.