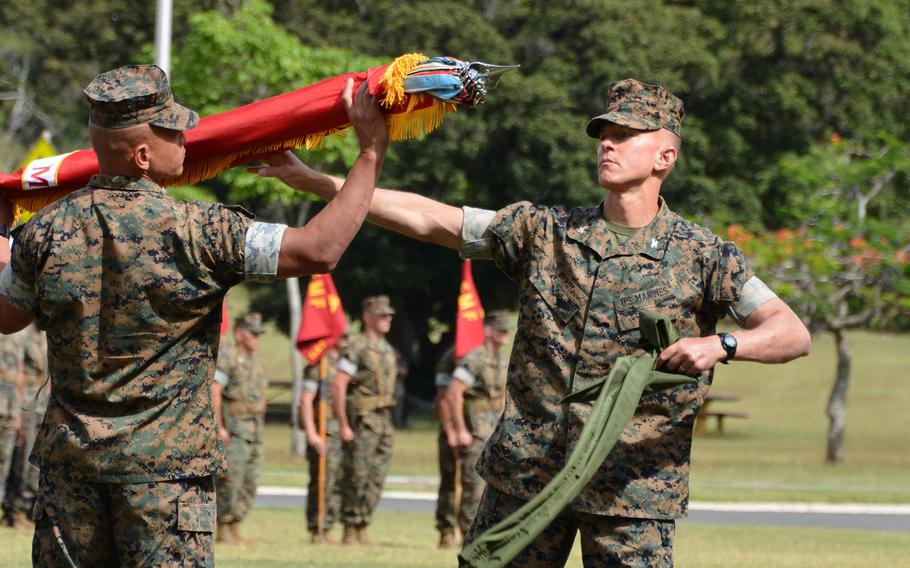 Marines uncase the colors of 3rd Marine Littoral Regiment during a ceremony at Marine Corps Base Hawaii, Thursday, March 3, 2022. (Wyatt Olson/Stars and Stripes)

MARINE CORPS BASE HAWAII – The Marine Corps on Thursday cased the colors of a regiment that traces its lineage to World War I, then redesignated it as a unit specializing in expeditionary warfare with an eye on China.

In a ceremony abounding with pomp and parading at Marine Corps Base Hawaii, 3rd Marine Regiment was redesignated 3rd Marine Littoral Regiment, an evolution at the heart of the Marine Corps’ Force Design 2030 modernization effort.

“We have to modernize and adapt to be successful in the operating environment of the future where adversaries’ technologies and capabilities will certainly continue to advance,” he said. Brady and fellow keynote speaker Gen. Eric Smith, the assistant commandant of the Marine Corps, touted the capabilities that the littoral regiment is expected to attain in full as it continues to evolve over the next couple years.

“The [littoral regiment] will be optimized for conducting expeditionary advanced base operations in support of the joint force and with our allies and partners in contested, austere and distributed maritime environments,” Brady said.

“It will support our ability to seize and defend key maritime terrain,” he said. “It will integrate with and expand joint networks and sensors in command-and-control capabilities. It will support maritime domain awareness and provide long-range precision fires in support of naval operations.”

The concept behind the littoral regiment “brings with it a purpose-built formation ready to deploy and fight tonight,” Smith said.

“The Marines you see standing before you form the 3rd Marine Littoral Regiment,” Smith said, motioning to the hundreds of troops standing in formation on Dewey Field as part of the ceremony. “They're willing to put down their lives for you.” 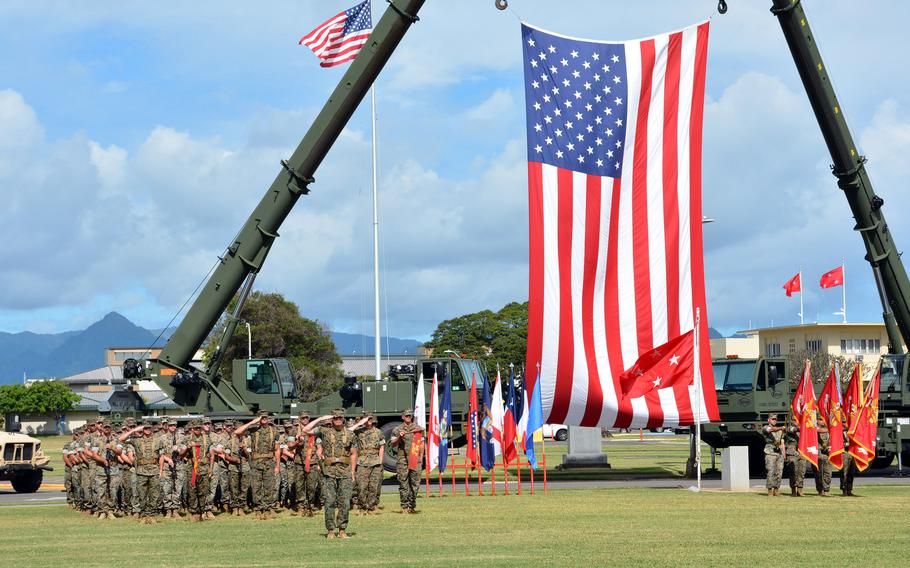 The 3rd Littoral Regiment is the first of three regiments the Marine Corps plans to form in the Pacific and are “specialized to deal with the rising threat of China,” Smith told reporters during a conference call Monday.

While they extolled the future of the redesignated regiment, both speakers lauded the history upon which the littoral regiment builds.

“Please don't ever mistake change for walking away from our roots,” Smith said. “That's not happening. Everything transfers from the 3rd Marines.”

The regiment was activated in 1916 and participated in the occupation of the Dominican Republic during World War I.

During World War II, the regiment fought in campaigns in Bougainville, the Solomon Islands, Guam and Iwo Jima.

Its Marines were deployed for the Vietnam War and the wars in Afghanistan and Iraq.

The new regiment will carry forward its predecessor’s call sign, Bougainville, and its Latin slogan “Fortes fortuna juvat,” which the previous regiment translated as “Fortune favors the brave.”

The littoral regiment uses an alternative English translation of the phrase: “Fortune favors the bold.”