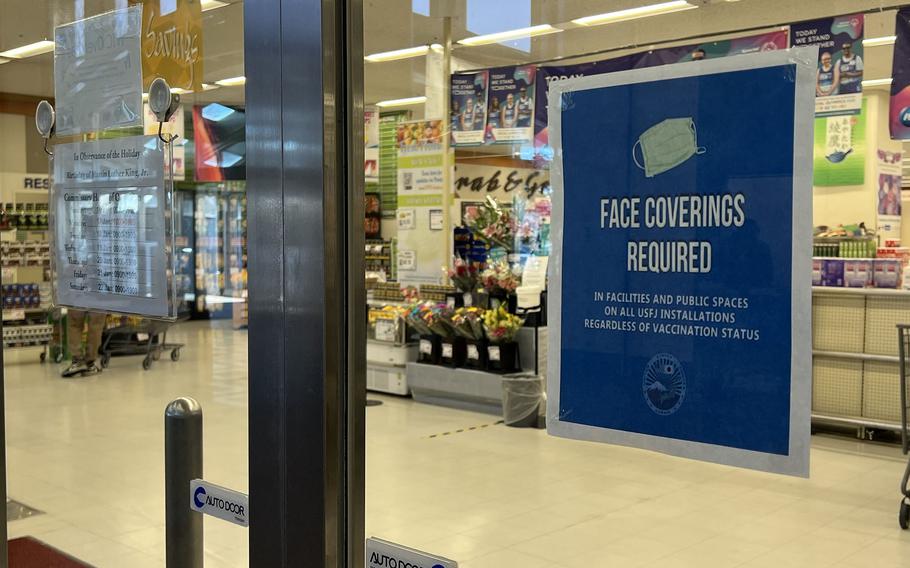 Tokyo confirmed 12,693 new infections Wednesday, 880 more than the previous day but 1,874 less than Feb. 23, according to public broadcaster NHK and metropolitan government data.

Another 31 people in Tokyo died of causes related to COVID-19, NHK reported.

U.S. Forces Japan on Tuesday evening reported 82 new COVID-19 cases, including three awaiting confirmation, at 10 installations over the previous 24 hours. None are hospitalized or considered serious, according to the command’s daily update. USFJ last reported 102 new cases on Friday.

USFJ on Tuesday followed the government of Japan’s lead and relaxed the quarantine period to three days for new arrivals or travelers returning to Japan, provided they are fully vaccinated, including a booster shot, and test negative three times – prior to arrival, at the airport and three days later.

USFJ also relaxed the mask mandate on U.S. military installations for fully vaccinated personnel who may go without a mask outdoors while maintaining social distance, according to USFJ spokeswoman Lt. Col. Brooke Brander. Masks are required for the entire U.S. military population while off base in Japan.

Yokosuka Naval Base, homeport of the U.S. 7th Fleet south of Tokyo, accounted for most of USFJ’s new infections, 38, followed by 11 at Marine Corps Air Station Iwakuni near Hiroshima and 10 at Yokota Air Base in western Tokyo. Another 11 installations reported zero new cases, including nine on Okinawa.

MCAS Iwakuni reported 20 new infections Tuesday, according to a base news release on Wednesday. The air station reported 156 cases of the coronavirus respiratory disease in February, about 16% of the 987 cases it announced in January.

U.S. Army Japan, headquartered at Camp Zama southwest of Tokyo, reported 16 people tested positive for COVID-19 between Feb. 23 and Wednesday, according to an Army news release.

Six were close contacts of another infected person and 10 developed COVID-19 symptoms, according to the release.

Kadena Air Base on Okinawa reported 120 total cases on Wednesday, according to an update of its website. It last reported 76 total on Tuesday.

Okinawa prefecture reported 966 new cases Wednesday, down from 1,029 the previous day, according to the prefectural Department of Public Health and Medical Care. The department reported another 19 new cases in the U.S. military population.