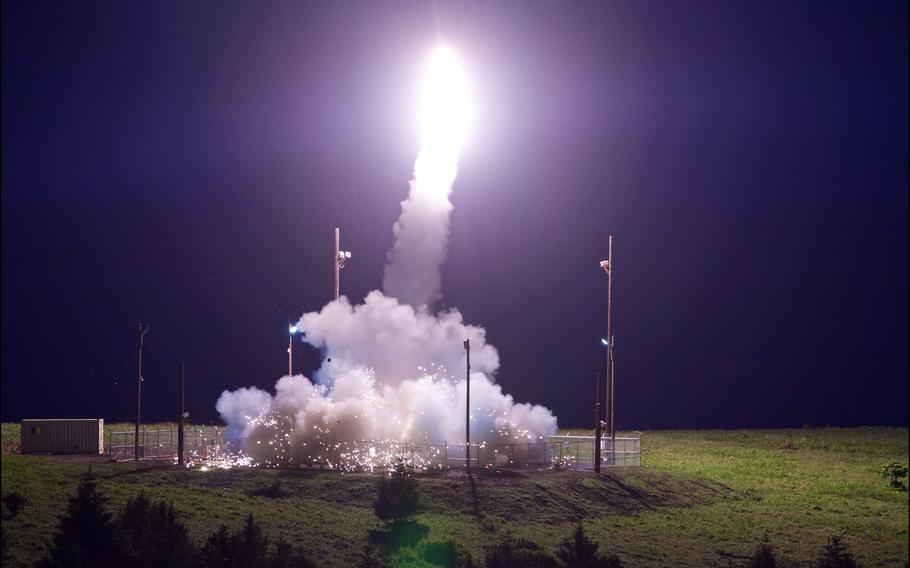 CAMP HUMPHREYS, South Korea — Liberal politicians in South Korea have denounced the conservative presidential front-runner for suggesting that an additional U.S.-made missile defense system be deployed in the country.

Yoon Seok-youl, the conservative People Power Party’s nominee , proposed the deployment of a second Terminal High Altitude Area Defense, or THAAD, system during a presidential debate Thursday ahead of the March 9 election. He cited inadequacies with the one unit deployed about 130 miles south of Seoul.

“THAAD is needed for the capital area, accordingly,” Yoon a former chief prosecutor, said during the debate with three other candidates. The sole THAAD system in South Korea lacks sufficient range to defend Seoul, he added.

South Korean lawmaker Huh Young, chairman of the Democratic Party in Gangwon branch, released a statement Friday that “strongly” condemned Yoon’s analysis and demanded he apologize “to the people.”

“We express deep regret about the remarks of PPP presidential candidate Yoon Seok-youl, who pays absolutely no attention to peace on the Korean Peninsula and the survival of the people,” Huh said.

The ruling Democratic Party in a statement Friday characterized Yoon as someone “who lies about issues directly related to national security” and that he “doesn’t deserve” to run for presidency.

“Yoon must not distort the additional THAAD deployments issue directly connected to security and diplomacy by targeting only votes and trying to cheat the people,” the party’s Central Election Polling Committee said in its statement.

A spokesman for the left-leaning, minority Justice Party accused Yoon of warmongering “without giving a toss about possibilities and effectiveness.”

“We understand Yoon wants to gain votes by talking about security populism and avoiding public anger in those areas,” Oh Seung-jae said in a statement Friday.

Since 2017, a THAAD battery has been stationed at a South Korean military base in Seongju. The $800 million THAAD system, built by Lockheed Martin, is able to track enemy missiles up to 1,864 miles away, but it can only intercept them up to 124 miles, according to the Center for Strategic and International Studies.

Critics of an additional U.S.-controlled THAAD battery have suggested other options, including developing an indigenous version or integrating THAAD with existing South Korean missile defense systems.

Lee Jae-myung, the Democratic Party’s candidate for president and the former governor of Gyeonggi province, clashed with Yoon during Thursday’s debate. Lee urged for “pragmatic diplomacy” and described Yoon’s insistence on an additional THAAD battery as reckless.

Lee also referred to the economic pressure enacted by China in retaliation for the deployment of the THAAD unit in South Korea. China opposed deploying the U.S. missile defense system in South Korea and boycotted the country’s businesses and firms. Seoul estimated the resulting economic losses reached around $7 billion.

“Why are you trying to ruin our economy by installing THAAD in Korea again?” Lee asked Yoon during the debate.

Yoon is leading Lee by 1.8 percentage points, a survey conducted by the Korea Research International agency said, according to local news reports Monday.

The survey had a margin of error of 3.1 percentage points. Around 11% of 1,012 South Korean adults polled between Feb. 5-6 are reportedly undecided.