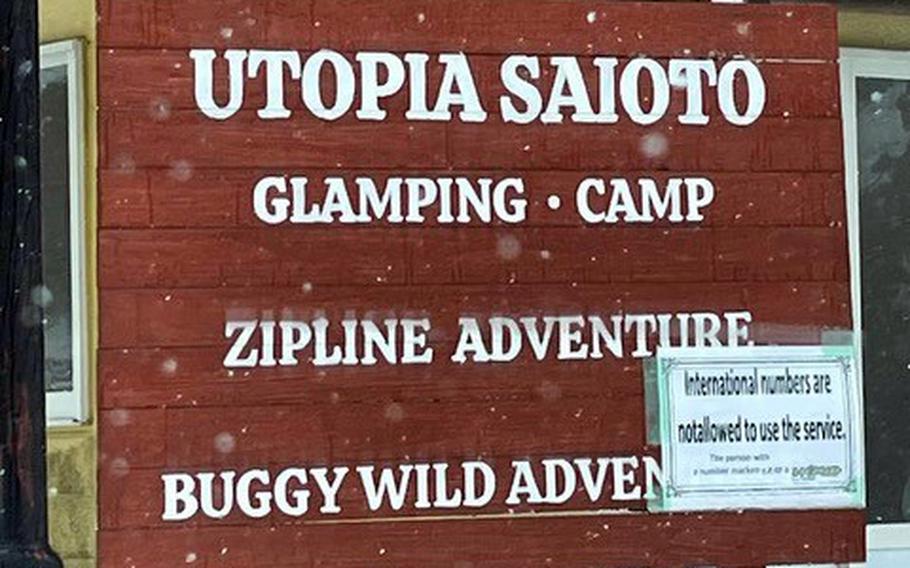 Utopia Saito, a ski area about 60 miles north of Marine Corps Air Station Iwakuni, Japan, is refusing service to anyone in a vehicle with license plates bearing a Y, A or E that indicate it’s associated with the U.S. military. (Hope Carter)

MARINE CORPS AIR STATION IWAKUNI, Japan – At least one ski resort in Hiroshima prefecture is turning away foreigners, specifically anyone affiliated with the U.S. military, apparently due to COVID-19 risks.

Utopia Saito, a ski area about 60 miles north of MCAS Iwakuni, is refusing service to anyone in a vehicle with license plates bearing a Y, A or E that indicate it’s registered under the status of forces agreement. SOFA outlines the rules and responsibilities for anyone in Japan with the U.S. Defense Department.

Being denied entry is “extremely disappointing” for Hope Carter, a spouse at MCAS Iwakuni who is a regular visitor to Utopia Saito along with her family.

“We called around and had trouble finding a place to go,” she told Stars and Stripes over Facebook Messenger on Thursday. “The only two that will allow us in currently are Mizuho and Osarakan.”

Utopia Saito is also discouraging Japanese skiers from outside Hiroshima prefecture from coming to the ski area, as other resorts among the half-dozen in the prefecture are apparently doing, according to a manager for the MCAS Iwakuni outdoor recreation office.

“They are currently not accepting any tours, even local Japanese tour buses,” Outdoor recreation manager Masahiko Hiromoto said Thursday. “We heard an individual went to a ski resort and was refused, so after we heard that we started calling all the ski resorts, because we don’t want to issue the equipment to the customer and they drive two to three hours to the ski resort only to be refused. That’s sad.” 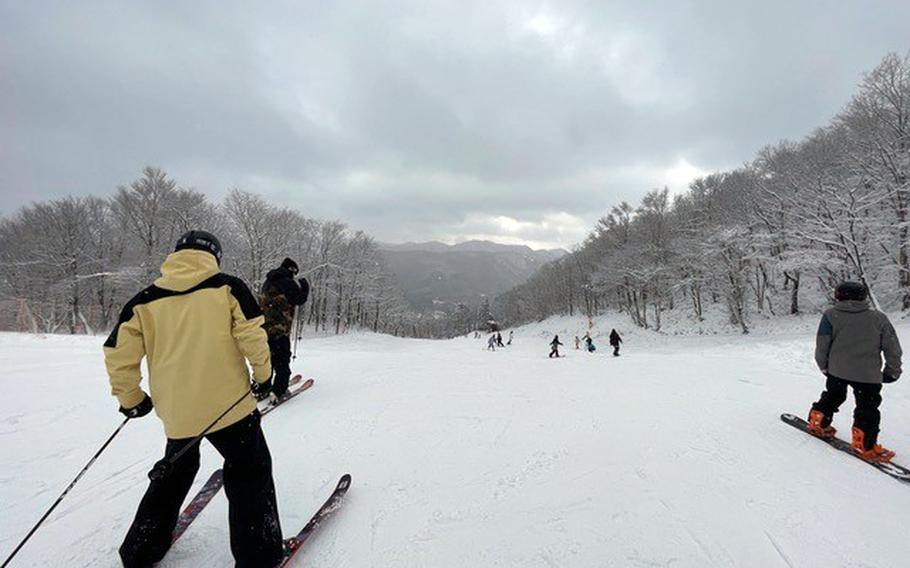 Skiers and snowboarders make their way down a slope this season at Megahira ski resort in Hiroshima prefecture, Japan. (Jonathan Snyder/Stars and Stripes)

U.S. service members, DOD civilian employees and their families emerged Jan. 31 after being confined for three weeks to their installations or their off base homes at the Japanese government’s request.

The stay-at-home order, with exceptions for essential services, arose after reports in December of SOFA members arriving in Japan and immediately testing positive for COVID-19. After three weeks of no outside travel, except for essential services, many Americans turned to Japan’s renowned ski slopes for overdue outdoor recreation.

The Carters drove almost two hours to Utopia on Feb. 1 only to have an employee signal an “X” with their arms and point to the sign, said Hope Carter, whose husband, Marty Carter, works for Marine Corps Community Services at MCAS Iwakuni.

Hiroshima and neighboring Yamaguchi prefecture are under a quasi-emergency until Feb. 20 that encourages businesses to take measures to quell the spread of COVID-19. The omicron phase, the sixth wave of the coronavirus in Japan, is setting record-high case numbers across the country.

Under the quasi-emergency, which is in place in 34 of Japan’s 47 prefecture, residents of one prefecture are discouraged from traveling into other prefectures.

A representative of Utopia Saito did not return phone messages left by Stars and Stripes on Thursday, Friday and Saturday.

Another resort, Megahira Ski Area, about 30 miles north of Iwakuni, is also discouraging foreigners and Japanese skiers from outside the prefecture from coming to the slopes.

“Megahira ski resort is asking people living outside of Hiroshima prefecture to refrain from visiting the resort due to quasi-state of emergency declared in the prefecture after COVID-19 infected cases increased rapidly in the country,” a spokeswoman for the resort told Stars and Stripes by phone Thursday.

She said that they want people, not just U.S. military personnel, but anyone living outside of the prefecture to refrain from coming until the quasi-state of emergency is lifted.