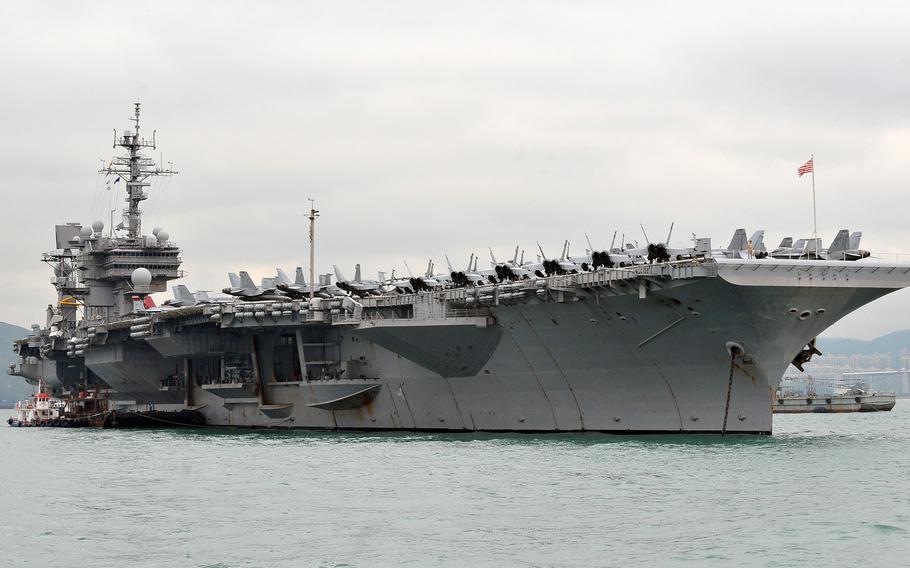 The USS Kitty Hawk in Hong Kong on April 28, 2008. As an assistant chief of staff for operations aboard the Kitty Hawk, former Capt. Donald Hornbeck exercised his influence over contracts to steer Navy business to Singapore-based contractor Leonard Glenn Francis, nicknamed for his girth.  (Mike Clarke/AFP/Getty Images/TNS)

SAN DIEGO (Tribune News Service) — The fourth of nine Navy officers who were headed to trial in the "Fat Leonard" bribery scandal pleaded guilty on Wednesday.

Former Capt. Donald Hornbeck, 61, pleaded guilty in San Diego federal court to one count of bribery of a public official, one month ahead of the expected trial start date. The plea has been in the works for a while — his lawyer implied a guilty plea was imminent back in November, and a previously scheduled change of plea hearing was canceled last month due to COVID-19.

In the plea agreement, Hornbeck admitted to using his position to steer Navy business to Singapore-based contractor Leonard Glenn Francis, nicknamed for his girth. In return, Hornbeck was bribed with extravagant dinners, luxury hotel stays and hedonistic parties with prostitutes, at a value of at least $67,000, according to court records.

On several occasions, Hornbeck was one of Francis' top go-to advocates inside the Navy. Emails show Francis asking Hornbeck to divert Navy ships to Southeast Asian ports Francis controlled — including what ended up being a $1.85 million visit by the Kitty Hawk to Port Klang, Malaysia, in 2007.

In later emails, Francis leaned on Hornbeck to resolve billing disputes between the Navy and Francis' company, Glenn Defense Marine Asia. It was later determined that Francis' company had fleeced the Navy out of at least $35 million over the years.

Hornbeck also repeatedly hit up Francis for a job.

In one 2006 email, Francis asked for Hornbeck to exert pressure on the Navy to send the aircraft carrier Abraham Lincoln to Laem Chabang, Thailand, according to the indictment. Hornbeck responded by asking if Francis was hiring in San Diego, adding: "[I]f there is anything I can do for you, please don't hesitate to ask."

In 2008, Hornbeck again asked whether Francis was opening a San Diego office and that he would "very much be interested in being a part of that."

The email came a day after an $18,000 evening of fine dining — featuring an eight-course meal of black truffle soup, caviar, duck liver and Wagyu beef — and entertainment with other officers in Hong Kong.

Francis tried to diplomatically lower Hornbeck's expectations of a job, citing a downturn of Navy spending affecting his bottom line, according to the indictment.

Hornbeck, who lives in the Indianapolis suburb of Greenfield, has agreed to pay the government restitution — possibly $67,830 — as well as a $37,500 fine.

Hornbeck is the 29th person to plead guilty in the San Diego-based prosecution, including Francis. There are five remaining officers with whom he was indicted alongside who are preparing for trial, which would be the first in the case.

It is unknown if Hornbeck and some of the other officers who've recently pleaded guilty will testify. However, Francis is expected to, and prosecutors this week indicated sex workers may also be taking the witness stand, under pseudonyms if allowed.