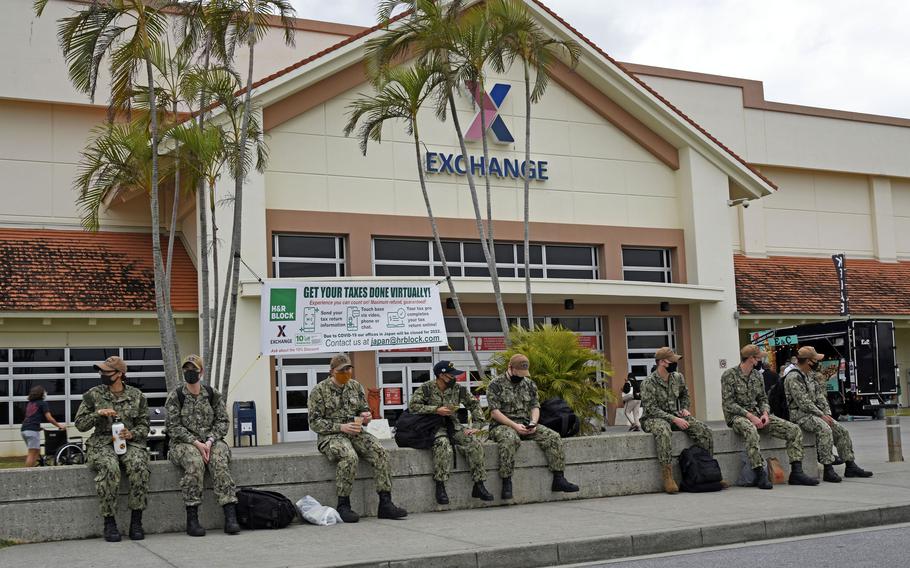 Service members wear masks as they relax outside the exchange at Kadena Air Base, Okinawa, Friday, Jan. 21, 2022. (Frank Andrews/Stars and Stripes)

TOKYO — The U.S. military authority in Japan has extended a stay-at-home order until Jan. 31 for its service members, civilian employees and their families as COVID-19 continues to spready quickly throughout the nation.

“This decision was made out of an abundance of caution to protect all personnel from rapid spread of COVID-19 in local communities,” U.S. Forces Japan announced on its website Friday. The original two-week order was scheduled to expire Monday.

Omicron, while creating milder symptoms and fewer hospitalizations than previous variants, continues to infect record numbers of people in Japan. But case counts within the U.S. military are flattening and, at many U.S. bases, numbers are falling, according to USFJ.

“The stringent COVID-19 mitigations implemented in December have effectively stalled the spread of the virus on U.S. installations,” said Friday’s statement.

Under the stay-at-home order, U.S. personnel are prohibited from most non-duty travel beyond the gates of their installations or outside their homes if they live off base. Essential services, such as grocery shopping, religious services, medical or veterinary appointments, school and auto repairs, for example, are permitted. Personnel living in Japanese communities are also permitted to run or bicycle as exercise.

The order includes a 10 p.m. to 6 a.m. off-base curfew that was imposed as a separate measure. 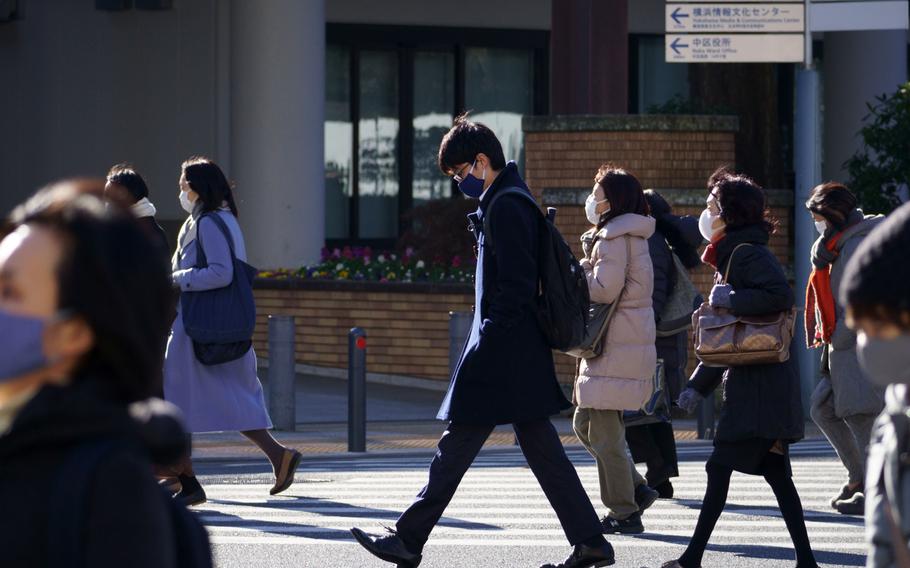 Another 14 prefectures, including Osaka, where case numbers are also setting records, have petitioned the national government to include them in the emergency that began Friday, according to The Mainchi newspaper.

It’s a “very political and alliance issue,” he said Friday during a virtual town hall meeting on Facebook.

The original order followed discussions between the U.S. secretaries of state and defense and their Japanese counterparts after Americans returning to Japan after the holidays brought new COVID-19 cases with them.

Also Friday, USFJ reported another 550 new cases of the coronavirus respiratory disease at 18 U.S. installations throughout Japan. Another 17 cases were pending confirmation.

No one within the U.S. military population is hospitalized or considered seriously ill, according to USFJ.

Yokota Air Base, the headquarters of USFJ, reported the day’s high with another 88 people infected with the coronavirus, according to the command. Separately, Yokota on its website reported 101 people tested positive on Wednesday and Thursday, with 274 active cases Friday.

“I think I can sum up how most people feel right now in one word and that’s exasperated,” base commander Col. Andrew Campbell said Friday on American Forces Network Radio. “I think there’s exasperation not only with the challenges we face being stationed overseas but I think there’s a lot of exasperation just across the globe with another round of COVID variant that’s upsetting not just people’s health but people’s lives in a lot of different ways.”

He asked for “patience, kindness and grace” from the people at Yokota.

On Okinawa, Kadena Air Base reported 74 new positives and the Marine Corps’ Camp Hansen, where the military reported an early cluster of the sixth wave in mid-December, reported 45 new cases, according to USFJ.

Yokosuka Naval Base had 64 Friday but on its Facebook page reported 608 new cases during the week.

Prior to the stay-a-home order, USFJ on Jan. 6 raised its heath protection level to Bravo, a higher risk of the coronavirus spreading. Under Bravo, the command imposed a mask mandate for U.S. personnel on base, with some exceptions, and everywhere off base.

Defense Department schools in Japan, although previously closed under condition Bravo, will remain open, according to a Friday notice to parents and staff from Pacific East superintendent Judith Allen of the Department of Defense Education Activity. Allen wrote that mitigation measures at each school are sufficient to allow in-person schooling.

Omicron, the currently dominant coronavirus variant, is more easily transmitted but causes less severe COVID-19 symptoms that its predecessor delta, according to U.S. military medical professionals in Japan. Omicron surfaced in November and quickly spread around the world. Japan was reporting cases in mid-December.